Living in London? It’s an exercise in ignoring human suffering 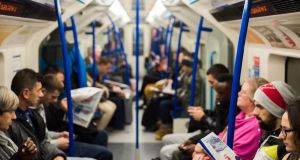 ‘The people seated in the carriage, simmering with discomfort, shame, disgust, and whatever else, assume a frightening stillness.’ Photo: istock

Living in London is an exercise in ignoring human suffering. The same is true of any large western city. Whether you ignore it callously, or steadfastly, or reluctantly, the result is the same.

One morning last week, while trying not to absorb the frenzy and crush of the morning commute, I noticed a carriage on the underground that appeared less full than the others.

Anyone who gets public transport during morning rush hour knows the frantic tumult; the lack of space, the medley of hot, sour breath and body odour, the discomfort as social norms around physical contact are suspended and everyone shoves and presses into their neighbour with an unsettling intimacy that we barely tolerate.

There, lying on the floor was a homeless man. He wasn’t unconscious, thank goodness, and he didn’t appear to be physically hurt

Naively, I headed to the carriage that looked less full – there was standing room inside the doors, an area usually so barricaded by stressed-looking, standing commuters that when the doors open there isn’t an inch of free space inside, just the spooked, rolling eyes of the people trying to lean back far enough to ensure that the doors don’t shut on their noses.

When I stepped in, I realised why the space had looked empty through the window. There, lying on the floor was a homeless man. He wasn’t unconscious, thank goodness, and he didn’t appear to be physically hurt or obviously intoxicated. On the contrary, he was lying on his side with his head propped on his hand and his elbow resting on the floor.

The pose was that of the infamous golden-haired lady in Titian’s painting Venus of Urbino, except without the chaise and, thankfully, with clothes. “Look at me” her expression says as she makes direct eye contact with the beholder, “I f***ing dare you”.

The pose was just as strikingly effective here. I couldn’t decide whether this man, visibly filthy from an evidently cruel life on the street, was a genius, or mad, or both. Here, on one of the busiest commuter trains of the day, he had decided to lie down on the floor and occupy enough standing room for seven people.

Not a single person asked him to move or addressed him in any way. He had figured out a way to weaponise his own invisibility against people who pathologically refuse to see him.

If you stay on certain trains in London long enough, you can witness five or six different homeless people – almost always men – board and address your carriage. They speak loudly of what they’ve lost, their eyes flicking across the crowd, seeking a place to stop. Sometimes they say they are military veterans, addicts or victims of abuse. They beg; sometimes for food, more often for money. The people seated in the carriage, simmering with discomfort, shame, disgust, and whatever else, assume a frightening stillness. They arrange their faces. They stare ahead as if these men do not exist, as if they are not there entreating them to share something of their more comfortable lives. Occasionally, someone cracks and hands over some change. Generally, the men shuffle away at the next stop, to try their luck on the next carriage, and people unfreeze and return to their functional complacency.

I’m no better. I don’t know what to do either. If I acknowledged all the suffering I see on the streets and public transport every day, if I gave money to everyone I encounter who needs it, I would be undone in more ways than one. We all would.

The problem is so vast, so shameful, and so desperate that shutting down is a comprehensible, if inhumane, response in order to cope with it. The response is something none of us should feel proud of, but it is the default.

These people – and in this instance, this man – are the most invisible among us. The most vulnerable. As he lounged on the floor, he looked as though he had absorbed that socially imposed invisibility to such an extent that he was behaving as if it was really true that no one could see him. He was so invisible that his invisibility became a power in itself. He could do whatever he wanted, because people would ignore anything so as not to have to witness his desperation.