‘You could do anything with that blank page, which is horrifying’ 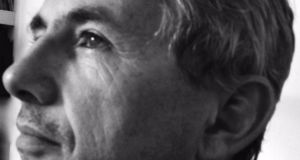 David Hayden has one of those enviable Twitter accounts that seems to be little but photographed pages of books you would very much like to read some day. Hayden, born in Dublin but now living in Norwich, has spent a good part of his life working in bookshops and at various publishers. That career has taken him across the world, with several years in Australia as well some spent trekking across south Asia for a Japanese publisher.

Upon arriving in Australia, he made a list of 50-odd Australian authors and read them all, just to familiarise himself with the local scene. The names of writers both popular and obscure, new and old, pop up continually in conversation with him. He is, he says, an inveterate recommender. It seems like he’s good at recommending books because he’s spent his life trying to read all of them.

Darker with the Lights On, Hayden’s first book, a collection of 20 stories, wears this erudition lightly. It does not readily give up its influences. It could be called a modernist collection, certainly, because it is self-conscious, it thinks out loud, it is “experimental” – which is to say that it is trying things out, it’s looking for something new.

While the settings of many of the stories in Darker with the Lights On might be inferred, they are never named. They seem distorted in enigmatic, cryptically important ways. Hayden describes this process of defamiliarisation as a “peeling back”, a way to make the stories stronger both as stand-alone texts, and as a complete collection.

“When I took that specificity away, I ended up with something that became much, much more interesting, more uncanny, and more generalisable to people’s experiences of different kinds of discomfort,” he says. “Taking the specifics out, the recognisable accents and language, for me anyway it made it more interesting, it made it stronger, it made it possible to develop the theme of the story more strongly.

“Sometimes I think specifics – the identifiable place or voice, tone – can work to make the story stronger and become parts of the sinews of the narrative, but in some cases they actually become what you focus on, and a misdirection from the heart of the story. So what I try to do with each story is for it to reside within itself in as concentrated a way as possible.”

“Concentration” is a theme that Hayden returns to again and again in describing these stories. Their intricate sense of patterning, the way they seem driven as much by the words as the ideas, corresponds with what Hayden calls a “concentration of the resources of language.”

Hayden brings an intensity to the sentences which requires a certain scrutiny – not everything is as it seems. There is something going on behind the words, between them. The effect is of feeling very close to the voices we’re hearing as we read, listening intently as whatever fragment of their story unfolds.

“When I read through a story, if I find anything that sounds overfamiliar, unintentionally, then I’ll rewrite it,” Hayden says. “I’ll take it out because it weakens the lines. You want to hold the space, really, as a writer of a story, and to use a term that Claire Keegan uses, it’s a piece of time. A story is a piece of time. That might be narrative time, but for me it’s mainly the time that the reader is engaged in the story. That is really, really important to me, compositionally.”

Hayden compares Keegan to others he admires, giants of the short story such as Chekhov or Eudora Welty, and says they share an ingenuity, what he calls a “means”, which is entirely and unmistakably their own.

“The thing that strikes you most about those is just how original they are,” he says. “Time after time. How they just hold that. For the readers that like that kind of voice, that kind of approach. Lots of readers hate short stories, but for those of us that are in, they’re doing something extraordinary again and again and again. Obviously my aspiration is to be able to do that. To hold the reader in the ways that are original to me.”

Hayden, as someone who has spent a good deal of his life working in bookshops and at publishing houses, is all too aware of the regard in which short stories are held by the mass pool of readers that larger publishers are concerned with reaching. He quickly fires off a list of reasons for this: they’re over as soon as they start, there’s little or no development of character, sometimes they simply don’t make sense. He acknowledges and understands people’s hesitancy to embrace the shorter form.

“They want to read fiction for an immersive experience, and actually you don’t get that with the short story in that kind of way. What you get is a feeling of being persistently discomfited. An awful lot of the impact of a short story happens after the last word, in the silence after the story has ended. A lot of the work of the story happens right there, and that’s often quite an uncomfortable space.”

Darker with the Lights On, however, revels in the discomfiting, the unpredictable, the ambiguous. Each story appears fully formed, a resolute little capsule of mood and voice. They cohere only through their inscrutability, their mischievous humour and a glimmering thread of concern about fatherhood, masculinity and inheritance. They never reveal a formal tick, a unifying logic. Each opening sentence feels like a gambit, with no indication of what will follow. Each story is, in an exciting, trepidatious sense, an adventure into the unknown.

He laughs, catches himself, and begins once again to qualify, to concentrate.

“You could do absolutely anything with that blank page, which is pretty horrifying. But also, potentially, on the right day, it’s very exciting. If you can convey that onto the page, then you might have something that’s worth other people reading. That’s what I hope for.”

Remembering Jimi Hendrix 50 years on: the guitar god and the Irish connection
6

Dan Mallory, the fiction writer who made up stories about his own life
7