Portrait of the artist as a poet and playwright too

I think all my work, painting, poems and plays are expressive of whatever passion I’m feeling, says Anne Le Marquand Hartigan 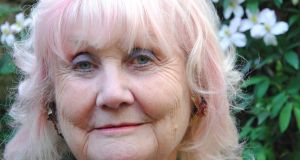 Anne Le Marquand Hartigan: Poetry is often a moment of passion, written speedily, flowing from the heart and mind. A play is a longer dance

To act was my first love. Not loved by my father, who certainly did not encourage it. So I trained as a painter in the art school of Reading University, acting in student productions, and leaving to marry before the end as my husband-to-be, who was in the army, was being posted abroad.

It was a very good art school because we were taught to look. There was a lot of emphasis on life drawing and you had to observe and record with intelligence, not necessarily realistically, not naturalistically but truly.

Why did I get involved in so many different areas of the arts? Life made it so. I married and had five children in six years and a sixth in the late ’60s. We moved to Ireland in 1963. My husband left the army because he was in love with Ireland. Being similar to myself, his father was Irish, his mother Scottish, my father was Jersey French and my mother was Irish. I’m really happy about my origins. I feel it’s powerful to have Irish and French blood.

When we arrived, mainstream Irish painting was far removed from the modern movement of Matisse, Picasso and Chagall which I had been taught through. It was another world. There were modern artists, of course, but I didn’t find them for a long while and I felt isolated. I eventually discovered a modern artist in the farm next to our own who had trained at the Slade. He and I submitted work to the Irish Exhibition of Living Art in the same year and were both accepted and that was exciting. There we encountered other artists who were working in a more modern style. I had a studio on the farm and I carried on painting. Having a big family of small children and painting was difficult, it took a lot of energy. The pram came into the studio. It was fun, it was great, it inspired me too but parenting took up time. It meant I didn’t get myself established in a way I would have wanted to but I did exhibit in the Living Art and the Oireachtas and so on.

I liked to paint big canvases but oil paints and turpentine are dangerous for children. One of my sons knocked himself out on the smell of turps one day. Apparently if that happened now I’d probably be locked up! A poem can be written on the corner of the table; painting needs a room. In Ireland the word was king. The poet was the dancer of words, the singer and the song. The paintings continued, but I wrote more easily.

I’ve published seven books of poetry. The themes are pretty similar: life and death. You mostly write about love and loss. It’s about the things that really move you in life. One book, Return Single, is a lament for a broken heart. If you break up you do return single, and it’s pretty hellish. I write mainly about human emotions.

I don’t think poetry gives you a different scope to plays – one is the individual voice speaking, or laughing, or shouting out or screaming at someone, and the other is the same voice but with more people talking. It’s not just about dialogue, you play around in quite a different way. You have to people the stage, see the space between them, see their passion, their tension.

Behind all creative work lies love and passion, which finds the form to express it in. So when a dear aunt spent the last year of her life in a nursing home, it became the landscape for my first play, I do Like to Be Beside the Seaside, a romance about a couple who meet again in an old people’s home and renew the love that they’d had. Under threat of being parted they take a terrible decision with dramatic consequences. It’s about being in love when you’re older and my experiences of being in love. The characters demanded me to write a play for them.

Poetry and plays have different starting points. Poetry is often a moment of passion, written speedily, flowing from the heart and mind. A play is a longer dance. I seldom write realistic plays but use non-realistic forms to express the emotions. The themes of my plays can almost be dictated by the characters. In poetry the themes are dictated by life at the moment. A poem comes with a given line. A line comes into my head. If I do not take it straight away, the poem escapes and is gone. It is a gift you must take or you will lose it.

Beds was my first professional production at the Dublin Theatre Festival in 1982, tracing life from pre-birth to death. The structure and staging on three double beds was profoundly influenced by Kantor and contemporary Polish theatre.

Beds explores the roles played by husbands and wives, mothers and fathers, sons and daughters, a theme shared by a short play, Strings, and which crops up again in In Other Worlds from 2003. Here an undercurrent of criminality and unrevealed secrets echoes The Secret Game in 1995. This earlier play, where a woman is held captive overnight by a young Northern Irish terrorist, brings the topical issues of abortion and terrorism together. It’s fairly realistic although there is a surreal element.

The two plays I wrote about wartime Jersey are far more surreal. Initially written as a long poem, La Corbière was sparked by a terrible incident. When a boatload of French prostitutes was shipwrecked on La Corbière rocks and drowned, no one rescued their bodies. They were seen floating on the sea for days. That they were seen as throwaway people filled me with horror. My play is a requiem to them. It came straight from the poem. I had to get these women on shore and redeem them, let them live, give them back their hearts and souls. Later in 1996, I returned to them in the trilogy, Jersey Lilies. It opens with the original poem, followed by two plays which grew from their characters, a slave, brutally murdered and buried in the very walls of the underground hospital he was building and two extraordinary women of the Jersey resistance, a surrealist photographer and her sister.

I think all my work, painting, poems and plays are expressive of whatever passion I’m feeling. It’s trying to use one’s own passions and loves and hates creatively, the complexities of life. Each one is a separate and different creation but they all come from the same source and interior passion and life. Now I’m just beginning to give a bit of time back to the visual. Now I have plenty of time, but I’m plenty old!