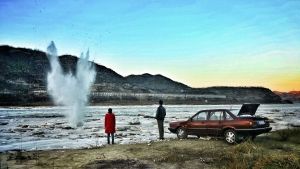 It is impossible not to marvel at the scale and scope of Jia Zhangke’s eighth feature film.

On the eve of the millennium Chinese youngsters dance to the Pet Shop Boy’s cover of Go West.

Liang has a rival, a self-regarding entrepreneurial capitalist named Jingsheng, who, to add insult to injury, gets the girl and buys the mine where Liang works.

When Zhang and Tao have a son, he nauseatingly insists they call him Dollar. Jump forward 15 years and the marriage has ended precisely as one might suppose: with a much younger, westernised second wife. Eleven years after that and Dollar, a college dropout, is struggling with mommy issues in Australia.

Writer-director Jia Zhangke emerged from China’s underground cinema to become one of the most prominent filmmakers from the People’s Republic of China’s “sixth generation”. Since winning the Golden Lion at Venice in 2006 with Still Life, he has gained considerable international standing: to date, five of his films have been selected for competition at Cannes and John Powers, the senior critic at Vogue, has called him “the most important filmmaker working in the world today”.

It is impossible not to marvel at the scale and scope of Jia Zhangke’s eighth feature film, a huge multigenerational drama that might easily be called “China” and that seeks to emulate what Hao Hsiou-Hsien has down for Taiwan or what Rainer Werner Fassbinder did for West Germany. A triptych with chapters set in 1999, 2014 and in 2025, Mountains May Depart simultaneously presents as an Oedipal drama, a national allegory, and futuristic science fiction, roughly in that order.

The final section is problematic. There are odd tangents: what’s the deal with the aircraft going down? There are moments also when the rather bald metaphors recall The Simpsons’ episode featuring a Chinese production of Death of a Salesman in which actors prance across the stage with banners that read “American Dream”.

Against this, viewed for a second time –a full two years after its Cannes premiere in 2015 – all those complaints dissipate. This is an extraordinarily beautiful film with lush, occasionally radical cinematography from Nelson Lik-wai Yu (A Simple Life), profound things to say about the immigrant experience and a commanding performance from Zhao Tao, a turn that ought to have won every single award going, including the Nobel Prize for chemistry, if that were at all possible.