Without cinematography and editing, there’s no such thing as a film

Donald Clarke: This week’s Oscars news reflects the common, idiotic view that cinema is little more than a type of flat theatre that you can now watch on your telephone 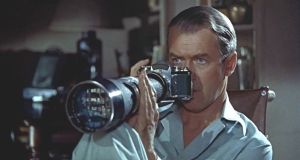 James Stewart in ‘Rear Window’: Hitchcock’s film is on the Leaving Cert syllabus, btu exactly about the film is being studied

The Oscar muck-up continues as anticipated. Last week, John Bailey, president of the Academy, appeared to confirm that: “four categories – Cinematography, Film Editing, Live Action Short, and Make-up and Hairstyling – would be presented during commercial breaks.” The Academy later stressed that the winner’s speeches would be snuck into the live broadcast.

It was noted that Bailey is himself a cinematographer. None of this dulled the fury. The disrespect shown to the make-up people and the short film-makers (including Irish nominee Vincent Lambe) soured an already grim atmosphere.

It was, however, the apparent disrespect to editors and cinematographers (including Irish nominee Robbie Ryan) that really caught in observers’ craws. Many were the insiders offering persuasive defences of those vital professions, but, as is so often the case, it was Russell Crowe who put it most eloquently. “It’s just too f**king dumb for words,” he wrote.

It seemed that, in future, four to six categories would be omitted from the live broadcast on a rotating basis. The four listed above would play out live in 2020. This information didn’t much deaden the offense. Come back to us when best director plays in the ad break. It would be different if Glenn Close (1/6 with Paddy Power) were to finally get her first Oscar while Chevrolet was selling us pick-up trucks. The downgrading of editing and cinematography is undeniable.

All this is in keeping with the common, idiotic view that cinema is little more than a type of flat theatre that you can now watch on your telephone. Storytelling and drama are – according to this view – all that really matter. To mix our literary metaphors further, a film is like a book and the editor and the cinematographer are akin to printers and booksellers. You can’t get the story to the reader without them. But they are facilitators rather than active participants in the creative process. You recall the old joke about the ambitious starlet who was so dumb she slept with the writer? The cameraperson or the editor would be lucky to even be invited to the same party.

Martin Scorsese never fails to genuflect before his long-term editor Thelma Schoonmaker. “We live through every film together and every film is a whole lifetime in and of itself,” he said before she received her Bafta fellowship last weekend. So much of the Scorsese aesthetic is defined by Schoonmaker’s elegant cuts. When people talk about Ingmar Bergman they often talk about the shallow Scandinavian light carving sharp contrasts in the monotone images. That’s at least as much to do with cameraman Sven Nykvist as it is with his more famous compatriot.

The Academy has, over the years, contributed to the ignorance by repeatedly concluding that, in these two fields, “best” is synonymous with “most”. Why, this year, is Alfonso Cuarón nominated for his direction and cinematography on Roma, but not for co-editing the film? Because the monochrome camerawork is ostentatiously beautiful and enormously complicated, but the editing is relatively discreet. The shots are long. So the cuts are few. The voters don’t seem to consider that the less showy skills required to dovetail two lengthy shots are every bit as praiseworthy as the talent required to edit a furious car chase. In recent years, the film editing award has consistently gone to action films: Dunkirk, Hacksaw Ridge, Mad Max: Fury Road, Gravity. Dare one suggest that Schoonmaker’s editing on The Age of Innocence (no nomination) is the equal of her work on The Departed (win)?

Too many film critics are also culpable. I plead guilty to treating dramatic interactions in great depth and then adding perfunctory mention of sound design and cinematography. We’re all to blame.

The inclusion of films on the Leaving Certificate English syllabus – though commendable in some ways – only adds to these misconceptions. I am pleased to read that Asghar Farhadi’s About Elly and Alfred Hitchcock’s Rear Window are on the 2019 list (though Tom Hooper’s Les Miserables can go to blazes). Their presence will offer opportunities to analyse the storytelling structures. Films are, however, not literature. You could make the case that a screenplay meets the definition. You could make the case (some post-modernists have) that the phonebook is literature. But a film is a work in which a range of visual and aural elements – editing, camerawork, costumes, sound design, even acting – come together in creative synthesis. A good story may be told. Something quite different might emerge. You may as well include a record album or a painting on the English syllabus.

What do you know? Late on Friday night, for the third or fourth time this awards season (following backtracks on the “Oscar for popular film” and one on an apparent desire to change the tradition whereby the previous year’s acting winners give out their successors’ awards) the Academy did a humiliating U-turn and announced that all the awards would be televised live after all.

How do you think this is going, Mr Bailey?