Only maniacs and journalists stay up to watch the Oscars

Donald Clarke: The academy has been tying itself in knots trying to reverse a decline in ratings 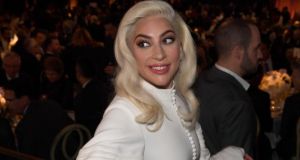 The latest rumour is that Lady Gaga suggested she wouldn’t sing at the Oscars awards ceremony if her competitors were not also allowed to perform. Photograph: Kevork Djansezian/Getty Images

The ongoing efforts to increase viewership of the Oscars are of little practical interest to most Irish people. Only maniacs, journalists and relatives of the nominees stay up to watch the thing live here. Most of the stuff they’re threatening to cut gets cut from the highlights anyway.

Trust us. The academy has been tying itself in knots trying to reverse a decline in ratings. It’s much less important than the UK government’s Brexit negotiations. One nonetheless gets the same sense of an organisation engineering a construction that will satisfy none of its intended users. Last week, to nobody’s surprise, the academy “crashed out with no deal” and confirmed that it would not have a host this year. Does that matter? Well, the last ceremony with no compère, in 1989, is the most derided ever. That was the one that began with Rob Lowe singing Proud Mary to a sexy Snow White. Toes still curl at the memory.

To be fair, the absence of a host – following Kevin Hart’s ignominious withdrawal – was not part of the plan, but the rumoured response fuels suspicions that the academy is seeking to reform the Oscars by excising all the good bits. Deadline Hollywood reported there were plans to ditch the tradition of having the previous year’s winners hand out the acting awards, although the Academy was "thrilled to announce" on Thursday that Gary Oldman, Frances McDormand, Sam Rockwell and Allison Janney will do the honours after all.

Memories of the New Coke fiasco rise unwelcomed to the surface. Fans of that soft drink rejected the sweeter formula in 1985 and there is no sense that Oscar enthusiasts are feeling any warmer about the current changes.

This unhappy saga kicked off back in August when the organisers – at the apparent command of broadcasters ABC – announced an imminent Academy Award for outstanding achievement in popular film. The 2018 ceremony had attracted just 26.5 million viewers – 16 per cent less than watched the previous year and the lowest in Oscar history. One explanation was that the relatively obscure films up for prizes turned off potential viewers. Critics applauded the rise of more eccentric pictures such as Phantom Thread and Call Me by Your Name. ABC saw the absence of genuine box office smashes as alienating the mainstream. Hey, who’d watch the Super Bowl if it were between the the Spokane Jaguars and the Piscataway Greenhorns (or whatever those cities’ football teams are called)? In truth, all such awards ceremonies have declining figures. Most live TV has declining figures. Pandering to the lowest denominator will not reverse that.

Few bad ideas have perished so rapidly as the Oscar for popular film. The ridicule was immediate and enormous. If box-office figures were to decide the longlist – and how else would you do it? – then you may as well decide the winner in the same fashion. Just give it to the year’s highest grossing movie. The award felt enormously patronising and, as a few contenders noted, it could damage some mainstream films’ chances in the adult race. Members could now vote for Black Panther in popular picture and keep their best film votes for dramas about poor people playing the viola. The new award was gone within weeks.

The academy’s wrongheadedness was equalled only by its spinelessness. A recent kerfuffle over best original song seemed to confirm that diagnosis. We know that the organisers are committed to keeping the show to three hours – length being seen as another turn off – and, in late January, Variety reported that, to help achieve this end, only two of the nominated songs would be performed. “Multiple sources” told the trade paper that Kendrick Lamar and SZA’s All the Stars from Black Panther and Lady Gaga’s Shallow from A Star Is Born, the two biggest hits among the five finalists, would get their moment and the other three would make do with a mention before the opening of the envelope.

Few outsiders know quite what then happened, but the delicious rumour – too good to disbelieve – is that Gaga suggested she wouldn’t sing if her competitors were not also allowed to perform. At any rate, following an apparent backtrack, all the tunes will be heard. This does, however, make it all the more likely that the plan to announce technical awards during commercial breaks will stay in place. Family and friends of our own Robbie Ryan, nominated in best cinematography, may have to wait until after the ads to find out if he has triumphed.

The overwhelming sense is that the Oscars are being stripped of their defining characteristics. People aren’t watching this; maybe people will watch something that isn’t this. They may as well rename it Oscar Island, people it with young folk in bikinis and give the statuette to the last person voted out by the public.

Did I just say that out loud? Let’s hope nobody’s listening