Review: The honkingly unsubtle dialogue is not worthy of Rosamund Pike’s steely focus 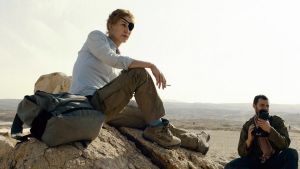 Rosamund Pike and Jamie Dornan in A Private War

Anyone planning a film about a war correspondent would be well advised to avoid the cliches that hang around that profession. They drink too much. They’ve seen too much. They make life hell for their editors, but the copy is so good all excuses are allowed. They’re even more addicted to danger than they are to alcohol and cigarettes.

Hell, they feel properly alive only when they’re in the killing zone. “You any good?” someone is sure to ask. “The best,” they are certain to reply.

The problem for Matthew Heineman and Arash Amel, director and writer of this largely effective biopic, is that the late Marie Colvin really did seem to live that life. Colvin, who was assassinated while covering the Siege of Homs in 2012, was a foreign affairs correspondent for the Sunday Times. Fools were suffered less than gladly. Danger was no object. The snippet of dialogue above really does appear.

It’s not quite enough to say: “There are such people.” The film-makers need to find some fresh angle on the semi-myth. Assisted by a fine central performance from Rosamund Pike – whose focus is steelier than any contemporary – Heineman has managed to build a character that stands apart from those Graham Greene stereotypes. It helps that Colvin was a woman in a man’s world. The script allows hints of the person who, writing in Vogue about her preference for fine underwear in the trenches, described how she dreaded becoming “this smelly, exhausted pseudo-man”. Pike creates a person who is at least the equal – usually the superior – of the men around her, but who also remains separate, singular, at an angle. She moves with an assurance that never gives in to swagger.

It also helps that Colvin, unlike so many damaged predecessors, actually faced up to the reality of post-traumatic stress disorder. Much of the film’s closing third is taken up with attempts to process the psychological damage she has suffered. The title feels multi-edged. Colvin is at war with the forces of chaos, those standing in the way of the truth and – the most personal conflict of all – her own, internal traumas.

Director of Cartel Land, a documentary on the Mexican drug trade, and City of Ghosts, concerning the fight against Isis, Heineman understands some of the pressures Colvin endured, and the footage of the war zones is convincing: grey smoke breaking the path of his drones; the sound design a clutter of chaos; pathos beneath every pile of rubble.

Pike’s combination of rugged determination and reluctant vulnerability should have earned her more awards love this season. Robert Richardson, thrice winner of the Oscar for cinematography, brings all his skills to a hugely complex job.

Amel’s script is, alas, not quite worthy of those interpreting it. Having managed to make something individual of a potentially familiar character, he goes on to litter the dialogue with honkingly unsubtle constructions. Though the screenplay is not nearly so laboured as that for Amel’s notorious Grace of Monaco, the action is too often drowned out by sickening clunks in the narrative machinery.

Somebody really does note that journalism is “the first draft of history”. Colvin’s attraction to danger raises talk of “a moth to the flame”. There’s no shape to the story, bar the baggy shape of unhappy reality.

A Private War is, nonetheless, packed with fascinating observations on how journalism has changed and how it has stayed the same. At the beginning of the story, “online” is still a mere companion to “print.” Gossip hasn’t yet crowded the meaty stuff to the wings. But there’s a terrible familiarity to the weary sigh that Tom Hollander, playing Colvin’s editor, emits when he decides to downgrade his initial choice in favour of the war correspondent’s scoop. “Fuck the bloody euro!” he snorts. There’s decades of this to come, pal.