The James Bulger film: ‘It challenges my own opinion. So you know it’s the truth’

Detainment is the short film by director Vincent Lambe based on interview transcripts and records from the James Bulger case which shocked the world in 1993. 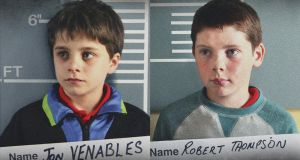 “I never imagined that being the most-hated man in Britain would be so time-consuming,” Vincent Lambe sighs. “I have emails piling up that I can’t get through. It’s definitely busy and stressful.”

The Dubliner’s crime was to make a short film focusing on the murder of James Bulger. Detainment is largely taken up with dramatisation – drawn directly from the transcripts – of the police interviews with the two Merseyside boys convicted of the toddler’s killing in 1993. Robert Thompson and Jon Venables, 10 at the time of the offence, became the youngest convicted murderers in modern British history.

Lambe, a graduate of Dún Laoghaire Institute of Art, Design and Technology, did not expect this degree of attention when he emptied his own bank account to finance the film. The 30-minute docudrama played well at festivals. It landed on the Oscar shortlist. On January 22nd Detainment was nominated for the best live-action short, and an already simmering controversy boiled over. Denise Fergus, Jamie Bulger’s mother, wrote to Lambe asking that he withdraw the film from the Oscars. There was an outcry in the tabloids. Social media fuelled the outrage.

People are outraged. A lot of it is based on misinformation. You read that it re-enacts the torture of James Bulger. They think it’s a very different film

“I am getting the gist of it,” he says. “They are coming into my email. I am reading stuff that’s come through the film’s website. Some of it is pretty bad. People are outraged. A lot of it is based on misinformation. A lot of what is said is untrue. You read that it re-enacts the torture of James Bulger. That is why they are outraged. They think it’s a very different film.”

At the time of our conversation, 227,000 people had signed a petition asking for the film to be withdrawn.

“I’d say none of the people signing that petition, aside from some of the Bulger family, have actually seen it,” he says.

Much of the debate has focused on the news that Lambe did not inform the family before making the film. But he is right to point out that – as is invariably the case with such controversies – few complaining about the content have seen the film in question.

Detainment does not deal in sensation. The main body of the film cuts between the two interview rooms – one grubbier than the other – where police try to draw truth from the accused. Ely Solan plays Venables as a panicked, confused child, still grappling with the appalling consequences of his actions. Leon Hughes makes something colder and more devious of Thompson. It would be a shame if, in all the commotion, the actors’ achievements were obscured. Solan is particularly impressive. Venables’s eerily convincing terror cannot help but trigger troubling conflictions. We are conditioned to have pity for a scared child, but our repulsion at his actions works against that sympathy.

It is worth again pondering society’s inability to balance these sorts of warring instincts. At one stage, Thompson wonders if the authorities took James to hospital because they wanted to “try and make him alive again”. Ever since the conviction there have been arguments about the decision to try the boys as adults.

The re-enactments of James’s abduction from The Strand Shopping Centre do not play so successfully. Again there is nothing particularly violent here – as Lambe notes, we do not see anything of the killing – but the move away from written records towards the re-imagining of a child’s last moments feels intrusive.

“I was mindful not to show anything graphic,” Lambe says. “One of the things Denise Fergus has criticised is that James is shown as a character. But if we didn’t it would be like we hadn’t acknowledged he was a victim. There was an innocent victim of a heartbreaking tragedy and I think it’s important to acknowledge that.”

Those sections also remind us of the 38 people who encountered the three children as they made their way to the train tracks where James was killed.

“They were called the ‘Liverpool 38’ at the time,” he says. “They were slammed, dragged through the media. But they just thought they were two brothers who couldn’t handle their younger brother or relative.”

So what about his decision to not contact the Bulger family when preparing the film? Lambe can never have imagined he would eventually find himself preparing for an Oscar nominees’ lunch with the likes of Glenn Close and Spike Lee. But news about even a low-key film would surely have got back to Fergus. The family cannot be expected to view such a project with dispassion.

It all came out of my bank account. Everyone told me I was crazy. It just kept getting more and more expensive. I hadn’t been directing for a while and I just wanted to get back to it

“I never meant any disrespect by not consulting with the family,” Lambe says. “I have enormous sympathy for the family. I always will. But there is more than one perspective on the case. I did think long and hard about the right way to make this film. I wanted to make a film that was entirely factual – but, just as important, impartial. So we decided not to talk to any of the families.”

Lambe says he worried that any consultation would lead to efforts to alter his approach.

Lambe, who is in his late 30s, has toiled in many aspects of the film business since graduation. He produced live television. He directed a few corporate videos. He spent time working in casting and set up an agency for actors. Inevitably, much of the online criticism has suggested that he is exploiting the Bulger tragedy for personal gain. The film was, in fact, entirely self-financed.

“It all came out of my bank account,” he says. “Everyone told me I was crazy. It just kept getting more and more expensive. I hadn’t been directing for a while and I just wanted to get back to it.”

Detainment is not an easy watch. Many will feel that its very existence is an affront. But the director’s seriousness of intent is unmistakable. RTÉ are set to show the film soon and it will be available to download on iTunes.

“The film is not me trying to express my view,” he says. “The film challenges my own opinion. That’s how you know it’s the truth.”