Gillian Anderson: Be wary, playing Thatcher is a poisoned chalice

There’s a double standard to objections about the casting. But dangers do loom 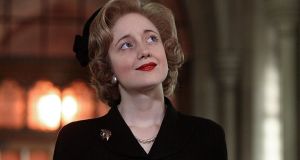 Nobody has moral qualms about Gillian Anderson playing Margaret Thatcher. Fans of stuff are stupid, but they are rarely that stupid. At least two articles have, nonetheless, engaged with imagined backlash at the news that the Anglo-American actor is to take on the role of the Lincolnshire Milk Thief in the fourth series of The Crown. “You can still like Gillian Anderson, even if she makes a great Thatcher,” the Guardian tells us. Everyone knows that.

Aside from anything else, the rumour mill tells us that Queen Elizabeth and her eighth prime minister didn’t much get on. It seems likely that The Crown will take the side of Her Majesty – now played by Oscar nominee Olivia Colman – over a woman who could have taught sandpaper a thing or two about abrasion. Maybe it won’t. Maybe it will depict Lady Thatcher (as she then wasn’t) as a melodic combination of Florence Nightingale and Beatrix Potter. You can still like Gillian Anderson. I still like Tim Roth and he once played a sympathetic version of Sepp Blatter. People get this.

One does, nonetheless, detect a hint of unease among our friends across the Irish Sea. For a generation that grew up with The X Files, Anderson, who played the sceptical Dana Scully in that series, provided the substance for a first sexual crush. Only Counsellor Troi from Star Trek: The Next Generation is regarded with so much erotic longing in the geek community. “I think I felt more comfortable with that than with men in suits thinking about me in that way,” she told me a few years ago. “There was something kind of cool and safe about the kids. Not seven-year-olds, you understand. I mean perfectly healthy, smart young teenagers.”

There were certainly people who found Mrs Thatcher attractive. Denis Thatcher for one (I assume). The thirsty Alan Clark, a junior minister in her government, talks lasciviously about her “dainty” ankles in his famously indiscreet diaries. But for most, that fearsome manner – something between a Valkyrie and a wind-rattled tree – rendered any consideration of sexual allure redundant. Even Clark stopped short of admitting unqualified desire. “I didn’t want to jump on her,” he said. “She is not there to be liked. She’s a force of nature.”

One can understand why Generation X-Files feels uncomfortable about an early crush playing their parents’ much-abhorred nanny. There is a double standard at work. Nobody would be making icky faces if some male equivalent – let’s say Brad Pitt – were playing Ronald Reagan, but a mass of male observers still find it hard to consider female politicians without factoring in their sexual appeal (or supposed lack of it).

Anderson should be fine. She’s a good actor and the scripts for The Queen have been strong. But dangers do loom. Over the past 50 or 60 years, too many men have fallen into the least-demanding discipline open to actors of even modestly fleshy composition. I speak of Churchill Acting. You know how this goes. Some Robert Hardy, Brian Cox or – again, in The Crown – John Lithgow makes spluttering noises while washing buckets of veal down the throat with vats of brandy. Gary Oldman isn’t even fat, but he still felt able to so some Oscar-friendly gurgling in the barely adequate Darkest Hour.

There are many fewer depictions of Margaret Thatcher on screen than there are of Winston Churchill. And the writers tend to come from different directions. The movie and TV Churchill, still habitually portrayed as flawed hero, is a gift to fulminating correspondents who enjoy pretending they’re the first person to notice he had an ugly, racist history as a defender of empire.

Depictions of Thatcher have been less affectionate. Many objected to the soft-pedalling in Phyllida Lloyd’s abysmal The Iron Lady, but few could argue that Meryl Streep made any attempt to render the PM warm. Andrea Riseborough (best actress of her generation?) investigated the sexism that hindered Thatcher in the superior TV movie The Long Walk to Finchley, but even that less antagonistic portrayal had much fun with the character’s hostility to irony. Lindsay Duncan was borderline-deranged in the BBC’s Margaret. Patricia Hodge was forbidding in The Churchill Play.

Of that distinguished list, only Riseborough – playing Thatcher long before she was famous – has managed to make a personality of the character. Like filmed depictions of Churchill, the on-screen Thatchers are too caught up with the superficial mannerisms that impressionists and cartoonists exploit. The odd, rising cadence. The uncomfortable social presence. The helmet of lacquered hair. It has proved impossible to get past the decorations of the public figure. Who knows? If Olivia Colman knew what Queen Anne sounded like, she might have had the same problem with The Favourite.

Anderson is as well equipped as any to overcome those challenges. But Thatcher Acting really is the new Churchill Acting. It’s a poisoned chalice. Like being leader of the Conservative Party.

Edinburgh festivals called off because of coronavirus pandemic

‘After Blackadder, for the first time in my life it was dead easy to get in the door’
7 Unveiling the enigma of Chirico
8