Gillette ad: If you can annoy Piers Morgan you are guaranteed free publicity

Donald Clarke: Morgan floats above the melee on waves of manufactured indignation 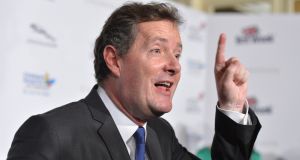 As people now only read the first paragraph, let us begin by recalling Piers Morgan’s hilarious interview, broadcast last summer, with evictees from Love Island. We wouldn’t want you to forget it.  Keen to brandish his learning before supposedly balsa-brained young people, he wondered if any could list “Pythagoras’s theorem to five decimal places”.

When a guest shrugged off this question that has no answer, Susanna Reid, Morgan’s long-suffering co-host on Good Morning Britain, invited her confrere to list the numbers.

The moment resonates with connoisseurs of schadenfreude. Pause the video and anticipate the aromas of crushed gooseberries and wafted elderflower set to pass across your palate.

You won’t need to be told that Pythagoras’s Theorem doesn’t have a value. That’s because it’s a theorem. It’s Pythagoras’s theorem. Morgan was thinking of Pi – the ratio of a circle’s circumference to its diameter – and he got even that wrong. Correct to four significant places, it is 3.142.

When somebody corrected him, Morgan crumpled into an embarrassed ball that might have generated a little pity if he hadn’t got himself into this position by attempting to reveal his guests’ ignorance.

I mention this because it looks as if Morgan has become the most influential man in contemporary advertising. That guy. The fellow who made a dork of himself before Love Island evictees.

Never mind the man on the Clapham (or Clontarf) omnibus. If you can get Morgan annoyed then you guarantee yourself hectares of free publicity. We are only halfway through January and the former editor of the News of the World has already helped two companies towards faux online infamy and real op-ed prominence. It’s hard to tell who’s being played anymore. How much of this outrage is intended? How much is useful? Should I be writing this? Should you be reading this? All is chaos.

The latest kerfuffle relates to a new commercial for Gillette razors. In the past, the company has shown chaps driving fast cars, punching the air after successful phone calls and embracing attractive ladies in airports. You remember. “Gillette! The best a man can get!” Scrape the filth from your face with our product and you too can be James Garner circa 1967.

The current advertisement takes a different approach. Beginning with shots of shavers staring guiltily at their mirrors, it makes explicit reference to the #metoo movement and “toxic masculinity” as it moves on to address bullying, sexual harassment and cask-strength mansplaining. “We can’t laugh it off,” a voice intones. It ends by telling us: “we are taking action at thebestmencanbe.org”. Get it?

There are reasons to raise a cynical eyebrow at this. Abused women didn’t establish the #metoo campaign to help Procter & Gamble, Gillette’s corporate overseers, flog more eight-bladed razors to the easily distracted. A 2016 report from Amnesty International implicated Wilmar International, which supplied raw materials to Procter & Gamble, in profiting from child labour. Now the company is a force for social justice?

But let’s be fair. Unlike the justifiably ridiculed 2017 Pepsi commercial that obliquely referenced the Black Lives Matter protests, the Gillette spot does deliver a clear, unambiguous message. The grimmer manifestations of masculinity – bullying, discrimination, sexual abuse – have been tolerated for too long. Nobody could object to that. Right?

It never does to underestimate the sensitivity of the fat-headed babies who keep their cauliflower ears ever alert for feminist attacks on the fragile male citadel. Within minutes there seemed to be calls for worldwide boycotts and waves of adverse social-media commentary. The word “seemed” is important here. It takes only a few such whinges – and a few hundred bot-driven comments on YouTube – to generate columns such as the one you are now reading. The vast majority of Gillette’s customers gave not a hoot.

Something similar happened just a week or so earlier when Greggs, the British baking chain, slyly announced they were launching a vegan sausage roll. A few easily triggered carnivores complained on Twitter. Many, many more complained about complaints they hadn’t actually read (keep up here).

Morgan was at the front line of the resistance against both advertisements. “Isn’t it time you changed your name to something more gender-fluid and less toxically masculine?” he yelled satirically at Greggs. By describing the Gillette commercial as an “ugly, vindictive two-minute homage to everything that’s bad about men and masculinity” he did little to diminish the gender’s reputation for ugliness and vindictiveness.

All these interested bodies knit together in a nexus of mutually beneficial disruption. Gillette sees its name move from the commercials to the editorial pages. Greggs gains more visibility than it has had in its 67 years of baking. The delicate men’s rights’ snowflakes get to vent a little bit more public spleen. And Morgan floats above the melee on waves of manufactured indignation.

What a world. Well, we’ll always have Pythagoras’s Theorem.