The English have been getting stuff wrong about Ireland again 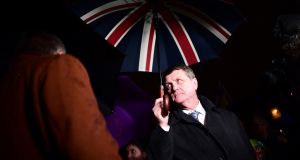 The English have been getting stuff wrong about Ireland again. Earlier this week, Gerard Batten, an MEP for Ukip, made an effort to downplay the kerfuffle surrounding the British border in Ireland (thanks to the comic Andrew Maxwell for that usage). “Here’s a fact about the Irish border,” Batten posted on Twitter before typing words that defy all sane definitions of the first noun in his sentence. “There are approx 100 lorries per day crossing the RoI & NI border. One company accounts for 50% of these trips – that company is Guinness.”

I don’t claim to be an expert on road haulage, but Seamus Leheny from the Freight Transport Association does meet that description. On The Nolan Show recently, he reckoned that around 13,000 lorries crossed the Border daily. It’s possible that Leheny was out by a factor of 130-1, but that would be akin to a football pundit predicting that Chelsea would beat Huddersfield 260-0 this weekend. There are about 200 road crossings. Using Batten’s figures, that comes out at half a lorry a day, but obviously some crossings will be significantly busier than others. As many as three trucks a day (phew!) could be passing through Newry. Do you know what? I’m betting the number is closer to 13,000 than 100.

Anyway, the post was taken down following a barrage of ridicule. At time of writing, we are unsure if Batten still argues that only 50 lorries carrying stuff other than booze cross the Border each day. We would relish the opportunity to hear what he believes (or believed) is in those vehicles. Shillelaghs, potatoes and gelignite, I’m betting.

The English have been getting stuff wrong about Ireland for ever. About 30 years ago, some pontificating loudmouth at an adjacent table disrupted enjoyment of my curry in a King’s Cross restaurant. You will recall the scene in Annie Hall that sees Alvy refuting a nearby idiot’s opinions on Marshall McLuhan by producing the great man himself. This wasn’t much like that. “All this fuss about the ‘nationalists’ in Northern Ireland?” my irritant boomed to a rapt audience. “Do you how many Catholics there are there? Around 10 per cent. That’s all.”

Let’s be frank. If the idiot had been bigger and I’d had fewer pints of ale, I would have bowed my head and finished my jalfrezi without objecting. I spoke up. Despite being little more imposing in appearance then than now, I managed to cow him into silence by bellowing the rough figures across an otherwise deserted restaurant. I doubt my argument was persuasive, but who’s going to bother contradicting a lone Northern Irish drunk in the Star of India after closing time?

The point is this really has been going on since Cnut the Great misidentified Saoirse of Carlow as British. After soaking up British popular culture from birth, we know a very great deal about how their country works. They tend to know less about us. But this hitherto forgivable ignorance has escalated to intolerable levels as Brexit Fever fries the brains of British (specifically English) legislators and journalists.

Nothing better illustrates the lack of awareness – and lack of genuine interest – than the continuing Brexiteer perception that the Taoiseach is taking a “hard line” to pacify an awkward squad in the republican wings. As long ago as November 2017, a story in the Sun argued that: “The Irish PM has only been forced to adopt the stand under heavy political pressure from Gerry Adams’s Sinn Féin.” Simon Coveney somehow managed to resist including a “rolls eyes” gif when issuing a denial.

There are complexities here, but the core of Varadkar’s supposedly stubborn demand is that the British honour the Belfast Agreement and leave the Border as it now is. His belligerent, awkward, extreme stand is shared by all mainstream parties and by a significant majority of the Irish people. The version of the Taoiseach created by right-wing English blowhards – a combination of Gamal Abdel Nasser and Smaug the dragon – does him no harm with the home audience. By adopting a policy no more controversial domestically than an opposition to the reintroduction of rabies, this undemonstrative politician comes across as a Hammer of the English for the new millennium. He’s not really that.

We should not get carried away. There is nothing special about the English. There is nothing special about the Irish. We only notice such errors because they concern our own everyday realities. Every article in every Irish newspaper about, say, the Dominican Republic will provoke sighs from inhabitants of that Mediterranean nation (ha ha!). Commentary on coin collecting will invariably contain mistakes to give numismatists indigestion. These Brexit howlers serve to confirm how much misinformation we unknowingly read in the media every day.

Still, the British could do better. They’re right over there, for Pete’s sake.