A lot of us end up as I did wanting a relative to die, but are absolutely unable to kill them 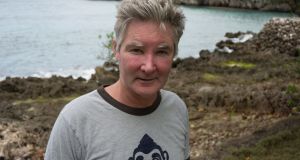 Guy Kennaway: “Just as we have a midwife to bring us into this world, so we need an expert to help us out of it”

When my mum, Susie Kennaway, announced to me that she was planning to kill herself, and needed my help, I little thought that I would end up writing about our secret and illegal activity in The Irish Times, let alone create a whole book on the subject, called Time to Go. Luckily, the publication of this memoir, and the attention it has brought my mum and the cause she believes in, has rejuvenated her, and pushed her plan to say goodbye to this earth very much onto the back burner. In fact she is fast becoming the unlikely poster girl, at 89, of the assisted dying lobby, and has a schedule of media appearances that would make an X Factor contestant blanch.

It was on a winter’s day in 2017 that Susie announced to me that with a long and rich life behind her she didn’t want to slip into dementia or end up sitting in a wing-back armchair staring into space in the day room of a care home. A woman who was used to running things to her satisfaction, she now wanted to take charge of her death, and needed me to help.

It started with her asking me to get hold of some heroin for her, but from there the two of us worked our way through many other options. This was a woman who went to Cheltenham Ladies College, and whose drug of choice up to then had been prosecco. I had always thought Susie would go on forever; I was Prince Charles to her queen, though I somehow doubted the heir to the throne was scoring smack for her majesty. Heroin was eventually ruled out on the grounds that Susie was allergic to morphine, a fact that I would have thought recommended it, but she turned out to be very picky about how she was going to bow out of life. I spent one afternoon chauffeuring her around the local countryside looking for a good cliff to drive over. I said I didn’t mind her using that method, but she couldn’t use my car. We discovered that all the best drops were well protected by safety barriers. “Health and safety, it will be death of me,” she sighed. “Au contraire,” said I.

I had up to then been sceptical about the project, and was actually humouring my mum, because it gave us a hobby we could do together in her old age. The truth was that I had had a fairly fractious relationship with the woman up to then, and the activity of helping her sign off had brought us together. But I didn’t take her seriously until something happened about six months into the project, in the spring on 2018.

This was my that stepfather, a brilliantly flawed and inappropriate gentleman called Stanley, who had been married to my mum for over 30 years, fell very ill. Basically, his natural time was up; he was 90 years old, skeletal, confused and in pain.

But the main problem with Stanley was that he couldn’t die. It was my impression that he wanted to die. On one of the final collapses, he had resolutely refused to let the ambulance to take him to hospital. He wanted to stay at home and fade away. But as hard as he tried to die, and we willed him to die and escape the torture, the visiting doctor and nurses worked night and day to prevent it happening. It was bonkers. He had a DNR and palliative care only orders, but he was still being injected with antibiotics on the day he finally passed, weeks later.

I spent a long time staring at the medical paraphernalia: the drips, the bags, the dressings the unguents, ointments, pills and syringes. And I asked myself, as I ask you now: whose needs were being met in that room? Not Stanley’s, and not his family’s or his wife’s, who all adored him and who didn’t want the torture to go on a minute longer than it had to.

I can tell you whose needs were being met: the pharmaceutical companies’. The people who were selling all that over-packaged stuff. Goodness knows how much profit they made out of torturing Stanley for another 24 hours.

After doing some research, I calculated that as a rule of thumb, and on average, about half of our life’s total medical costs are incurred in the last two weeks of our existence. It is an appalling waste of money for a truly horrible 14 days. That money should go on sick children, and on people still young, who have a future. Not keeping me hanging on for 72 gruesome hours when I am 93.

After Stanley’s death, I was more sympathetic to my mum’s plan. Instead of saying to her that it was a silly idea, against nature and God, I started listening to her arguments, and came to the conclusion that in a time before modern medicine, assisted dying may have been the wrong route to take out of life, but in the world we live in today, it is fast becoming a necessity.

All this time I had quietly been writing a comic account of events in my mother’s household. Because it was so irreverent, my plan with Susie and the book was twofold: plan A was to show it to her when she was dead, and plan B was to hope that she slid into dementia and couldn’t read it. No chance of that; unfortunately for me her mind was still razor sharp. When she discovered I had been merrily writing down all her plans and pronouncements she was at first mortified, and then generous, because she could see that Time to Go could bring attention to the way people are forced to die in Britain, and I am certain also in Ireland and America.

What I have learnt talking to people, and hearing about their experiences of sitting beside a deathbed, is that a lot of us end up as I did wanting their relative to die, but are absolutely unable to kill them. For make no mistake, assisted dying is killing by another name. We should not shy away from that. And the doctors, in my opinion should not be asked to do this. I think their perfectly reasonable resistance to the idea of killing patients they have worked so hard to keep alive is absolutely fair. It is not doctors’ work. We need a new professional.

Just as we have a midwife to bring us into this world, so we need an expert to help us out of it. This end of life midwife must be a trained professional who takes into account all the relevant circumstances of the patients, and who can then administer the calming hemlock at the time and place they want it. This new profession is a combination of priest, pharmacist, magistrate and carer. It is certainly not a job for the doctor. The doctor should be allowed to attend to other patients.

In the future, when you look in newspapers and see the Births, Deaths and Forthcoming Marriages, you will see a new category: Forthcoming Deaths. I personally will set my own death date, if I have not already fallen foul of the reaper by then. I shall bring my kids and grandchildren together, and explain to them that just as you have to know when to leave a job, a relationship or a party, so you have to know when to leave life itself. Those wise words were written by the surgeon and writer Henry Marsh.

I am glad to say that by telling my mother’s story I have helped break the taboo that surrounds talking about about the last few days of life. I have also given my mum a new lease of life. And I call that a result.
Time To Go by Guy Kennaway is published by Mensch Publishing , also available as an ebook and audiobook read by Alex Jennings and Patience Tomlinson