The 10 most romantic films on Netflix for Valentine’s Day

We’ve done the digging, the weeping, the retching. Here’s something for almost everyone

The official trailer for 'God's Own Country' starring Josh O'Connor and Alec Secareanu. 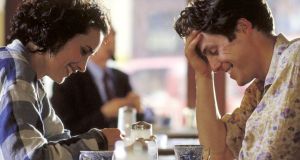 Allow us to sound like a broken record. If you desire a classic weepie – more or less anything from before 1980 – then you must look somewhere other than Netflix. Google Play is the best option for the online browser seeking old movies. But there are romantic delights available for the discerning viewer on the most popular service. We’ve done the digging required and found something for almost everyone.

FOR THE URBAN CYNIC

Woody Allen’s breakthrough as a critically respected director has its moments of high romance - that poignantly remembered lobster dinner, for one - but, for the most part, the film takes a flintily realistic view of the romantic process. “A relationship, I think, is like a shark. It has to constantly move forward or it dies,” Alvy says. In the title character, Diane Keaton created a fashion icon for the ages.

FOR THE COCK-EYED OPTIMIST

Another great New York romance. Cher plays the mousy grey-haired accountant (because that’s how you first think of Cher) who seems to have given up on love. Nicolas Cage (before his vest became habitually stained with the blood of slain terrorists) is the one-handed baker who seems to have given up on life altogether. “Snap out of it!” she shouts. After 100 minutes or so, they realise where their salvation lies. If these people can find love…

Richard Curtis now divides both audiences and critics. For everyone that admires About Time, there’s somebody who hates Love, Actually. You would, however, require a heart of anthracite to resist the film that helped define a newly buoyant mood in fin de siècle Britain. Hugh Grant in top form? WH Auden? That famously sweary beginning? Four Weddings created a genre that - for good or ill - has never quite gone away: the millennial posh-com.

FOR THE DANGEROUSLY PASSIONATE

Abdellatif Kechiche’s Palme d’Or winner – among the most admired films to hold the title this decade – became notorious for the explicitness of its lesbian sex scenes, but those sequences were to a purpose. They help convey the relentless, but ever-changing, passion that drives the relationship between Léa Seydoux, a surly artist, and Adèle Exarchopoulos, a younger teacher, over several years. The two leads are the only people to have been awarded Palmes d’Or for acting. Deserved.

FOR THE OLD FASHIONED

Those of us who argued that Dunkirk was not the best recent film based around that conflict were not being entirely facetious. Lone Scherfig’s lovely, sorely underrated film goes among a film crew shooting a patriotic movie entitled The Nancy Starling during the second World War. Bill Nighy has never been better as the aging romantic lead. The historical detail is immaculate. But it’s the beautifully judged relationship between Gemma Arterton and Sam Claflin that makes the film so special.

FOR THE ICILY ROMANTIC

There’s no doubt that Cate Blanchett and Rooney Mara sell the romance in Todd Haynes’s adored adaptation of a much-censored Patricia Highsmith novel, but the film retains the icy distance that characterises a large portion of that director’s work. Setting so much of the film in a New York winter does nothing to raise the temperature. Carol nonetheless offers a moving portrait of two woman caught in maelstroms of intolerance and misunderstanding. Visually strong. Excellent 1950s detail.

Trust us. If you’ve seen each of the succeeding 197 Nicholas Sparks adaptations and hated every single one you still need to give the original Nick-flick a look. You may, however, make out little through the curtain of your own tears. Ryan Gosling and Rachel McAdams play the besotted couple in 1940s North Carolina (where else in a Sparks joint?) who age into James Garner and Gena Rowlands. The film made stars of the two young leads, generated a cult and - arriving later this year - inspired a Broadway musical. It’s a cracker.

FOR THE LOVER WHO DOESN’T MIND A BIT OF MUD

Francis Lee’s acclaimed British film concerns the relationship between a young sheep farmer (Josh O’Connor) and a Romanian migrant worker (Alec Secareanu) in an inhospitable - though beautiful - part of Yorkshire. We are not being prim when we say it has one of the dirtiest sex scenes in contemporary cinema. You’d be dirty too if you were at it up a damp, muddy hillside. But it’s the longing and the emotional connection that really stays with you. O’Connor was rewarded with the role of Prince Charles in the next series of The Crown.

The disapproval directed against the Twilight series by people who haven’t seen a single episode is depressing. It is worth reminding oneself that - despite the queasy “true love waits” undercurrents - Catherine Hardwicke’s funky, organically directed first film fully earned its enormous success. If for nothing else, Hardwick deserves a Hollywood star for the inspired casting of Kristen Stewart and Robert Pattinson. Both have remained among the most desired stars on the planet.

FOR THE OLD-SCHOOL HOLLYWOOD FAN

If Netflix won’t show us any Gloria Grahame films - and they won’t -- then let us settle for Paul McGuigan’s touching study of that star’s relationship with a young man in England during her declining years. Annette Bening captures the spirit of Grahame without slipping into impersonation. Jamie Bell is convincing as the young Liverpudlian who allows her some deserved happiness. The picture also reminds us that Hollywood used to be even less forgiving of its middle-aged stars than it is now.

FOR THE LONG-TERM MOURNER

David Lowery’s brilliant, peculiar, original art film could just as easily have been called A Love Story. Rooney Mara plays a young woman coping indifferently with the sudden death of her boyfriend. She grieves. She rages. Eventually, she moves on. Only we know that the dead man - Casey Affleck in a sheet - is watching her every move as the years and decades pass. It’s a small film that somehow manages to touch on the entire history of the United States from beginnings to some time in the future. There’s something you don’t see every day.