We have learned little from the 2014 Garth Brooks fiasco

Outdoor licences are as precarious as ever, and we still pay for a promise that can be broken 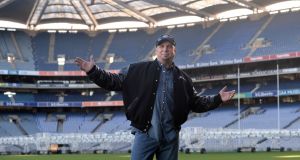 Everybody knows what Marx said about history repeating itself: first as tragedy, second as farce. But some rare events manage to unfurl as both simultaneously. One such case was the national palaver that erupted five years ago when Garth Brooks almost came to town.

You may remember it. The story of how the country-music supernova came to announce a string of five concerts in Croke Park, eventually finding permission to perform just three, and ultimately cancelling them all, has already been the subject of countless news reports and phone-in shows. There was a rapid-reaction 2014 documentary on RTÉ, called Garth Brooks: Tomorrow Never Came, and a 2015 stage comedy, by Fiona Looney, called Are You There Garth? It’s Me, Margaret.

You could be forgiven for thinking that the story had been sufficiently well told already; that both the subject, and the licence, have been exhausted.

Raking over the ashes, Scannal, Garth Brooks – Subject to Licence (RTÉ One, Tuesday, 7pm), has little to add to the hullabaloo apart from language, even then finding little in translation.

Rumbles of discontent among residents grow louder, having already suffered through three One Direction concerts in the stadium, noting that the venue’s annual allocation special events has been used up. Who was doing the maths?

“Sometimes a small thing can balloon into a huge issue,” considers Máire Treasa Ní Cheallaigh. Although you could argue that, in this case, the reverse is true. A series of enormous events, announced with fanfare and frenzy, came down to the small matter of working within regulations.

After the schadenfreude of the Fyre Festival fiasco, Garth Brooks’s no-show may no longer seem like a hill of beans, but even today few of the contributors can contemplate it without a rush of anger, a shiver of mortification, or, more frequently, both.

Embarrassment, understandably, becomes the dominant recollection. “It was embarrassing to hear him talk about it in front of the world’s press,” says journalist Bernie Ní Fhlatharta, “that we couldn’t do the job properly and we had let him down.”

More compelling than any debate between Dublin City Council and the GAA, politicians and promoters, residents and fans, is that rather poignant concern that we were making a show of ourselves in front of the world, and – worse still – in front of Garth. (Only Fiona Looney, in the final line of the show, has the temerity to lay any blame at Brooks feet.)

In the end, little was learned from the affair: outdoor concert licences are still as precarious as they ever were, and all such ticket buyers pay for a promise that can be broken.

Still, the Garth Brooks non-event has somehow grown in the public imagination in a way that no appearance could live up to. Like the radically discounted €1 Garth Brooks T-shirt that one otherwise disappointed fan came home with, the documentary itself adds to a stack of concert memorabilia for the shows that never were.