Has your phone secretly recorded your conversations? Mine has

But the recordings aren’t used to serve you ads. The industry has better ways of doing that 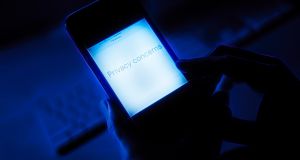 ‘Every single one of us can be profiled based on what they’re reading, watching, listening to.’ Photograph: Thomas Winz via Getty

Is your phone eavesdropping on your private conversations in order to send you targeted ads?

No matter how many times the tech companies deny it – and they have all denied it, from Google to Apple to Facebook’s Mark Zuckerberg, in testimony to the US Congress – the question refuses to go away.

It may be because advertising sometimes seems a bit too coincidental. Everyone has a story: the chat in the pub about camping, after which they started seeing ads for tents. In my case it was a particular brand of vacuum cleaner, which I tried to persuade my husband we really needed. He promptly started being spammed with ads for that vacuum cleaner.

“Some apps have been caught doing similar things in the past, but in general the idea that a phone is listening in the background to pick out keywords in order to target ads to you based on that is very unlikely. It would use a lot of battery life, it would require a lot of data,” and any abuse of permissions is something that other app developers would pick up on, says TJ McIntyre, a lecturer in Law at the UCD Sutherland School of Law, and an expert in data privacy.

We feel like we’re being spied on, but some of it might just be coincidence, he says. Our phones are with us all the time, and during the average day, we have a lot of conversations, and inevitably some will appear to be reflected in the advertising we see.

But then he adds: “The question of whether our phones are spying on us for advertising purposes is well settled in the sense that they are, to a very large extent. The only difference is that most likely it’s not being done by using the microphone.

“It’s entirely possible you’re leaking data in another way that’s causing you to be targeted. It might be based on other websites you’ve visited. It might be somebody else in the household, accessing the internet from the same IP address searches for that term, and therefore ads end up being targeted at anybody coming from that IP address.”

My husband hadn’t looked the vacuum cleaner up, but I had, from our home IP address. “That’s equally creepy,” McIntyre says. “Even if it’s not actually using the microphone to do it, it’s creating inferences not just about you, but about the other people in your life, from your search history.”

This is what Alan Smeaton, a professor of computing at Dublin City University, calls “the hidden footprint”. We worry about advertising, he says, when we can’t find any rational explanation for an ad that pops up. “When you can’t explain, you start to see dark things. You start to feel like you’re being spied on.”

But that’s the price many people seem willing to pay, he adds. “If I was being smart, I’d say, ‘Get over it, this is the deal we’ve signed up for’. The cleverness of the algorithms is to take a huge amount of soil and rocks and mine out the gold flecks of information.”

So tech companies probably aren’t covertly recording our private conversations – although if they wanted to, they have the capability.

Smeaton points out that some sleep-tracking apps already “listen to your breathing as you sleep to help to determine the quality of your sleep. So that’s more creepy than the idea of phones listening to conversations.”

“Creepy”, I’ve noticed, is a word even experts use a lot in this discussion. “I think we get freaked out by the terminology,” says Martyn Farrows, the chief operating officer with Soapbox Labs, a Dublin-based company that builds speech-recognition systems for children.

“These devices will have a mic; yes, it will be open if it’s a smart system, because it’s listening out for a ‘wake’ word.” (Wake words, depending on the device, might include “Alexa” or “Hey Siri” or “Ok Google”.)

The real question mark, he says, “arises when there is accidental triggering of the wake word, or if the device records when it shouldn’t have been recording”.

To see if I have ever been a victim of this “accidental triggering”, I do a search under the My Activity tab in Google, a terrifyingly comprehensive repository of information about my life, movements, activity, habits, preferences, purchases. (myactivity.google.com). Since I long ago deactivated voice controls, I am not expecting to find anything under the “voice and audio”. But there are a handful of audio recordings saved.

Among the snippets is a lot of meaningless nonsense, and a few seconds of the Morning Ireland sig tune. But there’s also, disturbingly, a clip of a former colleague speaking during a private meeting in 2015, when neither of us knew she was being recorded.

There are also clips of my children using my phone to search for things like Lego Batman and Wikipedia, or just chattering in the background. What’s not at all clear is what Google does with these recordings or why it needs to save them – especially the ones involving children.

Farrows points out that there are particular ethical implications to the recording and storing of the voices of the under-12s, a by-product of systems such as Amazon’s Alexa. “There are lots of grey areas like that which are just not being addressed, because the technology is moving so much more quickly than the regulation is able to keep up with.”

Where children are concerned, Farrows’s company supports a privacy-by-design policy for the under-12s. Microprofiling of children should be “a complete no-go”, he says.

Dr Johnny Ryan of Brave, a private web browser, believes we may be worrying about the wrong thing. He says we have bigger data problems than the prospect of our phones secretly listening to us.

This week, the Data Protection Commissioner announced an investigation into Google on foot of a complaint made by Ryan. The complaint alleged “a massive and ongoing data breach in which Google’s DoubleClick/Authorized Buyers leaks intimate data about the people visiting … websites to thousands of companies every day,” including personal data about visitors’ locations and inferred religious, sexual, political characteristics.

“Every single one of us can be profiled based on what [we’re] reading, watching, listening to. That’s a problem for democracy. I don’t think it’s necessary for phones to be listening to us, because they’re getting everything they need anyway.”