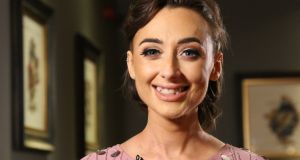 Laura Brennan: This Is Me, on the RTÉ Player from Friday

Laura Brennan: This Is Me
Friday, RTÉ Player, from 9am
This new one-off documentary on the RTÉ Player follows the final chapters in the life of Laura Brennan, who was living her life to the full with end stage cervical cancer. After a heroic battle, Laura passed away this past March 20th. But before she died, Laura was determined that every parent in Ireland who had to make a decision on whether their daughter would be vaccinated against HPV would hear her story first. Her cancer, like 5 per cent of all cancers, is caused by the HPV, human papillomavirus. The vaccination rate in Ireland had fallen to 51 per cent, thanks to a lot of ill-founded negative publicity around the vaccine. Laura worked tirelessly as an advocate for the HPV vaccine. The most recent figures showl that the uptake of the vaccine has risen to 70 per cent.

The Late Late Show
Friday, RTÉ One, 9.35pm
If you’ve been watching the Sunday night series Ireland’s Favourite Folk Song, you won’t want to miss tonight’s Late Late, as Ryan Tubridy announces which tune has triumphed in the public vote.

Cuban-American songwriter Gloria Estefan is also an accomplished businesswoman and quite rightly regarded as a music legend. She joins Norton to chat about her life and times as well as her musical On Your Feet, soon to open in London’s West End. Plus: David Tennant and Michael Sheen discuss their roles in the upcoming TV adaptation of Terry Pratchett’s Good Omens. And the Jonas Brothers perform their current single, Sucker.

In AD 79, an eruption of Mount Vesuvius, a volcano near the Bay of Naples in Italy, buried the ancient Roman city of Pompeii under a thick carpet of volcanic ash. The dust “poured across the land” like a flood, one witness wrote, and shrouded the city in “a darkness . . . like the black of closed and unlighted rooms”. Some 2,000 died, and the city was abandoned for almost as many years. These days, Pompeii provides a window into the lives of the Romans and is a source of outstanding information on the art, customs, trades and everyday life of their civilisation. Here, investigators, historians and geologists hunt for evidence hidden beneath the surface to assess the risk of a new and potentially devastating event of equal magnitude.

Holst: The Planets with Professor Brian Cox
Saturday, BBC2, 9pm
He’s currently presenting his new series, but if you’d like Brian Cox to give you a more condensed run-down of the solar system, interspersed with one of the best-loved pieces of 20th-century classical music, then this is definitely the show for you. Filmed at the London Barbican last year, it sees the BBC Symphony Orchestra perform Gustav Holst’s The Planets to mark the centenary of its premiere. Before each movement, Cox will discuss what modern science reveals about each of the planets. But given his own musical background (he was famously once a member of the group D:Ream), will he also be tempted to join in on keyboards?

The British Soap Awards 2019: Live
Saturday, UTV, 8pm (also Wednesday, Virgin One, 9pm)
After the year they’ve had, Britain’s soap stars deserve a chance to put on their glad rags and give themselves a slap on the back. Between them, the casts of EastEnders, Coronation Street, Emmerdale, Doctors and Hollyoaks have dealt with knife crime, cancer, abuse and car crashes. Now, they are about to find out which plots and performances made the biggest impact as Phillip Schofield hosts live from Salford’s Lowry Theatre. That’s not much of a trek for the Corrie contingent, but will it be one of their rivals that ends up going home with the most coveted award, Best British Soap?

Britain’s Got Talent Live Final
Sunday, Virgin One/UTV, 7.30pm
It’s been another weird and wacky year in BGT land. As usual, judges Simon Cowell, David Walliams, Amanda Holden and Alesha Dixon, along with hosts Ant and Dec, have all had their own magical Golden Buzzer with the power to send acts straight through to the semi-finals. Wallams used his on Flakefleet Children’s Choir in the first episode, while Dixon hit her Golden Buzzer for 10-year-old singing sensation Giorga Borg. Cowell decided to send comedian Kojo Anim through, and boy band Chapter 13 blew away Holden with their Stevie Wonder medley. Finally, Mumbai dancer Akshat Singh also received a Golden Buzzer from Ant and Dec after pumping up the crowd with his energetic routine. But are any of these five acts still in with a chance of succeeding Lost Voice Guy and becoming champion?

The Raft: Storyville
Sunday, BBC4, 9pm
In the summer of 1973, five men and six women embarked on a 101-day scientific sea adventure, setting off on a small raft named Acali across the Atlantic. In the experiment, initiated by Mexican anthropologist Santiago Genoves, the group set out to explore the origins of violence and the dynamics of sexual attraction. The 11 crew members were handpicked from around the world with the aim of mixing religion, gender and nationality to maximise friction on board. This documentary uses archive materials and interview the surviving members about the unexpected outcomes.

Guy Martin’s D-Day Landing
Sunday, Channel 4, 8pm
The Normandy landings on June 6th, 1944, represented the largest amphibious invasion in history. But six hours before troops hit the beaches, thousands of troops covertly parachuted behind enemy lines to clear the way and limit the German counter-attack. Here, mechanic, motorcycle racer and TV presenter Guy Martin puts himself in the place of one of those rarely spoken-about troops, first leading a team of experts to restore an original Douglas C-47 Dakota cargo plane, before flying to Normandy and making the big jump out of the plane.

Was the work of a Cork genius deliberately obscured by a famous expert?
Real news has value SUBSCRIBE