A clip of speaker of the US House of Representatives, Nancy Pelosi, has gone viral after it was edited to slow Pelosi's speech down, thus giving the impression that she was slurring her words. Video: C-Span/Facebook 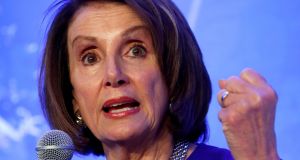 “Good Lord lady … How many drinks did you have today,” goes one of the most upvoted of the 29,000 comments under a Facebook video of the US house speaker Nancy Pelosi apparently slurring her words.

Underneath, someone else calls her an “alcoholic old hag,” garnering nearly 2,000 likes.

“Omg is she drunk or having a stroke???” goes another pithy take, which earned 2,400 likes.

The answer is none of the above: Pelosi was the victim of a crude and less than ingenious hoax. A far-right US group took a clip of her speaking at a press conference, and slowed it down by 25 per cent, so that she appeared to slur her words, making her look drunk, or otherwise incapacitated.

The video has been shared over 2.4 million times.

This isn’t the emergence of “deepfake” technology we have been hearing about – a process involving human image synthesis, using artificial intelligence or AI, to create entirely fake videos. It’s nowhere near that clever.

Any 10-year-old with access to iMovie could have pulled it off, and most people with the critical reasoning of the average 10-year-old would also have been able to figure out that it was fake – though apparently not Rudy Giuliani, who shared it on his social media.

The US President Donald Trump resisted that particular video, but he did share a different Pelosi mash-up designed to make her look inarticulate. He tweeted it with the characteristically incisive one-liner, and no visible sense of irony whatsoever, “PELOSI STAMMERS THROUGH NEWS CONFERENCE”.

The major media outlets in the US quickly picked up on the hoax, posting the doctored video and the real thing side by side and doing their best to debunk the story, which immediately ran wild, as it was designed do.

Google’s YouTube took the clip down. But Facebook and Twitter chose not to remove it, though Facebook did later demote it, and promote some “fact check” links to appear alongside it, including a pop-up warning about “additional information” when anyone tried to share it.

“We think it’s important for people to make their own informed choice for what to believe,” said Facebook’s product policy and counterterrorism executive, Monika Bickert on CNN, as though “truth” and “facts” are merely two more options on the menu. “Our job is to make sure we are getting them accurate information.”

Unlike other recent incidents in which bad actors have abused social media platforms (the livestreaming of the Christchurch mosque attack being the most appalling recent example), Facebook didn’t see the Pelosi video as an example of egregious abuse. This wasn’t a case of hijacking of the platform by people with malicious intent. No rules were broken.

Sure, the platform may not actually have been designed to host doctored Nancy Pelosi videos. It was conceived in a world where no-one – or none of the engineers responsible for building it – foresaw the downsides to turning everyone on the planet into a potential publisher with a global audience of millions, beyond maybe forcing us to put up with a bit of spam, and too many kitten videos.

Oh, for the days when we worried about spam. Since then, we have seen, sometimes all too graphically, the downsides of allowing people to vomit out whatever bile they wish, unhindered by concerns about ethics or reputation.

We know about the child abuse videos, the beheadings, the hate speech, the footage of murder, animal torture, rape and terrorism that is posted to the platform hourly. We’ve heard from the moderators whose job it is to retrospectively figure out which, if any, of Facebook’s rules this content might breach.

Mere lies and hoaxes, however widely disseminated, don’t appear to be a priority for the platform, which hides behind excuses about “censorship” and “allowing people to make their own informed choices about what to believe”.

By continuing to host the video, Facebook did exactly what it was designed to do: bringing communities of like-minded people together to share entertaining content and forge connections with one another.

That the content was entirely fake seems neither here nor there, in this brave new world where engagement and eyeballs are the only currencies that count. Hoaxes aren’t a glitch: they are part of the design.

“We aren’t in the news business. We’re in the social-media business,” Bickert continued on CNN, an argument that must be getting harder to deliver with a straight face every time someone from the tech giant has to come out with it.

Because, of course, as long as Facebook is “just a platform” and “just in the social-media business”, it can’t be held accountable for verifying the content it publishes – although that doesn’t stop it profiting from it. In the last quarter, Facebook, made $16.6 billion from advertising.

Who are the winners here? Facebook, which – for now at least – is still profiting from all of those lovely eyeballs, even as it becomes a progressively uglier place to be. Trump and his supporters, who gleefully picked up the manufactured narrative questioning Pelosi’s health and stability.

Not Pelosi, of course.

Not the traditional media, which are still gamely clinging on to old-fashioned values like truth and fairness, and struggling for survival as advertising revenues continue to be gobbled up by social-media giants.

Not the public at large, whose attention is being hijacked with misinformation, and whose behaviour and voting intentions are being manipulated in front of our eyes.

Not our increasingly fractured and polarised society.