What’s occurring? Gavin & Stacey’s back. Here are the catchphrases to brush up on 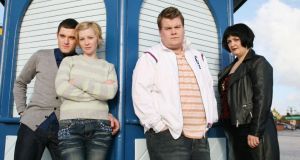 Gavin & Stacey, the hit BBC sitcom starring Mathew Horne and Joanna Page, is returning for a Christmas special, according to its creator and star James Corden, who tweeted the news last night.

The comedy, which aired over three series, from 2007 to 2010, followed Gavin, from Essex, and Stacey, from Barry, in south Wales, who fell in love and married after speaking on the phone to each other every day at work.

Nine years on from its last special, on New Year’s Day in 2010, will the show’s characters still use their catchphrases? Here are some of the best-known ones from the TV show.

Ruth Jones, who created Gavin & Stacey with Corden, brought this phrase to millions in her role as Stacey’s best friend, Nessa. Some fans have repeated the phrase to her in odd places. “Someone once said it to me at a funeral,” Jones told the Daily Star Sunday. “And my answer was, ‘Er, I think we are at a funeral. Sometimes it’s just not appropriate.’”

Ruth Jones and I have been keeping this secret for a while... We’re excited to share it with you. See you on Christmas Day ⁦@BBCOne⁩ #GavinandStacey pic.twitter.com/gTRa3cp90t

Even David Cameron, the former British prime minister, reportedly used another of Nessa’s catchphrases, saying: “I’ve been to Barry” – in south Wales, where the show is set – “three times and want to go back... From now on, whenever we have an election success in Wales, I’m going to congratulate my Welsh MPs on a ‘tidy’ result.”

Often used by Stacey, Page’s character. But the actor resisted the urge to use the word when embracing the news of the sitcom’s return, tweeting: “I’m so excited! It’s happening! Can’t wait to get on the slots down Barry again!!”

After the 2010 finale was watched by more than 10.2 million viewers in the UK, Corden became the host of The Late Late Show, the CBS programme best known for its Carpool Karaoke segment. – PA