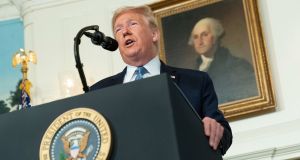 US president Donald Trump makes a statement at the White House in Washington, on August 5th in response to two separate shooting incidents. Photograph: Chris Kleponis/EPA

Less than a month after celebrating Independence Day on July 4th, America once again reeled this week from a bloody spate of mass shootings over a single weekend which claimed the lives of over 30 people and injured countless others.

US president Donald Trump responded by trotting out a similar statement to the one released in the wake of the Parkland mass shooting in February 2018. Reading robotically from a teleprompter, he condemned “gruesome and violent video games” for contributing to the “glorification of violence in our society,” while calling for prayers for the wrong Ohio city. Pointing out Trump’s politically motivated need to obfuscate, equivocate and recklessly covfefe his way past gun control measures is at this stage redundant, but this dangerous rhetoric does have traction because we are not ready to let go of the dangerous myth that so-called “violent” media has harmful effects.

The word “violent” is ideologically loaded and weighed down with implications relating to morality and harm. It casts a long shadow over those who engage with it and is used indiscriminately by those who wish to control and police media consumption for society’s apparent benefit.

Responding to the president’s comments, the Entertainment Software Association (ESA), which rates video game content and bills itself as the “voice and advocate for the video game industry,” issued a response, stating that: “More than 165 million Americans enjoy video games, and billions of people play video games worldwide.” It said “other societies, where video games are played as avidly, do not contend with the tragic levels of violence that occur in the US.”

Lack of proof aside, a narrative of harm persists within the media


Though researchers have toiled on the subject for many years, none has categorically found that playing video games has harmful effects. Indeed, the absence of conclusive evidence was remarked upon by conservative Supreme Court justice Antonin Scalia in 2011 when California attempted to criminalise the sale of violent video games to minors.

Securing first amendment protection for video games as an art form, Scalia offered a compelling argument for the dismissal of pro-negative effects research, stating that: “They do not prove that violent video games cause minors to act aggressively (which would at least be a beginning). Instead, “nearly all of the research is based on correlation, not evidence of causation, and most of the studies suffer from significant, admitted flaws in methodology.”

Lack of proof aside, a narrative of harm persists within the media, with headlines based on distorted and decontextualised scientific data which is fed to the public as “facts” extrapolated from deterministic and ideological assumptions. In spite of this, or perhaps because of the ambiguity, the myth that video games cause people to commit violent acts is as ubiquitous as ever. Although fears pertaining to the internet, pornography and social media sites have the potential to surpass the concern expressed over video games within the next decade, for now, the narratives of harm surrounding video games does not seem to be subsiding.


There is nothing new about this narrative, indeed it is to be expected in the wake of these events. The theory that children identify with fictional representations has a long historical precedent. As early as the 18th century, critics described Gothic literature as something akin to a “virus” capable of “impressing young imaginations with gross improbabilities, unnatural horrors, and mysterious nonsense.” Upon publication of her supernatural novel Zofloya; or, The Moor in 1802, Charlotte Dacre was condemned for contributing to a “mode of impression which fills the mind of the juvenile reader with horrid ideas of supernatural agency.” Two centuries later, nothing has changed. Media which is branded as violent still occupies a strange position in society as being both popular and marginal because of its alleged negative effects.

Just as an interest in horror comics in the 1950s or video nasties in the 1980s was interpreted as a pathological indication of something strange or sinister, in the late 20th and 21st century, a similar interest in playing video games has similarly been defined as pathological in the wake of criminal behaviour. This rhetoric is dangerous. It reinforces a false narrative of harm concerning media effects while further placing gaming and engagement with similar activity on the margins of society, leading to further division and ostracisation. As a result, video games acquire a harmful status as unsafe products. Given enough political support, anti-video game lobbyists could see them removed from supermarket shelves for fear of normalising violence as young American mothers with kids in tow stroll past displays offering discounts on beans, toilet paper, bullets, detergent, Ruger 10/22 Takedown assault rifles and milk.

In seeking solutions to mass shootings, Trump states: “It is too easy today for troubled youth to surround themselves with a culture that celebrates violence.” The subtle nuances of irony are indeed lost upon ears deafened by Trump’s controversial Fourth of July “Salute to America,” essentially a military recruitment drive, punctuated by the roar of aircraft flying over tanks adorned in red, white and blue. Yet apparently its games that contribute to the glorification of violence, not guns.