Euphoria: Brimming with dysfunction and self-harm 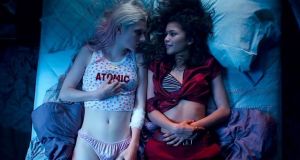 As unswervingly grim as it is ineffably stylised, Euphoria (Sky Atlantic, Tuesday, 10pm), is a young person’s idea of the lives of much younger people aimed squarely at an older audience.

At one point in its first episode, Rue (the compelling Zendaya) says as much, when the aptly named protagonist and narrator pauses during her litany of issues (including drug addiction and recovery from a recent overdose), to explain the etiquette of dick picks and slut pages for the uninitiated. “I’m sorry,” she deadpans, “I know your generation relied on flowers and your fathers’ permission. But it’s 2019. So, unless you’re Amish, nudes are the currency of love.”

Like those nudes, whose dissemination proves wider than intended, Euphoria also presents itself as the naked truth of post-millennial America, perhaps lovingly, but lands far beyond that demographic.

In the US, the show airs on HBO, the home of sophisticated drama and acres of flesh, which makes its graphic depictions of sex, violence and drug abuse among high schoolers seem more gawping than generous.

Its 30-year-old creator and writer, Sam Levinson, has spoken about “creating empathy for this generation among an older generation”. If so, does the programme’s unwavering and unshockable gaze intend to sympathise, sensationalise, or scandalise? Who, in other words, is Euphoria for?

Born three days after 9/11, pushed into the world, she tells us, “by the cruel cervix of my mother”, Rue seems like both a fresh depiction of adolescence and a time-honoured evocation: an 18-year-old with the precocious, jaded wordliness of Billie Eilish, and the vocabulary of a try-hard Holden Caulfield.

“The world’s coming to an end and I haven’t even graduated high school yet,” she drawls to one associate en route to her even younger, pre-teen dealer, like someone with a head start in nihilism.

From this distance, that might be an accurate reflection of growing up in the anxious US, where atrocities and obscenities come so thick and fast that numbness – either affected or medicated – seems like a reasonable response.

Told, ahead of a party, to act “like your pussy cost a million dollars”, Rue’s witty friend Kat retorts, “I’d settle for four Corona Lights and some non-rapey affection.”

In an episode brimming with dysfunction and self-harm (most strikingly in the shape of new arrival Jules (Hunter Vaughn)), peers divide mostly between dehumanising bros and desensitised girls. Everyone seems old, or perhaps just cynical, before their time.

And yet the show also grants them an impossible glamour of shimmering, multi-hued imagery, where claustrophobic close-ups, corridors that twist in sympathy with a hallucinogenic trip, or even a house party of distinctly rapey affection all seem as cool as a music video.

That might seem like an effort to festishise the secret activities of teens for the eager alarm of adults, or a sop to the kids whose romantically awful reality it serves up to their elders. Either way, the artful bleakness of Euphoria isn’t likely to make anyone too happy.

Caught by the fuzz pedal: Gaz Coombes on his top Supergrass songs
8