Netflix: The 10 best new shows and series to watch in August 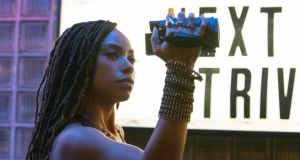 From Friday, August 2nd
The third season of Justin Simien’s polemical comedy-drama sees Sam White (Logan Browning) surrender the hot seat of her controversial college-radio show and beginning to think about life outside the campus. After the cliffhanger of the second season has been cleared up, the series shows the characters in a more contemplative mood, with intentions to broaden their horizons. Studious Lionel (DeRon Horton) throws himself into Winchester’s gay scene; Troy (Brandon P Bell), no longer content with coasting, tries to figure out his place in the ultrawhite team of the college magazine; and Joelle (Ashlee Blaine Featherson) is reconsidering her relationship with Reggie as a charismatic lecturer, Moses (Blair Underwood), enters the scene. Simien’s caustic humour and ability to skewer pop culture thankfully remain intact: Dear White People is as sharp, fearless and vital as ever.

From Friday, August 2nd
Written and directed by the Sex and the City screenwriter Cindy Chupack, Otherhood is a glossy look at what happens when a trio of mothers, played by Angela Bassett, Patricia Arquette and Felicity Huffman, decide to reinsert themselves into the lives of their grown-up children. Tired of being treated as an afterthought, the empty-nesters venture into New York, attempting to reconnect with their sons while cementing their own friendships.The film is essentially an excuse to see the glorious Bassett ham it up alongside Arquette and Huffman in a series of shopping montages and drunken nightclub scenes.

From Friday, August 9th
Those Gorgeous Ladies of Wrestling are back – and with the arrival of Geena Davis’s entertainment director, the hard-as-shellac-nails Sandy Devereaux St Clair, the girls have got their work cut out as the frenemies Ruth (Alison Brie) and Debbie (Betty Gilpin) promote their Las Vegas show. This move to the city lets the writers expose the underbelly of the show-business world, as the women strive to keep themselves afloat and audiences interested. This more solemn season may lack some of its predecessors’ punch, but with its compelling characters and zesty humour, Glow isn’t out for the count just yet.

From Friday, August 9th
An intriguing documentary exploring the influence on Washington, DC, of a secretive Christian conservative group known as the Family. Produced by the Oscar winner Alex Gibney, the five-part series explains how the group have infiltrated American politics, their inner workings and their insidious effect on everything from the presidency to foreign affairs.

From Tuesday, August 13th
Curated by comedy’s most charismatic queen, They Ready is a showcase for young comedians. It’s a platform for comedians from diverse backgrounds, including LGBT+ performers, women and people of colour, whom Tiffany Haddish believes are not given the same opportunities or respect as their white male counterparts.

From Friday, August 16th
After the nuts-and-bolts narrative of season one, mostly focusing on the arduous work of Holden Ford and Bill Tench’s in establishing the FBI’s criminal-profiling programme, the second season of David Fincher’s serial-killer drama becomes more involved with the crimes themselves. This season looks at the Atlanta child murders of the 1970s, committed by Wayne Williams, as well as continuing the interwoven story of Dennis Rader, the BTK murderer, who eluded police for 30 years. Charles Manson also features, with Damon Herriman (who plays a young Manson in Quentin Tarantino’s new film, Once Upon a Time... in Hollywood) playing the charismatic cult leader dining out on his new-found notoriety.

From Friday, August 16th
Based on her New York Times column, Diagnosis follows Dr Lisa Sanders as she crowdsources diagnoses for mysterious and rare illnesses. The documentary sees struggling parents and disillusioned patients finding answers and solace through the internet as Sanders tries to find people affected by similar disorders and figure out treatments.

From Tuesday, August 20th
In his first Netflix special, Simon Amstell’s anxious comedy touches on subjects such as coming out to his father, his need for validation, his neuroses and the complex world of modern relationships. His vulnerable, humane but always incisive take on life is the perfect antidote to the bluster and bravado so often associated with British comedy.

The Dark Crystal: Age of Resistance

From Friday, August 30th
A prequel to Jim Henson’s melancholy fantasy epic, this 10-episode series follows three Gelflings, who inspire a rebellion against the cruel emperor, the leader of the Skeksis, as they discover a secret that threatens their world of Thra. Netflix is hoping that this revival will be as visceral and unforgettable as the original, haunting children’s nightmares for decades to come. Its celebrity-packed voice cast includes Taron Egerton, Helena Bonham Carter, Caitriona Balfe and Alicia Vikander.

From Friday, August 30th
Netflix’s latest docu-reality show follows stylist to the stars Jason Bolden and his interior-designer husband, Adair Curtis, as they run their lifestyle company, JSN Studios, and navigate married life. With Bolden earning a reputation as one of the most powerful stylists in Hollywood, having clothed everyone from Serena Williams to Ava DuVernay, the show goes behind the velvet drapes to portray the glamorous life of catering to the A-listers.

Tiger King: You wait years for just one animal-collecting weirdo, then half a dozen arrive at once
10