I Am Kirsty: A great British kitchen-sink drama 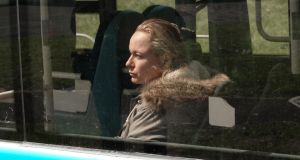 I Am Kirsty: Samantha Morton gives a brave and unshowy turn

In the Time Before Love Island, the UK excelled at social-realist television that communicated the horrors of breadline poverty without ever quite wallowing in them. That golden era of the great British kitchen-sink drama is evoked in gut-punch fashion in the second of Dominic Savage’s Channel 4 collaborations with a notable actress.

Last week, in I Am Nicola, it was Vicky McClure as a woman trapped in an emotionally abusive relationship. I Am Kirsty, starring Samantha Morton, is, if anything, even more excruciating as it tracks a struggling single mother’s descent into sex work.

But it’s riveting too, thanks to Morton’s brave and unshowy turn. It would be absurd to claim the story has a happy ending, yet you can’t help cheer Kirsty as she confronts Ryan (Paul Kaye), a sociopathic sicko, and pays him back the money with which he thought he could manipulate her.

Still, how slippery the slope proves. When a gambling-addict boyfriend ditches Kirsty and her two daughters, taking with him the television and living-room table, her world is tipped upside down. Enter the creepily concerned school-gate dad Ryan, who cajoles her into accepting a loan of £500.

Suddenly she can put food on the table and buy a new TV. The inevitable twist comes as her benefactor calls around to demand his cash back. Kaye, a former comedian, is best known today for playing Thoros of Myr on Game of Thrones. He is chilling as Ryan, who at one point suggests Kirsty clear her debts by becoming his glorified sex slave.

This is harrowing, and Morton and Savage, who worked together on the script, don’t spare us. It’s heartbreaking seeing Kirsty struggling to maintain a front for her kids, and wrenching when she finally follows the advice of her friend at the hotel where she is employed as a cleaner and goes into sex work.

She does so out of desperation to get Ryan off her back and out of a desire to provide for her children. That a mother could find herself at such a pass is horrible to countenance. Yet Morton and Savage address a difficult subject with dignity and honesty, so that in the end I Am Kirsty achieves its own kind of grace.