Weekend TV guide: 8 of the best shows to watch

John Creedon searches for the places behind the names, plus the dragons are back in their den with a new fire breather and WWII by the (horrendous) numbers 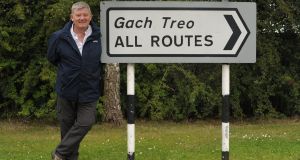 Creedon’s Atlas of Ireland, Sunday on RTÉ One

Walter Presents’ latest offering is a haunting Italian drama (originally called Non Uccidere), set in Turin, about a determined homicide detective with a talent for solving the challenging puzzles behind crimes motivated by jealousy, vendettas and repressed anger. In tonight’s opener, the body of 15-year-old girl is found in a flooded basement. Her father hears the news while at a TV studio where he has gone to make an appeal regarding her disappearance. Inspector Valeria Ferro (Miriam Leone) immediately grabs the reins of the investigation.

Egypt’s Great Pyramid Uncovered
Saturday, Channel 4, 8pm
Saturday night has become ancient Egypt night on British telly. Last weekthere was Egypt’s Greatest Treasures on Channel 5; tonight Channel 4 is repeating Secrets of Egypt’s Valley of the Kings, followed by this new documentary, which looks at the Great Pyramid of Giza. The six-million-tonne construction was clearly built to last – it’s the last surviving wonder of the ancient world. But how did the Egyptians manage to engineer it so precisely, and who did the labouring? Incredibly, sources include a team leader’s log book that was recently found by French archaeologists.

WW2: The True Cost of War
Saturday, Channel 5, 8pm
The statistics behind the second World War are so staggering, it can be hard to get your head around them. Here’s a few for starters: it cost more than a trillion dollars, 690 million people served in it, and between 50 and 70 million soldiers and more than 30 million civilians died in it. This new series suggests that the numbers can be used to help us understand the war’s causes and some of the key strategic decisions made by the Nazis and the Allies. The first episode begins with the story of Franz Honiok, the 43-year-old farmer who is generally considered the first victim of the war. It also explores how no one was ready for the global conflict that would ensue when Germany invaded Poland.

Creedon’s Atlas of Ireland
Sunday, RTÉ One, 6.30pm
What’s your favourite Irish placename? Is it Termonfeckin or Hackballscross, or maybe Cloontyprocklis or Muckanaghederdauhaulia? John Creedon has always been fascinated by Irish placenames and their origins, so for his new series he sets off around Ireland to learn the meanings behind the placenames we all take for granted: “Placenames have been a source of fascination for me since childhood. I mean, NewTwoPotHouse is only out the road . . . how could you pass that without wondering about the story behind it?” Creedon’s curiosity about Irish placenames led him to studying folklore in UCC, but in this three-part series he goes out in the field to visit the towns and villages, and uncover their hidden histories through the people who grew up in them. The first episode takes him to Derry, where he hangs out with members of The Undertones, and to Cavan, where his local guide is writer and Irish Time columnist Michael Harding.

Sara Davies, founder of Crafter’s Companion, is a new addition to the panel on the business ideas contest, joining returning dragons Peter Jones, Deborah Meaden, Touker Suleyman and Tej Lalvani in putting more would-be entrepreneurs’ ideas to the test. Making their pitches this week is the creator of a brand of spiced rum, who gives the studio an exciting new look. There is also a couple who have brought their four-legged friend with them to demonstrate a range of pet food, and the inventor of a special toilet gadget. Evan Davis presents.

BBC Proms: Mozart’s Requiem
Sunday, BBC4, 7pm
Love and loss, life and death collide in an emotionally charged concert as Nathalie Stutzmann conducts the BBC National Orchestra and Chorus of Wales at the Royal Albert Hall. Turbulent shifts of mood characterise Brahms’s Tragic Overture, and their ripples continue through the Prelude and Liebestod from Wagner’s powerful operatic exploration of forbidden love, Tristan and Isolde. At the heart of the programme is Mozart’s Requiem, the composer’s final work, left unfinished at his early death, and his own musical epitaph. Soloists include Fatma Said and Kathryn Rudge.

Getting impatient waiting for the new season of Netflix’s The Crown? You can get your fix of royal history from this new documentary series. Using personal letters, diaries and photograph albums, it charts the story of the royal family during the turbulent period between the 1920s and the end of the second World War. The first episode begins shortly after the first World War, when society is changing fast; monarchies have been toppled throughout Europe and most working men and many women have the vote. To keep pace with this new democratic age, George V uses his children to woo the public. But while Mary and Bertie are towing the line, brothers Edward, Henry and George are enjoying the roaring 1920s.