The Model Squad: Portrait of a business built on insecurity 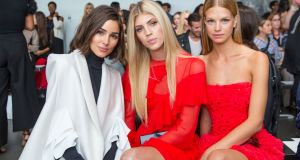 Model Squad: a bit of a humourless slog as the identikit nature of the girls becomes wearing

Now that every Tom, Dick and Jenner with an Instagram account is trying their hands at modelling, it’s easy to understand why E! is centring its new docu-series, Model Squad, on the lithe young things of the industry. The show follows a selection of the busiest women in the fashion world as they swirl through the superficial churn of non-stop events and endless photo-shoots while trying to survive the brutality of castings and rejections with their sanity and self-worth still intact.

This is not the campy fun of America’s Next Top Model – there are no smizing lessons or Booty Tooch poses. Unlike the effervescent Tyra Banks and her old-school supermodel sisters, these girls barely have time to cultivate a personality in between regular gym sessions and worrying about their social media following. Which makes Model Squad a bit of a humourless slog as the identikit nature of the girls becomes wearing. There is no punkish attitude to be found, unlike with their British or European counterparts, who at least attempt to rinse some enjoyment out of their ludicrous situation of being plucked from the local fast food chain into the world of haute couture and who generally survive on cigarettes and the dry ice of nightclubs. These all-American girls are busy taking vitamins, following fad diets and drowning themselves in designer water.

The modelling business feasts on the young. As with athletes, these women are keenly aware of their limited shelf life. In a bluntly revealing interview, high-fashion darling Ping Hue wistfully contemplates how her birthdays are now always seasoned with a slight sadness due to the looming spectre of turning 30 and being thrust off the conveyor belt of desirability.This anxiety and accelerated pace sees the models clutching at opportunities to springboard out of the restrictive life of being a beautiful commodity where they have no agency and are easily replaceable. They speak of their desires to break into acting, presenting, designing – anything with some more permanence and without constant scrutiny.

As they are ushered into rooms where they are measured and weighed, observed and commented on as if they are not present, they are judged on everything from their skin tone and collar bones to their walk (a bouncy step is dismissed for the sin of being “too ’70s”) the women amount to being nothing more than sleek sartorial greyhounds in the blood sport of fashion.

Which is why it’s strange that influencer Olivia Culpo who is a designer and an owner of a restaurant is so eager to get onto the runway. She and Victoria Secret “angel” Devon Windsor represent the two sides of the modern modelling business. For Culpo it is another way to increase her lifestyle “brand” and something to use as leverage in her career as a “personality”, whereas for Windsor it is a job that pays exorbitant money but is ultimately unfulfilling.

Being an E! show, these insightful exchanges are balanced with a palatable, fluffy blandness that comes in the form of a selection of ‘how to’ segments, YouTube-style tutorials where the girls give their tips on what to pack, what to wear to the airport and how to make a face mask. There is also a sense that as the show is produced by modelling-agency giant IMG that the harsh unairbrushed truth is being concealed. Model Squad may not be a gritty documentary but even under its glossy sheen the dark roots of the reality of the beauty business still manage to poke through.

Indecisiveness led to home of The O’Rahilly being demolished
9