HBO and Netflix tied for the total number of Emmys won, with 23 awards each 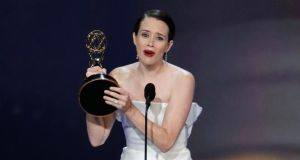 Emmys 2018: Claire Foy of The Crown wins the award for outstanding lead actress in a drama series. Photograph: Mario Anzuoni/Reuters

These are the major winners of the 70th annual Primetime Emmy Awards. Additional winners are listed at emmys.com.

Writing for a drama series Joel Fields and Joe Weisberg, The Americans (Start)

Directing for a drama series Stephen Daldry, The Crown (Paterfamilias)

Directing for a limited series Ryan Murphy, The Assassination of Gianni Versace: American Crime Story (The Man Who Would Be Vogue)

Directing for a variety special Glenn Weiss, The Oscars (ABC)

*Guest actor, drama Ron Cephas Jones, This Is Us

The true history of lying
6

Classic horror: the 10 most terrifying short stories ever written
9 Sound of the soul of African Peru
10