Katie Hopkins’s only talent: being tiresome and repellent 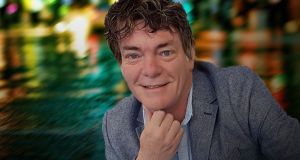 Niall Boylan: suggests opening a small prison on an offshore location such as Spike Island and harsh treatment there for those who have committed the most vile crimes.

Perhaps the most famous moment from the classic spoof music documentary This Is Spinal Tap features Christopher Guest’s slightly dim guitarist Nigel Tufnell boasting about the volume levels on his amplifier.

He explains that they go up to 11, for those moments when he needs to go “one louder”. When asked why he didn’t make the number 10 louder on the controls, he looks on blankly. “These go to 11,” he replies.

Tufnell’s flummoxed response comes to mind when listening to the Niall Boylan Show (4FM, weekdays). Boylan’s chief characteristic is his aptitude for creating on-air outrage, both on his afternoon phone-in show and its Hobbesian evening iteration Niall Boylan@Night (4FM, Monday-Thursday).

He invites callers to contribute on hot-button topics without much attention to nuance or indeed accuracy, egging them on or pulling them up depending on the required level of sturm und drang.

In short, his antennae are so attuned to fomenting argument that he is the last person who needs help stirring la merde. So when Boylan brings British columnist and right-wing controversialist Katie Hopkins onto Monday’s show to talk on race-related matters, it seems like a superfluous exercise in high-volume apoplexy, the shock jock version of turning it up to 11.

Hopkins, whose only discernible ‘talent’ is her ability to be tiresome and repellent at the same time, expands on her predictably race-baiting tweet that she doesn’t want black British actor Idris Elba to play James Bond. She wants a white actor in the role, complaining that while black actors now get historically white parts, that there would be a fuss if the reverse occurred.

“The left and the liberals lack creativity, so they have to nick ours,” she complains, inexplicably using the first person plural possessive.

Throughout this dispiriting conversation, Boylan seems to have a jolly old time. Though he mildly pushes back against some of his guest’s assertions – “I’m sure there’s black lads in MI5,” he says, by way of pleading Elba’s case – he lets Hopkins have her say as she jokes about being called a racist. Then, when Boylan dismisses Daniel Craig’s Bond films as “dark”, Hopkins shows off her ready wit: “They’re about to get a whole lot darker.”

Well, that’s the racism charge cleared up so.

Boylan, to be fair, trades in more than dog-whistles. His daytime show regularly covers pressing issues such as the homelessness and the housing crisis. But having Hopkins as a guest, even in less rabid guise, gives her hateful invective a sheen of acceptability.

Meanwhile, the presenter pitches himself as an honest broker, albeit of the “hard-but-fair” stripe. But his choice of topics can give rise to some alarming opinions, with Wednesday’s discussion on whether the death penalty should be reintroduced bringing forth some ripe ideas.

Emotions run understandably high as callers say they would happily give a lethal injection to killer and rapist Brian Hennessy, who murdered Sharon Whelan and her two young daughters on Christmas Eve 2008.

But such notions pale beside Boylan’s compromise solution for an alternative to the death penalty. He suggests opening a small prison on an offshore location such as Spike Island for those who have committed the most vile crimes.

This modest proposal is met with approval by Boylan’s callers, even those who oppose execution. Maybe it’s elitist, liberal handwringing to bemoan Boylan’s uncompromising tone and unabashedly outrageous approach. But then the spiel of US shock jocks seemed like outlandishly extremist fare until it ended up as White House policy. There’s no harm in suggesting the noise is turned down.

There’s tension over on Newstalk, where the fraught relationship between bikes and cars is presented as an irreconcilable tribal fissure akin to the Civil War. The topic has long been a reliable source of ready-made controversy on Newstalk, in the grumpy ruminations of Pat Kenny, Paul Williams and the station’s original velophobe, George Hook.

With the number of cyclists increasing, Yates describes the document as “populist”. He questions the feasibility of proposed segregated cycle paths, preferring to concentrate on whether the wearing of bicycle helmets should be compulsory. When Troy talks of bike lanes being blocked by lorries, Yates responds by pointing out the “flagrant breaches of the law” by cyclists who cycle on footpaths and “treat pedestrians as collateral damage”; an unfortunate phrase, given the number of cyclists actually killed by motorists.

It’s a depressing display of playing to the drivetime gallery from an informed presenter who should know better.

In this context, Tuesday’s discussion about cycling on Lunchtime Live (Newstalk, weekdays) between host Ciara Kelly and Dublin’s Lord Mayor Nial Ring is a model of rational debate. Kelly gently upbraids her guest for having parked in a cycle lane. The Mayor doesn’t dodge culpability, and reasonably suggests that all forms of transport should exist in peace, as it were: “There’s blame on both sides, I would suggest.”

But Ring chiefly focuses on the annoyances caused by bikes, such as clipped mirrors, adding that car drivers contribute more to the economy.

“You can’t come in and throw the 26-inch plaza [sic] TV into the little front basket on your bike,” he says, not at all patronisingly. It’s left to Kelly to bring the issue into sharp relief.

“The reality of it is, it’s an unequal relationship,” Kelly says. “Cyclists don’t kill motorists.”

Radio Moment of the Week: The baking of a Pope

With Pope Francis’s arrival imminent, Sean Moncrieff (Newstalk) has a report by Niamh Hassell from the Monastery of St Alphonsus in Dublin, where half a million communion breads for the forthcoming papal masses are being baked. It’s a large enterprise, involving the “fine art of cutting” and the perils of undercooking. Most fascinating is the information from Sister Mary Margaret about the two different sizes of communion wafers used by priests for mass, four- and six inches. Some priests like the larger size for visibility from the altar, but “they said the Holy Father would probably use the four-inch, the ordinary mass bread.” He may be Pope, but he doesn’t need the host with the most.