Nine of the best TV shows to watch this weekend

Celebrations of Irish sporting women and old school trad, plus Killing Eve now on the BBC 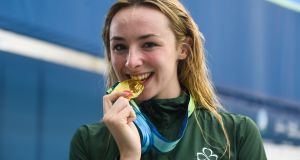 The Late Late Show
Friday, RTÉ One, 9.35pm
Issues crucial to people in their 20s and 30s emerging from a decade of austerity will be topic of a special panel hosted by Ryan Tubridy. Writer Stefanie Preissner, actor John Connors and footballer Philly McMahon discuss everything from the horror of the housing and rental markets to the uncertainty of the gig economy, the rise in anxiety and the affect of social media. In addition, actor and comedian Pat Shortt describes uncovering a suspected murderer in the family closet during his recent episode of Who Do You Think You Are?; and Ailbhe Griffith, the victim of a violent sexual assault 13 years ago, tells about seeking closure by meeting the man convicted of attacking her and playing herself in a docudrama about the encounter. Plus: staff and patients featured in the RTÉ documentary The Rotunda; Irish singer-songwriter RuthAnne; and music from The Irish Tenors.

Big Brother: Live Launch
Friday, Virgin Two, 9pm
Plenty of folks are wondering: has this long-running reality show finally gone off the boil? That remains to be seen, but just days after wrapping up the celebrity version, Emma Willis introduces the latest wave of ordinary folk about to enter the Orwellian pre-fab. Of course, there’s a good chance that some of these nobodies going in will emerge as household names by the time the latest series is over.

Front Row Late
Friday, BBC Two, 11.05pm
BBC Two’s nocturnal arts slot has gone through many incarnations over the years, from the sublime Late Review in the 1990s, when the likes of Mark Lawson and Tom Paulin used to assess films, books and plays, to this offering. Previous series have featured reports on the Turner Prize, Michael Fassbender and Blade Runner 2049. Following her stint as host earlier in the year, Mary Beard is back with the topical cultural debate programme. There will be more interviews, news features and performances from the world of the arts.

Oscar-nominated Stephen Rea tells D'Arcy about his co-starring role , an Irish revenge thriller set during the Famine; Rebecca Root, the first trans actor to play in trans role in Irish theatre, talks about her upcoming film roles in Colette opposite Keira Knightley and The Sisters Brother with Joaquin Phoenix; senator and social activist Lynn Ruane reveals the intimate details of her new book, an inspirational memoir about family, class and identity; and double act Marty Morrissey and Aine Lawler preview next week's National Ploughing Championships.

It’s already picked up plaudits in the US (including Emmy nominations for actress Sandra Oh and writer Phoebe Waller-Bridge), and those who have missed it on its unheralded RTÉ run can find out what the fuss is about. It stars Oh as Eve, a whip-smart MI5 security officer whose deskbound job has so far failed to live up to her fantasies of being a spy. Eve’s life is about to get a lot more exciting as she’s given task of protecting the only witness to the murder of a Russian politician – an assignment that puts her on collisions course with a beautiful, mercurial and dangerous assassin called Villanelle (Doctor Foster’s Jodie Comer).

In Declan McGrath documentary, which had its world premiere at the recent Galway Film Fleadh, Clannad’s Pól Brennan explores how American song collector Alan Lomax came to Ireland in 1951 on the first stop of a mission to save the folk music of the world. The trip resulted in the recording of some 25 artists and first ever LP of Irish traditional music – an album that sowed the seeds of the Irish traditional music revival in the 1970s. Lomax realised the music of the most marginalised people was as powerful as the highest form of art and, inspired by inventions of the 1940s, he devised a plan to save the music of the world.

Tate Liverpool was England’s first gallery of modern art when it opened in 1988, but its origins were mired in the politics of the Thatcher era. It was part of the Tory response to the Toxteth inner-city riots earlier in the decade and was not universally welcomed. Now, as it celebrates its 30th anniversary, comedian and writer Alexei Sayle, who was born in the city’s Anfield area, assesses its impact and meets up with Lord Heseltine, the politician who was made “Minister for Liverpool” to try to solve Merseyside’s economic and social problems in the 1980s.

To some, King Arthur was a character from English mythology and folklore who quested the Holy Grail and won many battles using his infamous sword, Excalibur. To others, he was a Romano-British leader who fought against the Anglo-Saxons in the late fifth to early sixth century. Through access to a major new excavation uncovering an array of artefacts at the dramatic medieval castle and coastline in Tintagel in Cornwall, Alice Roberts hopes to be in a position to separate fact from folklore and shed some light on the dark ages.

Tom Stoppard: A Life – A great biography of a great playwright
7