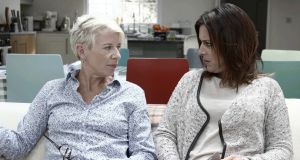 Lucy Kennedy with Katie Hopkins, whose self-obsession has the all-consuming gravity of a black hole

At the start of Living With Lucy (TV3, Tuesday, 10pm), presenter Lucy Kennedy can’t seem to locate the front door to the home of her latest host, “controversial English media personality” Katie Hopkins.

The moment is presented as a cute, defusing, bumbling intro to this pivotal encounter between loveable Irish Lucy and hateful English Katie. Lest anyone confuse these media personalities, Kennedy assures us early that despite their glancing similarities – both are married mothers of three, work in the media and are carbon-based lifeforms – she does not expect to find “too much common ground”. Hell, she can’t even find her way in!

The show’s gratingly palsy format is otherwise slow to bend just for the sake of Hopkins’ immense toxicity. Shy to provide a full resumé of Hopkins’s controversial opinions, the programme brushes against her pro-Brexit position, alludes briefly to her disdain for stay-at-home mothers, and concentrates on her undisguised contempt for overweight people.

It is left to the viewer to recall Hopkins’s recent tweet, following the Manchester bombing, calling for a “final solution” (which lost her a radio job).

Or her insistence that migrants crossing the Mediterranean should be met with gunboats, not rescue ships.

Or her contention that the widely published 2015 picture of the drowned Syrian three-year-old, Aylan Kurdi, was staged in order to solicit sympathy.

Or sundry defamations and damages.

Instead, Kennedy tells us, after three days together, “I’ll tell you exactly what she’s like.” Oh, please don’t keep us in suspense.

In conversation, her self-obsession has the all-consuming gravity of a black hole, swallowing every other concern; her entire sense of self derives from casually dispensing hatred and from righteously receiving it.

She needs the attention. However big, however small. Why else would you bring some tawdry Irish show into your home?

That one can say repugnant things while being outwardly polite is new to Kennedy. “Either there are two Katies,” she confides to her bedroom camera, “or I haven’t met the real one yet.”

Here’s an idea: Maybe there is no real Katie. Just some howling void where a conscience should be. A bleak manifestation of nihilism with a peroxide Hitler haircut who has learned to monetise hatred and marshal a significant Twitter following.

As an experiment, apparently, Kennedy has the always outrageous Hopkins tweet a picture of both media personalities together, “and see what people think of this”.

Kennedy reads one trenchant reaction: “She’s just an evil person and you’re giving her a platform.”

But the truth is that with that gesture Kennedy has also stepped onto Hopkins’s platform. This is really Living with Katie.

Lest Kennedy become seduced by the attention, she assures the camera, several times, that she will tell Katie her true opinion. Any moment now.

But, while Kennedy gets somewhere with Mark, Hopkins’s unguarded, concerned husband, an indifferent Hopkins runs rings around her.

Kennedy settles instead for indirect name-calling: “Someone like me would think, what an absolute bitch.” For what infinitesimally little it would achieve, you almost want to see someone like Lucy Kennedy do that.

Because hate, as they both know, is great for ratings. We get to consume Hopkins’s awful bile, return our own, and somehow not feel trolled by the whole thing.

Kennedy even illustrates the manoeuvre, literally turning a corner, and figuratively washing her hands of Hopkins.

“Don’t turn off your tellies,” she pleaded at the start of the show. At its end she instructs us: “Just don’t give her the oxygen.”

Perhaps they have even less in common than we thought. At least Hopkins is consistent.

Have you a moral duty to care for others?
9 Dundalk relights fire in former factory
10