‘Game of Thrones’ wins for best drama while ‘The Marvelous Mrs Maisel’ wins five awards, including best actress in a comedy series 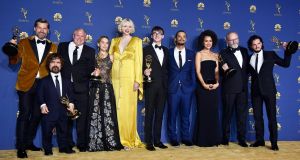 The dragons held off Netflix. Game of Thrones stormed the 70th Primetime Emmy Awards on Monday night, taking home the best drama Emmy for the third time in the last four years and defeating last year’s winner The Handmaid’s Tale. Although HBO’s sprawling fantasy closed out its seventh season 13 months ago, Emmy voters still showered it with awards. HBO and Netflix tied for the total number of Emmys won, with 23 awards each, including the statuettes given out Monday and at the Creative Emmy Awards on September 8th. Game of Thrones had the biggest haul overall, with nine awards, just ahead of Amazon’s The Marvelous Mrs Maisel and NBC’s enduring sketch series Saturday Night Live, which won eight apiece.

For Netflix, the 2018 Emmys represented a triumph. But the result came as a relief to HBO, which can now say it has technically finished in first place among all broadcast and cable networks for 17 years running. The rest of HBO’s awards were spread among several shows in acting categories, including wins for Henry Winkler (Barry), Bill Hader (Barry), Thandie Newton (Westworld) and Peter Dinklage (Game of Thrones).

In his acceptance speech, Dinklage called out the show’s creators, David Benioff and Dan Weiss, saying: “Thank you, Dave and Dan, for changing my life. I cannot walk down the street anymore.”

The Americans, the FX spy drama that concluded this year, won two awards, including one in the best actor in a drama category for Matthew Rhys. The drama had only won two Emmys across its previous five seasons, but voters decided to give it some love on its way out, as they had in the past with The Sopranos and Breaking Bad.

Claire Foy, who played Queen Elizabeth on The Crown, won for lead actress in a drama, her last chance to win for that role before ceding it to Olivia Colman as the show moves into the 1960s. Earlier this month, The Crown won best cast in a drama at the Creative Arts Emmys.

Netflix spent handsomely on Emmy campaigning this year, opening a space in Hollywood to showcase its fare and advertising on billboards along the Sunset Strip. But it wasn’t the only company to hype its wares. For Your Consideration events – panel discussions where voters have access to stars, canapes and booze – filled the schedules of the more than 23,000 members of the Television Academy in the run-up to the ceremony.

Last year, there were 61 academy-sanctioned events in Los Angeles and New York during Emmy campaigning season. This year, that number ballooned to 116, according to a spokesman for the academy.

Lorne Michaels, the 73-year-old impresario behind Saturday Night Live and NBC’s late-night lineup, had a big night. Not only did he leave the Microsoft Theater with the Emmy for best variety sketch series, he also produced the broadcast for NBC. It was his second time at the helm for the producer, who last oversaw the Emmys show in 1988, when the Dynasty star John Forsythe was the host.

NBC hoped that the hosts, Colin Jost and Michael Che, the anchors of Weekend Update on SNL, would help reverse a trend of plummeting awards show ratings. In addition to giving the hosting job to Jost and Che, Michaels recruited a number of current and former SNL cast members. The show began with a satirical musical number on Hollywood’s diversity problem led by two stalwarts of the show, Keenan Thompson and Kate McKinnon.

“Yup, we solved it!” Thompson exclaimed. Andy Samberg and RuPaul joined in, along with a group of Broadway-style hoofers identified as the One of Each Dancers.

Che and Jost followed the musical segment. In their opening remarks, they made only veiled references to the Donald Trump presidency, which was a staple of onstage remarks at the last Emmys ceremony, and to the #MeToo movement.

In a taped segment midway through the broadcast, the show returned to diversity as a theme, with Che handing out “reparations Emmys” to black actors from past shows, including Jimmie Walker and John Witherspoon.

The Marvelous Mrs. Maisel, an Amazon series created by Amy Sherman-Palladino about a comedian in 1950s New York, had a big night, taking five awards, including best comedy series. It was the first time Amazon won a top show award at the Emmys, and the first time a streaming service took the best comedy award. Rachel Brosnahan, who plays the show’s title character, won for best actress in a comedy, the first new winner in that category in seven years. (With HBO’s Veep sidelined this year, Julia Louis-Dreyfus hit the pause button on her record-breaking Emmy run.) Sherman-Palladino won Emmys for directing and writing, in addition to the best comedy series award. And Alex Borstein, who plays Mrs. Maisel’s manager, took the award for best supporting actress.

The triumph of Mrs. Maisel was a blow to the avant-garde FX comedy Atlanta, a critical favourite. Donald Glover, the show’s star and creator, took the prize for best actor in a comedy last year. This time, he lost out to Bill Hader, who plays a hit man trying to make it as an actor in the HBO series Barry.

In another win for Barry, Henry Winkler ( 72), won his first Emmy for his role as a well-intentioned but cheesy acting coach. Winkler, who attained lunchbox-level stardom in the 1970s as Arthur “Fonzie” Fonzarelli on the ABC sitcom Happy Days, had been nominated five times before. Before thanking his co-workers and family members, he noted that he had written his acceptance speech “43 years ago”.

In the late-night battle, John Oliver’s weekly HBO show, “Last Week Tonight,” took the best variety talk category for a third year in a row, besting his former colleague at Comedy Central, Stephen Colbert, the host of “The Late Show” on CBS.

In the last year, many TV stars, including Matt Lauer, Charlie Rose, Louis C.K. and Mark Halperin have been forced out after facing allegations of sexual misconduct. Earlier this month, the #MeToo movement reached into the corporate side of the business, when multiple accusations of sexual misconduct led to the ouster of the CBS president and chief executive Leslie Moonves.

But even with #MeToo rocking the television industry, the issue was largely absent from this year’s ceremony. Hanna Gadsby, the Australian comedian who created a sensation with her Netflix special Nanette, made jokes about men – “Nobody knows what jokes are, especially men. Am I right, fellas? That’s why I’m presenting alone.” – without directly addressing the #MeToo movement.

In his opening remarks, Che broached the topic, welcoming “the many, many talented people in Hollywood who haven’t been caught yet”. With President Trump still deeply unpopular in Hollywood, the hosts, presenters and winners referred to him only in veiled terms, if at all, which stood in contrast to this event in each of the last two years, when he was criticized at nearly every turn.

Che and Jost did not invoke his name in their opening remarks. And most winners, like Brosnahan, have stayed away from third rail political fare, instead encouraging viewers to “show up and vote” at this year’s midterm elections. – New York Times