Orla Tinsley: A beacon of best-life positivity through every setback 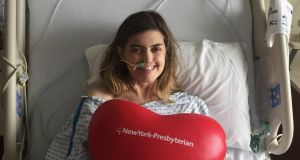 Orla Tinsley: even at one moment of clear distress, when death is too near to laugh at, she imparts a motivational message to the camera

“We should laugh at death, guys,” Orla Tinsley says while carefully lying down next to an Egyptian sarcophagus at the Metropolitan Museum of Art late at night. “If we understood it better we’d know not to be scared.” As she folds her arms over her chest the mirth of the gesture melts away. She looks peaceful.

Orla Tinsley: Warrior (RTÉ One, Monday, 9.35pm) returns to a different image in the New York museum: the journalist and writer’s identification with a marble sculpture of a wounded Amazonian warrior, “embodying everything I admire in womanhood: strength and the ability to be independent”.

It’s telling that Tinsley is alive to any perceived threat to that independence. She herself is an ambitious 30-year-old woman who is dealing with worsening complications from her cystic fibrosis, and currently residing in the world’s greatest city, but living again with her parents as she waits for a double lung transplant.

“She didn’t deserve to have that sort of objectification,” Tinsley says of the sculpture, praised by a museum tour guide for its bare-breasted sex appeal. (She writes about the encounter for her creative-writing MA at Columbia University, although she is too sick to attend classes.)

It may be the closest Tinsley comes to expressing grievance in the documentary, which follows an extraordinary few months in her life, from the summer of 2017 through to New Year, and, although we know it ends well, the gruelling cycle of hope and disappointment it captures could sap anybody’s spirit.

Befitting a tireless campaigner, the film’s directors, Tara Peterman and Sally Roden, present Tinsley’s experience as something instructive: at mentions of her condition, her treatments or her deterioration a glossary of terms mists across the screen. What it shows is extraordinary resilience against grinding circumstance.

Tinsley received seven emergency calls over those months, usually at 5am, each time rushing to hospital with family and friends, hoping for the best, giving gratitude and respect to the donors, and sharing updates on social media.

The documentary is exhaustive and exhausting as it follows her, the soundtrack punctuated with hard breathing and heartbeats. You feel every surge and crash, the immense resolve of her parents, the unwavering support of her friends. Perhaps it is the intensity of the period, but you don’t get a very full sense of Tinsley herself, a beacon of best-life positivity through every setback.

Even at one moment of clear distress, when death is too near to laugh at, she imparts a motivational message to the camera. “I feel like I’ve had a great life. I’ve accomplished what I wanted to accomplish,” she says. “Go after your dreams. Don’t worry about what anybody else thinks.”

Staying positive is a tremendous asset – Tinsley knows, on top of all the dizzying variables of donor organs, that she must be physically strong enough to accept a transplant – but that attitude is also hard work. When chronic illness brings greater risks of depression, warriors may have to battle on many fronts.

Seven proves to be Tinsley’s lucky number. “Merry Christmas Eve, everyone!” she writes online. “I have a set of shiny new lungs!”

It’s a remarkable transformation: her breathing tube and oxygen canister disappear; her long-term prospects, we hear, are good; her general attitude – “That’s really impressive!” she calls to a woman outside with a drum; “music rocks!” – is entirely the same.

I thought back to an early moment in the programme, as Tinsley tweaked the valves of her canister with some effort and announced it “a demonstration of my lack of strength”. Nothing could have been further from the truth.