11 of the best TV shows to watch this week

Franc & his bridezillas are back, Stephen Byrne goes back to sit the Leaving, and cystic fibrosis campaigner Orla Tilsey traces her journey to lung transplant 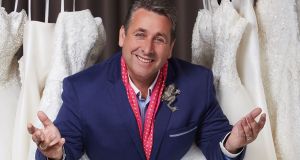 Franc wants you to Say Yes to the Dress

Say Yes to the Dress
Monday, RTÉ2, 9pm
You’re all set for your wedding day – the church and reception are booked, the cake is ordered, and your fella’s got his tin of fruit. But there’s just one all-important thing missing. That’s right: you haven’t got yourself on a wedding-based reality TV show. Well, here’s wedding planner Franc aka Peter Kelly to save the big day. With his crack team of bridal consultants, Franc helps another bunch of bridezillas as they rampage through towns and villages in search of that elusive wedding dress. You can be a fly on the bridal shop wall as the brides-to-be try on a succession of fabulous creations. Franc and his team face possibly their biggest challenge – persuading a bride and her five opinionated sisters to agree on one dress.

Orla Tinsley was not supposed to live beyond her 30th birthday. The journalist (who writes for The Irish Times, among others) lives with cystic fibrosis and is a longtime campaigner for better treatment for others with CS. But, as the landmark date approached, it looked as though she might lose her battle with the disease – unless she received a life-saving double lung transplant. After six false alarms, a donor was finally found, and Tinsley underwent surgery in New York. This documentary, filmed over 14 months, charts Tinsley’s journey in the lead-up to her double transplant, her recovery, and the beginning of a new life. “I was thinking of my donor and their sacrifice, generosity, and forward thinking,” she told The Irish Times in April. “Their ability to have the conversation with their family beforehand, and when tragically they died, they gave me life. It is the greatest legacy anyone could ever give to someone else. I just hope that people will consider being organ donors.” Watch this and you’ll be signing up straight away.

New series. For some of us, a trip to the salon is a chance to relax and be pampered. But for the people who work there, the experience can sometimes be surprisingly dramatic. This show goes behind the scenes at one of the UK’s biggest and wildest super salons to capture the blow dries and bust ups, as well as the infamous staff parties. In the first episode, co-owner Dan fears that boss Cherise has splashed out a little too much on a new promotion, a staff suggestion box leads to frayed tempers, and a client comes in for her first haircut in years.

Moped Muggers: Caught on Camera
Tuesday, UTV, 9pm
In Britain, the number of crimes carried out by moped riders is on the rise – even the home secretary, Sajid Javid, was a victim when criminals on two wheels stole his phone outside Euston station in north London. This documentary takes a closer look at the phenomenon, hearing from other victims and, as the title suggests, bringing viewers footage of the crimes being committed. We’ll see a courier attacked for his bike, a jeweller fighting back against the thieves and some astonishing videos of police in pursuit of the riders. Experts and former police officers are also on hand to offer their insights into this growing phenomenon as well as advice on how to avoid becoming a victim.

Friendships and romances are now regularly started – and ended – via social media, but how well can you ever really know someone based on their profiles? That’s one question at the heart of this three-part reality series. Presented by Alice Levine and Maya Jama, who both know a thing or two about the power of social media, The Circle takes a group of contestants from all walks of life and moves them into separate apartments within the same building. They can only communicate via a voice-activated social media platform, and the goal is to become as popular as possible. But how much of their online personas is real and how much has been invented to win new friends and a prize of up to £50,000?

Peter Mulryan explains why he decided to search for his birth mother year after they were separated. The journey led him from the Tuam mother and babies home, where he was raised, to the Magdalene laundries in Galway, where he found his mother to be hopelessly institutionalised, but managed to form a relationship with her prior to her death. But it wasn’t until he met local historian Catherine Corless in Tuam that Mulryan realised he may have a sister who was born in the Tuam home.

Grand Designs
Wednesday, Channel 4, 9pm
New series. Kevin McCloud meets Spanish architect Jaime and his wife Mimi as they embark on a mission to convert a Grade II-listed folly into a family home in Buckinghamshire. Giving themselves a wildly optimistic six-month deadline to finish before the birth of their second child, it’s not long before the couple hit trouble. Jaime puts all his energies and creativity into the project, using innovative 3D mapping to squeeze living spaces into the tower, but it proves to be an exhausting struggle.

The last time we saw Will Sharpe, he was playing the perennially confused but lovable Shun in the Channel 4 comedy Flowers. Now he’s back on the box in a sitcom adapted from Alex McBride’s wickedly funny nonfiction book Defending the Guilty: Truth and Lies in the Criminal Courtroom. Sharpe plays Will Packham, an idealistic trainee barrister who believes his job is to service justice – until he meets his new mentor (played by Katherine Parkinson). She soon puts him straight, declaring in no uncertain terms that “a barrister’s job is to win”.

Would you go back and sit your Leaving Cert again? That’s what broadcaster Stephen Byrne does in this documentary, which is all about giving yourself a second chance. When Byrne sat his Leaving in 2009, he had a lot going on: the young YouTube star was changing schools, starting a new job at RTÉ and coming to terms with his sexuality, so he wasn’t really in the study zone. When his results came in, he tore them up rather than face the terrible truth. Nine years later, a more mature Byrne decides to repeat the Leaving, going to night classes and returning back to his old school to sit the exams one more time. This time, though, he’s not going to tear up his results.

There used to be a theory that the Mercury Music Prize was cursed, largely due to some the early winners struggling to maintain their success. But it’s doubtful that anyone on this year’s shortlist cares about that, especially as the line-up includes industry veteran Noel Gallagher and previous champions Arctic Monkeys, who have done pretty well for themselves since taking the prize home in 2006. The other nominees at this ceremony, hosted by Annie Mac, are Lily Allen, Everything Everything, Everything Is Recorded, Florence & the Machine, King Krule, Novelist, Nadine Shah, Jorja Smith, Sons of Kemet and Wolf Alice.

Can You Feel It: How Dance Music Conquered the World
Friday, BBC4, 10pm

You don’t have to head to the club to feel the influence of dance music – from the charts to TV advertising, we’re surrounded by 4/4 tunes made or remixed by superstar DJs. This documentary takes a look at how the genre took over, from dance music’s disco origins via house, techno and acid house all the way to today’s EDM explosion. The impressive list of contributors includes pioneers like Farley “Jackmaster” Funk, Steve “Silk” Hurley and Kevin Sanderson as well as the all-conquering David Guetta.  –  Additional reporting: PA