What time is it on? Will there be surprise guests? What will Ryan Tubridy’s jumper be like? 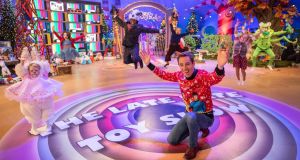 Nothing says “Irish Christmas” like The Late Late Toy Show. And in a year in which we could all do with cheering up, anticipation for RTÉ’s traditional jamboree of toys, song-and-dance numbers and Christmas jumpers is running high.

It kicks off on Friday night, although presenter Ryan Tubridy has revealed that, amid coronavirus restrictions, it’s a miracle it has come together at all.

“Only for grit, determination and diligence to keep the show on the road, we wouldn’t be here today talking. We’d be running a movie,” he said this week.

‘Seeing these children – who all have much-missed and much-loved family back here in Ireland – come together to sing will soften the hardest of hearts,’ Tubridy says

Still, this will very much be a new-normal Toy Show. The big opening number (more of which below) has been partially prerecorded, with performers from the Spotlight Stage School, at the Royal Irish Academy, in Dublin. It will be the first of two musical performances featuring Tubridy (the second arriving halfway through).

One of the themes of the evening will be connecting families kept apart by Covid. “Too many people have spent time looking through windows meeting relatives,” Tubridy said. “This Toy Show is about coming home, back on the couch with the chocolates going, and getting busy laughing. My dream is to make this beautiful.”

The Late Late Toy Show starts on RTÉ One at 9.35pm on Friday and runs until 11.55pm. RTÉ says it will be available worldwide to watch live on RTÉ Player on desktop and app. RTÉ Player and the RTÉ News channel will also broadcast the show live in Irish Sign Language; an audio-description) version will be broadcast on RTÉ One on Monday, November 30th, and available on demand on RTÉ Player.

Recent Toy Shows riffed on The Greatest Showman and Frozen. This year, the unifying concept is the Wonderful World of Roald Dahl. So we’ll see Tubridy as Fantastic Mr Fox and there will be appearances from Charlie and the Chocolate Factory’s Oompa Loompas and a tribute to James and the Giant Peach.

Will there be singing and dancing?

It wouldn’t be the Toy Show without big musical numbers. The evening will kick off with an “opening spectacular” featuring the Dahl characters Veruca Salt, the grasshoppers from James and the Giant Peach, the Twits, Miss Trunchbull, and Charlie and Grandpa Joe, as well as Mrs Fox, the little foxes, and Badger from Fantastic Mr Fox. The choice of song is supposed to be secret until the curtain goes up, but it will, of course, be Pure Imagination, from the 1971 Gene Wilder adaptation of Charlie and the Chocolate Factory.

What about special guests? How will Covid affect the Toy Show ?

There won’t be a studio audience, for obvious reasons, but RTÉ has promised “a selection of talented children from around the world” joining together for a “special one-off performance”. They will be assisted by a “very special” guest singer. One possibility is Ed Sheeran, who appeared on the 2014 Toy Show. But for all we know – or don’t – it might be Trent Reznor from Nine Inch Nails. (I mean, probably not, but it would certainly be memorable.)

Another possibility is Gary Barlow of Take That, who has a new album out. That’s because the kids will be collaborating on Take That’s Rule the World. Eva Norton, from Lucan, will lead from the studio, joined by singers from Australia, New York, South Korea, Dubai, Boston, South Africa and New Zealand. The Aisling Irish Center Céilí Band recorded their contribution in Times Square in New York at 6am.

“I don’t think there will be a dry eye in the land tonight when this performance is beamed across the country,” Tubridy predicted. “Seeing these children – who all have much-missed and much-loved family back here in Ireland – come together to sing from every corner on Rule the World, I think it will soften the hardest of hearts.”

What about Tubridy’s Christmas jumper?

Tubridy’s unique stamp on the Toy Show has been his selection of exciting Christmas jumpers. This year he boldly goes where no RTÉ chatshow host has previously ventured by donning a Star Trek-themed sweater. It is his way of signalling, we assume, that the evening will all be about setting “phasers to fun”.

Tell us about the set. Anything fancy?

Photographs released by RTÉ suggest the Toy Show will feature lots of books, cuddly stuffed animals and a scene in which Tubs takes tea with a tyke at a miniature table. There will also be huge gates affixed with the Wonka logo.

What about the toys?

The Toy Show wouldn’t be the Toy Show without toys. And, although there is no audience, children will be in the studio interacting with playthings while observing social-distancing rules. The toys, which are donated by retailers, will be passed on to charities in time for Christmas.

How did it all start anyway?

To many Irish people the Toy Show may seem as ancient as Ireland itself. In fact it began in 1975; it was originally just a half-hour segment intended to help people stumped for potential Christmas gifts. But it soon became an institution, and by the 1980s it was firmly established as must-see viewing for old and young.

“It all started with Gay, and on the night of the Toy Show Gay transformed into Uncle Gaybo for the nation,” Tubridy said this week. “I remember sitting down myself and watching him at home and the excitement at seeing this Toy Show man in action.”