Late Late Toy Show 2020: The one that ‘nearly didn’t happen’

‘My dream is to make this beautiful,’ says presenter Ryan Tubridy of Roald Dahl-themed show 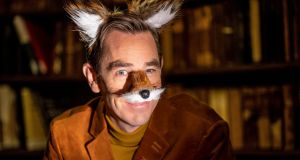 RTÉ presenter Ryan Tubridy will channel Fantastic Mr Fox for the opening number of The Late Late Toy Show 2020. The theme for the show is The Wonderful World of Roald Dahl. Photograph: Andres Poveda

So many fixtures of the Irish calendar, the St Patrick’s Day parades, the Dublin Horse Show, the Rose of Tralee, the National Ploughing Championships and Electric Picnic to name but a few, have gone as a result of Covid-19, but not the toy show.

“This is the toy show that nearly didn’t happen,” said host Ryan Tubridy who will be doing it for the 11th time.

“Only for grit, determination and diligence to keep the show on the road, we wouldn’t be here today talking. We’d be running a movie.”

The original theme was scuppered because of Covid-19 and so was the second one. “We met speed bump after speed bump. To have an existential threat to this joyful programme was desperate.”

In a fractured television landscape with so many choices available, the Late Late Toy Show remains by far Irish television’s most popular programme. Last year’s iteration attracted more than 1.5 million viewers either live or on the player.

This year will be no audience, but there will be a live show with children performing socially distanced in accordance with the strange times we live in.

The theme of Friday night’s show is The Wonderful World of Roald Dahl. The opening number is based on one of the favourite books by the late children’s author, Fantastic Mr Fox, the tale of the crafty fox who outsmarts the dim-witted farmers and eats all their chickens.

The opening number was partially filmed in the library of the Royal Irish Academy and will then cut live to the studio. There will be nods to other Dahl favourites including Matilda, Willy Wonka’s Oompa Loompas, and James and the Giant Peach.

Tubridy said parents and grandparents deserve the toy show as much as the children given how Covid-19 has wrecked family gatherings previously taken for granted.

“Too many people have spent time looking through windows meeting relatives. This toy show is about coming home, back on the couch with the chocolates going and get busy laughing. My dream is to make this beautiful,” he said.

The show will feature two musical performance from him, with the second taking place mid-show on Friday night.

There is also a new international element to the show, with a selection of children from around the world joining together for a special one-off performance. They will be accompanied by a special guest singer. There will be video-recorded inserts into the programme.

RTÉ management will hope the Toy Show can provide a welcome distraction from controversy over some presenters and head of news being photographed at a retirement party without adhering to social distancing guidelines .

Tubridy politely declined to speak about the issue when asked about it by the media in advance of the toy show. “You have to respect that today is about toy show 2020. It’s a question for another day,” he said.

He did, however, speak about his own experiences of Covid-19 which he contracted in March at the beginning of the pandemic.

Unlike his fellow RTÉ presenter Claire Byrne who says she still experiences the after-effects, he has no long term symptoms.

“I was very lucky with the Covid experience that I had. I had a persistant cough. I didn’t take any medication. I wasn’t tired. I took the two weeks to self-isolate and that was that.”

The Late Late Toy Show takes place on Friday at 09.35pm on RTÉ One.