She expresses her sorrow with uncharacteristic trepidation. Then it’s on with the show 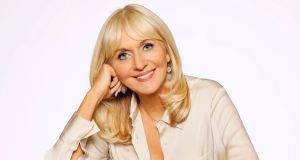 For such an accomplished broadcaster, Miriam O’Callaghan can sound like a caricature of herself. Her array of understanding sighs and empathetic adverbs may have been parodied by impressionists to the point of satirical extinction, yet O’Callaghan continues to “hmmm” her way through interviews with oblivious, or perhaps defiant, abandon.

But when she opens last weekend’s Sunday with Miriam (RTÉ Radio 1), the presenter has a different tone, one which hints that her usual on-air approach is indeed a bit forced. As she apologises for her part in the RTÉ social distancing controversy, O’Callaghan sounds so sincere that her touchy-feely public persona seems flinty by comparison.

Speaking with uncharacteristic trepidation, she expresses sorrow for her lack of pandemic etiquette when posing for photographs at a farewell gathering for a colleague. “It was completely my fault, no one else’s,” O’Callaghan says, with the chastised air of a star pupil unexpectedly sent to the principal’s office. “I know I let everyone down, and for that I will be forever sorry.”

There seems little doubt that the presenter is, ahem, genuinely contrite. But having shown her feelings so candidly, O’Callaghan switches back to form as she ploughs on with her show. Perhaps it’s because her conversations with the singer Paloma Faith and the sibling actors Jane and Stephen Brennan are so brief, but O’Callaghan sounds like she’s going through the motions. She asks cookie-cutter questions such as “What inspirations did you draw on?” while humming away during the responses. It’s a missed opportunity, because her guests merit further engagement.

Only during her interview with Billy Hutchinson, the Progressive Unionist Party leader and former UVF member, does O’Callaghan assert herself. She gives her guest the floor to recall his upbringing in a working-class Protestant family on Belfast’s Shankill Road, before becoming a loyalist paramilitary as the Troubles flared. But when she does intervene, her questions are pithily to the point, asking bluntly why Hutchinson murdered two Catholic men in 1974.

“Because we had information on them,” he replies. “Whether that information was correct or not, that’s what happened.” It’s banal yet terrifying.

Brendan O’Connor is disappointingly reasonable in his verdict on the Montrose fiasco, albeit in a manner that dovetails with enlightened self-interest

Hutchinson, who later played a key role in the peace process, says he wasn’t motivated by sectarian hatred. Rather, he was “caught up” in circumstances, like countless other young working-class men, both Protestant and Catholic. A doubtful-sounding O’Callaghan muses whether this is “too easy”.

Her quiet yet firm handling of the segment challenges her guest without things turning acrimonious: the results are absorbing if unsettling. When O’Callaghan channels her instinctive personal touch into deft questioning, the only regret is that she doesn’t do it more often.

As to the socially undistanced send-off currently preoccupying RTÉ, subsequent coverage suggests the national broadcaster has adopted the tactic of “always apologise, never explain”. While O’Callaghan joins the news anchors Bryan Dobson and David McCullough in publicly prostrating themselves for their unmasked transgressions, the network’s management mysteriously goes missing.

Discussing the issue on his show’s Sunday newspaper panel, Brendan O’Connor (RTÉ Radio 1, Saturday and Sunday) remarks that he asked for an RTÉ spokesperson, “but none was available”. Faced with this curious absence, O’Connor muses that perhaps “RTÉ feel they have nothing to add to this conversation at the moment”. This official absence speaks volumes. (It isn’t a one-off: on Radio 1’s Today with Claire Byrne the following morning, the host notes that her show requested an RTÉ spokesperson and submitted a list of questions but were rebuffed on both counts.)

As it is, O’Connor helms a stimulating talk on the matter, with thoughtful opinions from his guests. The decision to reduce the size of the Sunday panel makes sense at times like this, allowing people such as the Irish Times correspondent Conor Pope and the journalist Dearbhail McDonald the room to articulate their views, which wasn’t always the case during Marian Finucane’s sprawling discussions.

Perhaps more surprisingly, the host himself is a moderating influence. His career as a newspaper columnist may have presented him as would-be scourge of that dreaded chimera “official Ireland”, but O’Connor is disappointingly reasonable in his verdict on the Montrose fiasco, albeit in a manner that dovetails with enlightened self-interest. “I’m not going to be a spokesperson,” he says, “but I could say that it does differ in substance from Golfgate.”

On The Pat Kenny Show, the host underlines his status as Irish radio’s dweebiest personality during his talk with the UCC psychology lecturer Gillian Murphy

Overall, O’Connor has a good weekend, particularly on the Saturday show, which is emerging as the stronger of his two slots. As well as the obligatory pandemic debriefs with reliably interesting guests like the consultant Jack Lambert and the behavioural economist Pete Lunn, he also has a terrific conversation with the veteran synth-pop star Gary Numan. During the long-form interview, Numan tells how his diagnosis with Asperger’s affected his music, his career and his personal life.

Given his slightly disconnected public image, Numan comes across as funny as well as frank, while O’Connor is a fine foil, gently ribbing his guest yet sounding thrilled at the encounter. Who needs RTÉ spokespeople anyway?

Over on The Pat Kenny Show (Newstalk, weekdays), the host underlines his status as Irish radio’s dweebiest personality during his talk with the UCC psychology lecturer Gillian Murphy about why people believe fake news. It’s a fascinating discussion, right up Kenny’s street and full of informative nuggets: Murphy’s research suggests that people who deem themselves well-informed about the pandemic can actually be more susceptible to spurious assertions.

Murphy notes that another key element in filtering news is “cognitive reflection”, the ability to assess information rather than go with gut instinct. To illustrate this, she poses a brainteaser. In a field, a patch of weeds doubles in size every day; if it covers the entire field in 50 days, how long did it take to fill half? “Forty-nine,” replies Kenny, without hesitation. “Excellent, Pat,” replies Murphy, who says that many respondents answer 25 days.

Kenny is palpably chuffed, but also relieved. “I’ll give you some information,” he says. “When you asked me that question my brain went into overdrive; I was terrified of getting it wrong.” It’s a revealing statement but also oddly endearing. It’s fine to be a caricature of oneself sometimes.

On Wednesday, Sean Moncrieff (Newstalk, weekdays) talks to his colleague Kieran Cuddihy about upcoming items on the latter’s show, The Hard Shoulder. After mentioning a couple of topical subjects, Cuddihy gets to the real action.

“We’re going to be talking about birthday parties. Obviously, they’ve all been cancelled over the past year. Awful for the kids, bloody brilliant for the parents, though,” Cuddihy chirrups gleefully. Moncrieff doesn’t exactly demur. “Absolutely, yeah,” he laughs. “The bouncy-castle industry must have been eviscerated at this point.”

It’s cruel, but in this instance Newstalk’s straight-talking presenters may be right: they’re only saying what every parent is thinking.