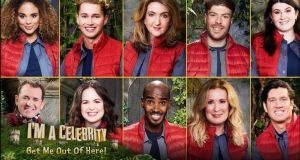 Coronavirus has changed the world – but hasn’t had all that much of an impact on reality TV. Strictly Come Dancing and The Great British Bake Off have shrugged off a once-in-a-century pandemic to pirouette on regardless. As has I’m a Celebrity… Get Me Out of Here! (Virgin Media One), which indeed got out of tropical Australia only to fetch up at a freezing castle in north Wales.

The only prominent casualty is RTÉ’s Dancing with the Stars, which announced in July, for obvious reasons, that it was skipping 2021.

A jungle-free, subzero I’m a Celeb is a different viewing experience, obviously. The creepy-crawlies with which the contestants are traditionally hosed down are smaller. And, at time of writing, nobody has been required to eat fried kangaroo genitals. (We, obviously, all live in hope.)

Yet as week one came to a close it was surprisingly just how pre-Covid the entire affair felt. The big drum roll on Sunday night preceded news that the public had voted for AJ Pritchard (brother of Dancing with the Stars hoofer Curtis) had been voted to undertake the next trial, along with the soap star Jessica Plummer.

It’s called the “Harm-ory” and will be precisely the same as every other I’m a Celeb trial ever, in that it will involve the victims being pelted with cockroaches while Ant and Dec chime in with useless advice. This is the way.

Is it a comfort to have I’m a Celeb here for us through second lockdown? On the one hand, it’s encouraging to know nature can chuck its worst at humanity but that it can’t stop Ant and Dec delivering terrible one-liners through the month of November.

On the other, this is not yet a classic season of I’m a Celeb. For one thing, ITV has dispensed with the truly eccentric contestants. That is probably for the best. As awareness of mental health has increased so it has become less enjoyable watching C-listers fall apart on live television (not that I’m a Celebrity was ever particularly gratuitous).

Yet if psychological jungle fever is quite correctly no longer on the menu, what instead? Shane Richie, Jordan North, Mo Farah, Victoria Derbyshire et al – plus the late arrivals Russell Watson and the West End star Ruthie Henshall – are a rum bunch yet not particularly riveting company. Not riveting all in fact.

They rub along well enough and seem to have brought their lockdown spirit to Gwrych Castle. But while it will never not be fun watching bugs tossed at soap stars, it would be a stretch to call this must-see viewing. Perhaps the absence of an Irish contestant to follow on the heels of Andrew Maxwell in 2019 explains the lack of excitement.

Gwrych Castle is supposedly stalked by a headless, moaning spirit. Alas, the only thing haunting I’m a Celeb 2020 is the ghost of the more entertaining show it used to be.