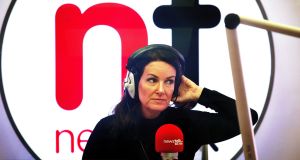 Not so long ago, celebrating Christmas in January was solely the province of those working for cheapskate companies allergic to shelling out for festive office parties. But in yet another sign of our extraordinary times (as if there haven’t been enough already), we may all be exchanging Yuletide greetings and dodging kisses under the mistletoe late into the new year. At least that’s the case if we are to follow the idea mooted by one health expert on Newstalk Breakfast (weekdays).

On Wednesday morning’s show, co-host Ciara Kelly interviews Tomás Ryan, associate professor at Trinity College’s school of biochemistry and immunology, about the progress made under Level 5 restrictions so far. Ryan is reasonably positive about how things are going, pointing out the reduction in Covid-19 infections. “We’re doing better than a lot of us anticipated,” he says, which counts for high praise these days. But rather than lifting the measures on December 1st, Ryan thinks it is “in everybody’s interests” to extend the restrictions by a few more weeks.

Kelly sounds taken aback, doubting that an extension is in the interests of all: “We’re asking huge things of people.” But her guest thinks removing Level 5 on schedule may result in another lockdown in January for no good reason: this year’s seasonal festivities won’t “be anything like the Christmases we normally have anyway”. When Kelly asks whether we should just skip Christmas altogether, Ryan floats his novel idea. “One way of looking at this would be to delay Christmas until the end of January and have a real Christmas and a real party then,” he says. Well, it wouldn’t be your usual Christmas, that’s for sure. Kelly, meanwhile, deserves credit for not laughing in derision, though equally she must know that she’s struck radio gold.

In truth, Ryan’s suggestion sounds more like an off-the-cuff aside than a serious proposal. Even so, it becomes part of the news cycle, on Newstalk anyway. It is an occupational hazard of the pandemic era in which a cadre of academics have become unlikely media celebrities, albeit in the way that hirsute Open University lecturers were television stars in the 1970s. With the odd exception, they’re on the airwaves for their expertise rather than their breezy charisma: it might be wiser to stick with what they know.

As for Kelly, her own medical background combines with her confidence as a broadcaster to good effect. Her on-air partnership with co-host Shane Coleman is working nicely too, as he jokes with Kelly for having “a skip in her step” as new Covid travel protocols open the possibility of holidays abroad. It all helps to position Newstalk Breakfast as an engaging alternative to the behemoth of Morning Ireland.

Cuddihy also invites consultant Prof Jack Lambert to comment on the idea that Christmas be postponed. “That’s a very Grinch-ist comment to make,” says Lambert, one of the more pragmatic medical stars to emerge during the pandemic. Instead, he suggests the remaining lockdown period should be used to develop and communicate Covid-prevention strategies, though neither guest nor host seem hopeful this will happen. “The silence on this front from Government is deafening,” Cuddihy says glumly. Meanwhile, Lambert prefers the efficacy of simple acts such as wearing face masks to punitive lockdowns. “We need to say what people are doing right,” he says. It’s a more plausible approach than putting the entire country on the naughty list.

Overall, Cuddihy has eased in nicely as host of his drivetime show, even if uneven moments remain. The opening editorial slot in particular seems like a redundant holdover from his mouthy predecessors, Ivan Yates and George Hook. Cuddihy’s spiel about the impracticality of a zero-Covid strategy has some good points but is undercut by his stagey irritation. He’s more effective when letting his feelings known in passing during interviews, even – or especially – when he exudes kid-in-a-toy-shop excitement during his conversation about space travel with British astronaut Tim Peake. Generally, however, his show continues to enjoy a smooth launch.

Things come crashing down to earth on Lunchtime Live (Newstalk, weekdays), when presenter Andrea Gilligan talks to Áine, a caller whose family life has been heartbreakingly upended in recent months. Áine phones Gilligan’s show to plead for respite care from the HSE: she is the sole carer for her three children, all of whom have autism.

Áine outlines how her eldest son has been undergoing chemotherapy since becoming ill with cancer earlier this year and then recounts how her husband died suddenly in June of a suspected aneurysm, a shocking loss which her non-verbal daughter has found particularly difficult to process. “I literally couldn’t mourn my husband because my daughter was hitting out,” she says.

These unimaginably difficult experiences have left her fearful for herself and her children – “If I get Covid, I am screwed” – yet she receives minimal respite support. (She and her husband never applied for such support, feeling others needed it more.) Gilligan eschews obvious expressions of sympathy, instead simply asking how her guest is doing. “I’m here and that’s it, to be honest,” Áine replies.

After the call ends, Gilligan struggles to sum up what she’s heard. “Áine’s story is just . . .” she says, before helplessly trailing off. If there’s a sliver of brightness, it is when the HSE gets on to Gilligan to say it will contact Áine about her situation, though it’s telling that it takes a gut-wrenching radio item to spur such action. After that, it’s hard to feel celebratory about anything.

Radio Moment of the Week: Byrne brings it all back home.

With new rules on travel planned for the end of the month, Claire Byrne (Today with Claire Byrne, RTÉ Radio 1, weekdays) looks at the impact on people planning to return to Ireland for Christmas. Byrne is typically balanced, informed and forensic during her discussion, but later, she uncharacteristically shares her personal views. “We have a text message in block capitals, which means I have to read it out,” she archly remarks, before reading on. “‘Will you stop about coming home for Christmas, we don’t want them.’ Well, if you’ve ever lived away, you’ll know how important that trip back home is,” she says, recalling her own experience as an emigrant. “The first Christmas that you’re anticipating coming home, if somebody said you couldn’t do it, you’d be utterly heartbroken,” she says, concluding that “it’s not that simple for many people”. As an intervention, it’s understated yet effective: Byrne at her best.