Her RTÉ show can stray towards sounding a bit judgy, no matter how sensible its advice 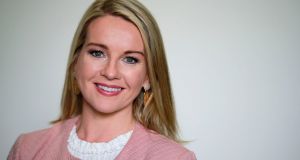 As the days grow ever shorter in this most gloomy of years, Tuesday’s reopening of “nonessential” retail provides a much-needed glint of brightness, at least if the vox pops with giddy shoppers across the airwaves are anything to go by.

“I couldn’t sleep last night I was so excited. We’d missed the shopping for so long,” one woman queuing outside Penneys in Dublin city centre informs Will Goodbody on Morning Ireland (RTÉ Radio 1, weekdays), to a backdrop of friends slagging each other about buying “knickers and bras”. You’d have to have a heart of stone, or possibly be a member of Nphet, not to smile at such irresistible good humour.

But the purgatorial mindset that has become second nature to everyone throughout the pandemic is hard to shake. So it is on Today with Claire Byrne (RTÉ Radio 1), as joyous encounters with returning punters are followed by sober interviews with health experts putting a damper on such perilously high spirits: shopping and fussing, to paraphrase the old bonkbuster formula.

The commendably thorough Byrne has to explore stories from all angles. But the earnest advisories she hosts seem to frame any minor alleviation from pandemic measures as an opportunity for feckless behaviour by an errant public

Byrne initially hears from the reporter Evelyn O’Rourke, who has been chatting with people at the Penneys store in Blanchardstown, in northwest Dublin. (The clothing chain is treated with almost totemic reverence by RTÉ: Wednesday’s Morning Ireland carries a report from its Dundrum branch.) Again, the positive atmosphere is palpable. With only minor sacrilege, O’Rourke compares the setting to a “scene from the nativity”, albeit one where the gifts are mainly pairs of pyjamas, judging by the shoppers’ hauls anyway.

Some will sneer at this as vapid consumerism, but the social aspect is far more striking. The novelty of venturing back out is highlighted by several respondents, who are often en route to work. Equally notable is the gender make-up: all the interviewees are women, many of them mother-and-daughters. “It’s a good barometer of how those women are feeling about with restrictions,” O’Rourke says of the experience, “They tell you that they miss this.” Byrne tries to get into the swing of things. “Grab us a few pairs of pyjamas,” she tells O’Rourke, with not entirely convincing jocularity.

Sure enough, the subsequent discussion about reopening shops is much more downbeat. Byrne sets the tone by repeatedly quoting Nphet’s latest adage, “Just because you can doesn’t mean you should.” The infectious-disease expert Dr Clíona Ní Cheallaigh shares these concerns, as does the behavioural scientist Hannah Durrand: “These restrictions are an upper limit, not a target.” As for anyone “rushing out and going shopping”, Durrand adds, “I don’t think we can make judgments about what’s essential to other people, but we need to remember to take our own responsibility for our own behaviour and avoid crowded shops.” Which sounds a bit judgy, no matter how merited the advice may be.

As the host of a news-driven magazine programme, the commendably thorough Byrne has to explore stories from all angles. But the earnest advisories she hosts seem to frame any minor alleviation from pandemic measures as an opportunity for feckless behaviour by an errant public.

Wednesday brings more ostensibly positive developments, with the news that UK authorities have approved Pfizer’s Covid-19 vaccine. But inevitably there’s a twist. As orderly lines form for shops in the Republic, people in the North, along with the rest of the UK, have apparently jumped the queue for shots, as EU regulators have yet to approve the vaccine for use here.

Speaking to Dr Linda Bauld from the University of Edinburgh on Wednesday, Byrne quotes the European Medicines Agency as saying that its longer approval process is safer than the UK’s. “I guess I would contest that,” Bauld replies, calling the British regulator “incredibly robust” while noting the European agency is “more complex”. She acknowledges there are still unanswered questions about the vaccine and huge logistical challenges, but her mood is upbeat. The Trinity College immunologist Prof Kingston Mills echoes Bauld’s caveats, but he too deems it “really, really good news”. Not that one would know it from the tenor of Byrne’s show.

There’s no such reticence from Jennifer Zamparelli (2FM, weekdays), who on Wednesday is “delighted” that Irish shoppers reportedly spent €6 million an hour the day before. “People of Ireland, you are crazy,” she proclaims, her animated tone suggesting she’s pleased with this state of affairs. That said, Zamparelli admits she wasn’t “brave enough” to go shopping herself. “I couldn’t face the queues and the madness,” she says, before adding, almost as an afterthought, “and the Covid.”

This encapsulates Zamparelli’s show, which trades in brash escapism but never quite slips the pandemic’s gravitational pull. The presenter’s style remains that of an overexuberant party host, punctuating her sentences with “lads” and “right”, while glorying in her mishaps: “I made a complete balls of that” is a typical interjection.

Her conversations are similarly loose. A chat about overpriced fashion with her fellow 2FM presenter Cormac Battle turns into an enjoyable reminiscence about their youthful sartorial follies. Meanwhile, the show’s “Ulster correspondent”, the model Grainne Gallaghan, discusses such urgent issues as the discovery of dinosaur fossils in the Co Antrim peninsula of Islandmagee. “It sounds like a nickname for someone’s pubes,” Zamparelli pithily remarks.

But the host is unable to ignore the pandemic completely. She talks to Mary, a retail worker, about the stresses of working while remaining at risk of infection, although the presenter approaches the item as a friendly natter than as a rigorous interview.

By and large, however, the mood is unabashedly buzzy. (Wisely so, too: an ill-judged idea for a discussion with anti-maskers back in September was dropped amid chastened apologies.) True, Zamparelli’s frenetic style and, ahem, broad humour can quickly wear thin, at least for those listeners outside 2FM’s target audience. But in this instance, she provides a bracing change from the brow-furrowing that prevails elsewhere. Sometimes people just deserve a break.

Moment of the Week: Calamity Ray

It’s a week of mishaps on The Ray D’Arcy Show (RTÉ Radio 1), but he shows his coolness in the face of adversity. On Wednesday, he casually remarks that he’s “a bit incapacitated”: it turns out his right hand is in a splint after “a spill off the bike”, so he has to “reconfigure” the studio. “You don’t need to know this. Well, you do, in case it all goes horribly wrong,” he says breezily. Oddly, he sounds more relaxed than usual. Similarly, he plays it cool on Tuesday, when he turns the airwaves over to the newsreader Marion Ní Shúilleabháin for a Nuacht bulletin that never comes. After a long silence, D’Arcy hurries back on air. “I was heading off to the loo,” he says jauntily, resuming his duties. Again, D’Arcy seems reinvigorated by the gaffe. Perhaps his show needs things to go down the toilet more.