Including Mank, The Prom, Ma Rainey’s Black Bottom, The Midnight Sky and Bridgerton 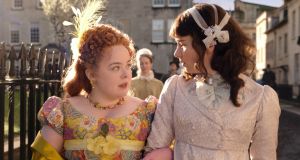 December 1st
Who is Nate? What is Nate about? And what the hell is going on? All these questions bubble up to the surface but are never quite answered during Natalie Palamides’s exhilarating, anarchic show that pushes the limits of comedic expression. Nate is not about leaving an audience satisfied. This is not the staid, familiar, almost always masculine world of observational comedy. It’s a show that tingles with the discomfort of performance art whilst still providing the lacerating laughs of a traditional “stand-up” act.

Palamides plays the titular dudebro dressed in a plaid jacket over his shirtless hairy torso, who sports a yellowing black eye and guzzles a protein shake while surveying the crowd. Nate pieces together his biography with help from the audience; it’s a story that covers love, relationships and masculinity, but mostly it’s about consent. It’s about the consent between this audience that chose to be around Nate and who participate in the show (or choose not to) and what Nate can elicit from this relationship, and about the trust the audience has in him as the person onstage; together they construct the show. It’s an intense, intimate set-up that through its shocking twists and surreal humour manages to ask big questions about sex, gender, gratification and control. As powerful as it is ridiculous, Nate packs a proper punch in the face of comedy.

Despite its deliciously Dublin-sounding film title, Mank is, sadly, not a Joycean trip through what the capital’s citizens find unpleasant but rather a highly stylised story about the screenwriter Herman J Mankiewicz. Shot in stark black and white, firmly ensconcing itself in the world of the films of the 1930s and 1940s, David Fincher’s tribute to the golden age of Hollywood is as portentous and dark as you would expect.

Gary Oldman plays Mankiewicz, who, after years of being a jobbing screenwriter, uncredited and languishing in obscurity, finally seizes upon the chance to create a singular masterpiece, Citizen Kane. This vision is overtaken by the legendary upstart Orson Welles, with Mankiewicz being forever overshadowed. It’s a story about the simplicity of the auteur theory and how ego can dazzle; it’s about the self-destructive nature of success, the allure of corruption and the madness of obsession, something that is a common theme in Fincher’s films.

It’s a film that is steeped in the hierarchical movements of the studio system at that time and the complex relationships between these power players and their political and business counterparts. If a primer is required, viewers could do worse than listen to Karina Longworth’s masterful podcast You Must Remember This to familiarise themselves with the finer points of the story before diving in.

More of a pop-culture curio on this side of the Atlantic, known as the singer whose 1997 biopic gave Jennifer Lopez her breakout role, Selena Quintanilla was seen as “the queen of Tejano music”. The much-loved Mexican-American pop star died tragically in 1995 at the hands of an associate.

Starring Twilight’s Christian Serratos as Selena, this nine-part series chronicles the singer’s pre-fame life and how she and her devoted family worked their way into an unforgiving, ruthless music industry. It explores how she created her own niche and went on to become one of the world’s most successful Latin American singers.

Ryan Murphy has a gift for viewers this festive season. Although it depends on how you feel about Meryl Streep and the terminally divisive James Corden whooping it up in a high-school-high-jinks musical-comedy caper, so some might want to keep the receipt handy.

The Prom sees Streep and Corden play Broadway stars who embark on a publicity stunt to help revive their careers. Upon hearing of the plight of school student Emma (newcomer Jo Ellen Pellman), who is banned from attending the prom with her girlfriend, the gruesome twosome, along with their fellow craven attention-seeking actors Angie (Nicole Kidman) and Trent (Andrew Rannells), travel to small-town Indiana to throw Emma the party of a lifetime. What starts as a hollow act of self-promotion for the actors turns into something deeper, with Emma’s story and her fight against the prejudices of the other students and their parents managing to touch the actors’ hearts.

Murphy has again amassed an all-star cast, which also includes Kerry Washington and Keegan-Michael Key, for what is essentially a Glee special. It may be enjoyable to see Streep twirling about in a mass of sequins in a high school gym, or Andrew Rannells singing in a shopping centre fountain, or Kidman playing a character who is not in any emotional turmoil, but Murphy’s saccharine idea of camp can sometimes feel like feasting on the strawberry fondants at the bottom of the Roses tin.

Not to be confused with the hit show Pretty Little Liars, or the Instagrammable fashion label Pretty Little Thing, or even the trilby-wearing Libertines offshoot band Dirty Pretty Things, Tiny Pretty Things is a teen drama with a touch of Black Swan.

Set in a prestigious ballet academy, it follows the lives of a diverse group of students who are all ambitious and determined, wanting to pirouette into the best ballet companies at any cost. With a nod to Netflix’s Spanish high-school series Elite and trash cinema’s finest offering, Showgirls, the drama centres on the scandal that reverberates throughout the institution when a student dies after falling from a rooftop. The competitive crew circle around the new dancer who takes her place and secrets begin to unravel, threatening to destroy the lives of the students and the reputation of the school.

The first run of this charming Norwegian romantic-comedy series was a cult favourite among discerning viewers last year. The premise may have all the ingredients of a cheesy, predictable Hallmark movie, but the sharp writing makes the show that bit more acerbic and refreshing. It’s not exactly a festive Fleabag, but it was filled with enough sardonic realism concerning the state of singledom to make it compelling viewing.

The first season saw Johanne (Ida Elise Broch) struggling to cope with the societal pressures on women in their 30s. Tired of being relegated to the kids’ table at celebrations and being the source of her parents’ pity, Johanne invented a boyfriend and gave herself 24 days to actually find one before her family’s Christmas party. Now back for a second season, Johanne is still on the hunt for true love even in the face of cynicism and rejection, although with her family’s world falling apart around her, this time Johanne is left pondering: is romantic love really all we need?

George C Wolfe’s ode to the legendary blues singer of the 1920s has a bittersweet quality to it due to the film being Chadwick Boseman’s last on-screen performance. Boseman plays Levee, the troubled, arrogant trumpeter in Rainey’s band who clashes with the singer, played by Viola Davis, as he attempts to turn her traditional blues act into something more jazz-influenced.

The claustrophobic, tightly wound story, based on the play by August Wilson, takes place over two days in the recording studio, as tempers flare and the musicians tussle, with the dynamic, forceful Rainey unwilling to concede or to be controlled by the men in the room. These issues spill over into wider societal problems, with the film focusing on the redemptive, comforting beauty of the blues, and on music as a source of escapism but also one that speaks bitterly and truthfully to its audience.

London Hughes: To Catch a D*ck

The comedian London Hughes challenges the confusing world of modern dating in this sparky, provocative live show. Dialling through her own romantic history with stories of her mishaps and adventures, Hughes ponders the mystery of why so many clever, accomplished, beautiful women are still single.

George Clooney directs and stars in this post-apocalyptic, survivalist sci-fi saga. Adapted from Lily Brooks-Dalton’s novel Good Morning, Midnight, it’s the story of a lone Arctic scientist, Augustine, who must warn a crew of homeward-bound astronauts about a global catastrophe. Accompanied by his young daughter, Iris (Caoilinn Springall), he must traverse treacherous landscape to reach an antenna with a better signal to contact the space station and inform them that they may have no home to return to.

It’s a philosophical drama about survival and sacrifice, with hints of the darkness of The Road and the humanity of Gravity that screenwriter Mark L Smith (The Revenant) blends into a melancholy futurism that questions our fate on Earth. In the closing weeks of 2020, The Midnight Sky may read more like a vision of what to expect next rather than a bleak fantasy.

Shonda Rhimes’s eagerly anticipated Regency romance finally arrives on Christmas Day. Based on Julia Quinn’s hugely popular novels, the series follows the lives of the eight Bridgerton children. Their romantic entanglements, ill-chosen suitors and potential matches are all fodder for the popular society scandal sheet written by the mysterious Lady Whistledown (voiced by Julie Andrews). As the family attempts to push Daphne (Phoebe Dynevor), the eldest daughter, into the marriage market, the debutants and devious households that surround them begin to calculate and scheme against the powerful Bridgertons.

Featuring an ensemble cast that’s bursting with young talent, from Derry Girls’ Nicola Coughlan to Vanity Fair’s Claudia Jessie and For the People’s Regé-Jean Page, Bridgerton is a star-making showcase. Vibrant, indulgent, glamorous and thrilling, with extravagant setpieces and elaborate dance sequences, it’s a Regency London that is sizzling with passion and life beneath its tightly bound corsets.