Patrick Freyne on Christmas ads: ‘No one belongs on the naughty list.’ This should be big news

Tesco abolishes the rule of law, and the grotesque yuletide freak Kevin the Carrot is back

A teenager anonymously helping out his elderly neighbour in Woodie’s heartwarming and emotional Christmas TV ad, shows the generous spirit of people looking out for each other during the winter holiday season. Video: Woodies 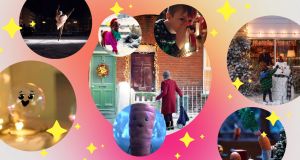 That grotesque yuletide freak Kevin the Carrot is back in a new Aldi ad. Kevin is, as you may recall, a bewitched man-carrot who wants nothing more than to be part of a big Christmas dinner and to be eaten. It’s unclear what his day job is, but he begins this ad piloting a fighter jet through the mountains with his friend, a talking turkey. Why is he in a plane with a talking turkey? Because god is dead and hell is empty of its demons.

The turkey, who though gifted with speech is a fool, accidentally ejects Kevin from the plane, and he plummets to earth attached to a flaming parachute. He meets a hedgehog. Like the hedgehog in this year’s John Lewis ad, this hedgehog is wearing a scarf but not pants. This must be their thing. Kevin the Carrot rides the hedgehog as if it is customary for verbose root vegetable to treat small mammalian hedgepigs as their steeds until they both plummet into an icy river to finally be rescued by Santa who takes them on a bike through the sky for no good reason. Kevin is welcomed back by his carrot family just in time to be eaten for dinner, which is what he wanted all along, the weirdo. Watch it here

Observed by her neighbours, an older lady, Mrs Higgins, comes and goes from her terraced house with her dog Kevin via a banjaxed gate. Time passes. She arrives back one day to find Christmas lights over her door and the gate repaired. Across the road, a teenage boy puts away his tools, bought, no doubt in Woodies. He has fixed her gate. He has also technically been trespassing and in some US states Mrs Higgins would have been completely within her rights to shoot him on crossing her threshold. Luckily, this is Ireland and, as this is his first offence, he’ll likely never see the inside of a jail. Watch it here

In this ad, a farmer, to his wife’s confusion, dresses his favourite goat up in a beret, pink jacket and scarf. She, in fact, looks uncannily like Emily in Paris. “Everyone deserves great gifts this season,” says a voice-over as the little goat spins on some ice much as Emily spins within a protective bubble of American manifest destiny. Rather darkly, the farmer’s sheep, also visible in the ad, are kept cold and nude and apparently giftless. Not sure what TK Maxx are saying with this exactly. Watch it here

“Is he still coming this year?” asks a delightful child of his parents in the run up to Christmas while his smaller sister stays relatively quiet. As they decorate and shop and bake cake, he keeps asking variations of this question and we assume that he is speaking of that anarchic seasonal trespasser, Santa Claus. In fact, it’s a Covid-themed ad and he is talking about his grandfather. I wipe away a tear. This is very relatable. I too have ingratiated myself with an elderly relative for inheritance purposes at the expense of my sister. Watch it here

“What’s the most Christmassy thing you can think of?”

“Well, it would probably be ‘Everything having a face’.”

“Boxes and sponges and tissues and soap, what if they all had eyes and a mouth?”

“Even toothpaste? Would the toothpaste have a face, even though it’s viscous?”

“I don’t understand would each bit you spurted from the tube have a separate face? How does that work? Is the toothpaste tube giving birth to little paste entities?”

“What sort of life is that?”

“I know, right? And there’s more! What if some bubbles that have just emerged from a bath also have eyes and a mouth and thus are conscious in a moment of agony and ecstasy during their brief tortured and inexplicable existence.”

“No because logically they would only scream. Maybe we’ll have the soap sing or something if you feel squeamish about.”

“No, I like it. But is it Christmassy enough for our ad?”

“It’s grand. We’ll throw a Christmas tree in there somewhere.”

(In fairness to Boots, it has donated substantially to The Hygiene Bank in the UK fighting hygiene poverty, which is a good cause). Watch it here

A teenage girl is cast in a ballet and practises in her flat, in underpasses, on rooftops and in stair wells. She is observed by neighbours and family members who buy things on Amazon instead of using small local suppliers who could use the custom. But, oh no, it is Covidtime and the concert is cancelled. She is depressed. Everyone prevails on her to perform in the courtyard of her flat complex in the falling snow to a twinkly orchestral crescendo of The Show Must Go On by Queen. She’s very good and everyone cheers instead of going, “Oh you think you’re soooo great!” or “That’s grand but you should really do accountancy. where the jobs are”. Which is basically the difference between the current generation and the ones that have gone before. Watch it here

Over the languid tones of Fleetwood Mac’s Albatross and footage created by someone who is sexually attracted to food, Olivia Colman, aka the Queen, describes said food in crisp monarchic syllables. Salmon smoked over oak and chestnut? The triple chocolate panettone? Gin liquor with edible gold leaf? We are marking our time in our generation’s biggest test by literally drinking gold. For the first time I can see the virus’s point of view. Watch it here

Tesco’s Christmas advertisements take aim at our moralistic pandemic culture by having a number of people confess their pandemic transgressions in Christmas settings – buying too much toilet paper, not wearing trousers for work meetings, not doing YouTube pilates. Then a voice announces “No one belongs on the naughty list.” This should be big news. Tesco have abolished the rule of law. We now live in consequenceless anarchy untouched by Santa’s firm and dispassionate judgments. Do Tesco really have the authority to decree this? Apparently so. “There is no naughty list!” It’s the stuff of Nietzsche and Aleister Crowley. “’Do what thou wilt’ shall be the whole of the law” was the original working tagline. Watch it here