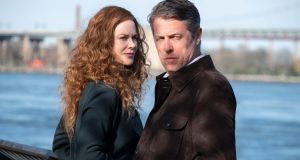 Monday night’s finale of The Undoing, on Sky Atlantic, finally wrapped up the programme’s modest mystery (Who murdered Elena Alves?), tickled us one last time with Nicole Kidman’s fab winter coats and seized the attention of the internet. (“Based on Twitter I’ve deduced that a fancy coat played by Hugh Grant killed a baby,” one writer quipped on Twitter.)

Grant himself planned to avoid social media after the show’s conclusion, he said, “but then I took a quick look, and two hours later I’m still scrolling.” “There are plenty of people who are telling me how old I look, and they’re not wrong,” he added. “But the fact that they liked the finale is huge.”

If The Undoing didn’t quite reach the “Who Shot JR?” or “Who killed Laura Palmer?” level of fevered fascination, the six-week limited series did qualify as event television in the pandemic era, something to obsess about while the world was on pause. Socially distanced viewers with time to kill gathered around the social media water cooler to lust after the resplendent clothes and spin increasingly implausible theories.

Grant’s Dr Jonathan Fraser was the main suspect, but was that too easy an answer? What about the son, Henry (Noah Jupe)? Or the father, Franklin (Donald Sutherland)? Not even the police detective (Édgar Ramírez) was completely above suspicion. Celebrity fans like Kerry Washington, Ava DuVernay, Kourtney Kardashian and Carole Radziwill joined the de facto viewer jury, while Kidman and Ramírez encouraged guesswork.

But after a red-herring buffet, the final twist served up the person originally positioned as the obvious suspect; Jonathan Fraser turned out to be – yes – a killer. Jonathan murdered his mistress Elena, partly because she wanted to befriend his wife, Grace (Kidman), and partly because he was just a narcissistic sociopath who happened to have a sculpting hammer at hand. Could it really be that simple?

“One of our goals was to have the audience experience him as Grace did,” showrunner David E Kelley said. “Our starting point was to give you the truth of Jonathan, and then dare you to discard that truth along the way.” The timing of the show, he added, fits the national mood in the US. “The ferocity and the willingness of people to believe in a narrative when the facts are telling you otherwise?” Kelley said. “We’re all a little too familiar with that.” In separate phone interviews, Grant (from England) and Kelley (from California) discussed how they shaped the finale, including the pivotal murder scene flashback. These are edited excerpts from the conversations.

Part of the show plays with our longtime perception of Hugh Grant and what we might think of as typical Hugh Grant roles. The Undoing weaponises that charm against us.

HUGH GRANT: Honestly, I wanted to get away from those characters. I’m more comfortable if I’m playing a character that’s far away from me than some version of myself. This was subject to some debate because I could tell that [director Susanne Bier] wanted me to do just what you said and bring some of the old Hugh to this. I think that was quite clever of her. She thought: “What fun to have this guy. People will say, ‘Not the guy from Notting Hill! Not the guy from Love Actually! He can’t swing a hammer 14 times into someone’s face.’”

DAVID E KELLEY: We put this wonderful, charming man in front of you, and the show pointed to him, and it’s a testament to Hugh’s ability and Susanne Bier’s direction that the audience held tight to the “what if?” of it all: “Maybe he’s innocent.”

GRANT: I think Jonathan is one of those narcissists who simply cannot believe that anything negative can happen to them. It cannot have happened because bad things do not happen to the great Jonathan Fraser. I mean, some might say Trump knows intellectually that he lost the election, but when he’s arguing that it was fixed, he believes every word of it. That was the fun of the character.

Jonathan’s mask falls when his wife testifies against him, in an interesting twist to get around spousal privilege.

KELLEY: We wanted the audience to believe that when Grace took the stand, she could still be corrupted by her own biases. Part of the title of The Undoing refers to the undoing of her marriage, her family and her life, but ultimately it also refers to her salvation. Her husband’s attorney had put on a masterful defence, and she was going to orchestrate the undoing of that defence. There is no rule that wives and husbands can’t testify against each other, but spousal privilege can be waived if the defence calls her to the stand. And nothing she testified went to privileged communications. We wanted to be accurate, to be able to justify the mechanics, but we were not intent on explaining them all.

Do you see the show as commentary about how the wealthy navigate the legal system?

KELLEY: We really did want to suggest the power that goes with Franklin’s influence. Power and money accomplish results that are not available to ordinary people. And that did offer us a nice helicopter scene!

How did the murder, finally revealed in flashback, change in the telling?

GRANT: It was kind of ambiguous at first.

KELLEY: From the original concept, Jonathan was always guilty. That didn’t change. But the severity of culpability did. Originally, Jonathan snapped – one swing and suddenly she was dead. And Hugh really did not want it to be grey. He wanted Jonathan to be a monster. I looked him in the eye and I said: “Really? Because we can go down that route.” Most actors want to push you the other way: “I’m willing to behead seven people, but can I at least be sympathetic?” Hugh had no such compunction. He really wanted to go for it. He urged us to make him a monster.

GRANT: It’s more fun if he’s definitely a killer. And then Susanne Bier wanted to flesh out the murder scene. That was never in the script. When we cut away to the actual killing, that was something she and I put together because David was off fishing.

KELLEY: The murder itself was always part of the architecture. It was scripted, but it was not scripted with a huge amount of detail. That was for Susanne and Hugh to figure out. It can be folly to marry yourself to the scripted words because this is such a heated moment.

GRANT: I can’t stress enough, this is David’s script. I’m just throwing a few currants on top. We had a long exchange of emails, and then we had to make Matilda [actor Matilda De Angelis, who plays Elena] comfortable with the rubbish I’d written. We were just trying to find out what tipped Jonathan over the edge. We came up with a thing where she says that Henry and Miguel could be friends, she and Grace could be friends, they could all meet up and have hot chocolate or something. And that’s what caused Jonathan to snap, like a dog in a car when someone approaches. I wrote in my notes that it wasn’t his first violent episode. There had been a couple that had been hushed up, I think.

We went into a rehearsal room with a hammer, and we just experimented. It could not have been more awkward because it was the first week of shooting, and this poor actress, the first thing she has to do in America is kiss an old man and then be beaten to death: “Kiss me. Smash me on the head with a mallet.” I felt really bad for her. And I just didn’t know how the car ride with my son intercut with brutal sex and murder would go down. It was nail-biting! – New York Times

The true story behind The Irishman