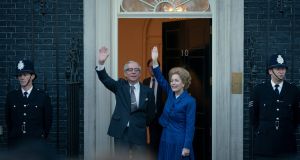 Stephen Boxer and Gillian Anderson in the latest season of The Crown. Photograph: Des Willie/Netflix via The New York Times

The British culture secretary has said he plans to write to Netflix and request that a “health warning” is played before The Crown so viewers are aware that the historical drama is a work of fiction, in an intervention that prompted criticism.

Oliver Dowden said that without the caveat younger viewers who did not live through the events depicted might “mistake fiction for fact”, following complaints that the fourth series of the royal drama had abused its artistic licence and fabricated events.

He told the Mail on Sunday: “It’s a beautifully produced work of fiction, so as with other TV productions, Netflix should be very clear at the beginning it is just that . . . Without this, I fear a generation of viewers who did not live through these events may mistake fiction for fact.”

At present viewers are warned that the show contains nudity, sex, violence and suicide references, and is suitable for viewers who are 15 and older.

The culture secretary’s move was derided by historians including Prof Kate Williams, who said it sounded like a “distraction”. Alex von Tunzelmann, a historian who wrote the Reel History column for the Guardian, wrote: “Netflix already tells people that The Crown is fiction. It’s billed as a drama. Those people in it are actors. I know! Blows your mind.”

The historical drama’s recently released fourth season, which focuses on the late 1970s and ’80s, with the rise and fall of Margaret Thatcher, the Falklands conflict and Lady Diana Spencer’s marriage to Prince Charles, has evoked much criticism.

Accusations of inaccuracies in Peter Morgan’s production span from claims of repeatedly showing the queen “wrongly dressed for trooping the colour” to disputes over Charles’s fishing technique.

But the biggest bones of contention have been in relation to the depiction of Charles’s marriage to Diana. He is portrayed phoning Camilla Parker Bowles every day in the early years of the marriage, and Diana is depicted as forcing plans for the couple’s trip to Australia to be changed after throwing a tantrum.

Mr Morgan has previously spoken about meeting Prince Charles and being told by him that scriptwriting is a hard job and that “it’s not what you leave in but what you leave out that’s most important”.

“He’s one of those characters for whom you have sympathy and criticism in equal measure, a perhaps not uncommon attitude toward the monarchy in general,” Mr Morgan told the New York Times.

Sarah Horsley, whose husband, Maj Hugh Lindsay, died in an avalanche while on a skiing trip with the prince, said she wrote to Mr Morgan to ask for her husband’s death not to be dramatised. She said the “royal family have to grin and bear” the depiction of them in the avalanche episode, but for her the incident was “a very private tragedy”.

Sunday’s intervention on The Crown is the latest from Mr Dowden, who previously contacted the BBC to voice his concerns that Rule, Britannia! might not be played at this year’s Proms.

In September, he wrote to national museum directors saying “the government does not support the removal of statues or other similar objects” after a debate started about how to handle colonial-era artefacts and those with connections to slavery.

The latest intervention followed a similar call by Diana’s brother Earl Spencer, who said: “I think it would help The Crown an enormous amount if, at the beginning of each episode, it stated that: ‘This isn’t true but it is based around some real events.’

“Because then, everyone would understand it’s drama for drama’s sake.

“Obviously Netflix wants to make a lot of money and that’s why people are in the business of making these things.

“I worry people do think that this is gospel and that’s unfair.”

The Crown has also been praised for presenting the British royal family as “real people”. Others have pointed out that Charles and Diana’s infidelity and marital problems are well recorded – including in interviews they both gave.

Netflix declined to comment, but a source said it had been widely reported that The Crown was a drama based on real-life events. – Guardian/PA