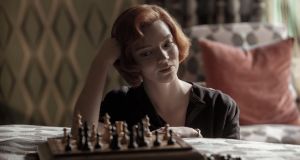 If you were to pick, at first glance, the television hit of autumn 2020, it would probably not be The Queen’s Gambit. The lush seven-part Netflix miniseries from the Godless creator Scott Frank and Allan Scott, released in October, doesn’t contain the obvious genre components or zaniness of a runaway Netflix hit. It’s the adaptation of a well-reviewed if not widely known 1983 novel of the same name by Walter Tevis, a cold-war period piece about an orphaned girl who is adept at chess – a cerebral and high-stakes game but not an activity renowned for its visual drama.

And yet, as of this week, The Queen’s Gambit is Netflix’s most-watched scripted limited series to date – a slightly convoluted and dubious record, given that Netflix measures a “view” as anything more than two minutes of content, but still, attracting 62 million account viewers during its first month is an impressive feat. (For comparison, Tiger King, the docuseries on the United States’ private exotic zoos that blew up at the outset of quarantine, drew 64 million account viewers in its first month.)

The Queen’s Gambit plays, especially in its early episodes, as a matured rendition of classic, beloved Roald Dahl coming-of-age stories

How to explain the surprising dominance of a period miniseries about one girl’s inexorable rise to the heights of international chess prestige? For anyone who’s fallen into it – and with the entire show released at once mere weeks before a bruising and protracted US election, The Queen’s Gambit was ripe binge material – the answer is in the immersion. The Queen’s Gambit is grade-A escapism: a classic sports-underdog story injected with Netflix capital, an uncomplicated pleasure of sumptuous, meticulous styling, a soothing portal into another world that believes in talent as the one invincible currency.

The Queen’s Gambit plays, especially in its early episodes, as a matured rendition of classic, beloved Roald Dahl coming-of-age stories. Orphaned at age nine by a car crash, Beth Harmon (played in the first episode by Isla Johnston) is sent to the barren Methuen Home for Girls in Kentucky; lonely save for one fellow orphan, Jolene (Moses Ingraham), and plied with tranquilisers, Beth hides out in a dingy basement and befriends the gruff janitor Mr Shaibel (Bill Camp), who introduces her to chess. Her prodigious skill is undeniable, her consumption by chess whole – by day she schools Mr Shaibel, inhaling lessons echoed throughout the rest of the series; by night she envisions boards and maneuvers upside-down on the ceiling, her mind an endlessly capable expanse.

By the second episode Beth is adopted by an unhappy couple in Lexington, Kentucky, whose marriage promptly disintegrates; Beth and her adoptive mother, Alma (a wonderful Marielle Heller, alternatively tender and arch), swiftly form a relationship of codependence on pills and chess-tournament winnings. The teenage Beth is played by Anya Taylor-Joy, breakout star of The Witch and, more recently, late-seasons Peaky Blinders and Emma and who, as every review has rightly stated, transforms oddball Beth into magnetic heroine in a true star-making performance.

A good portion of the series’ success is down to Taylor-Joy’s command of an enigmatic yet emotionally stunted lead, though much credit goes as well to the series’ ability to make chess sexy without sacrificing accuracy. (Since its release, numerous chess-board manufacturers have reported big spikes in sales, with increases anywhere from 215 per cent to 1,000 per cent). The show employed the former world champion Garry Kasparov and the New York City chess coach Bruce Pandolfini as consultants, making it “one of the best and most successful screen adaptations of the game”, according to the chess expert Dylan Loeb McClain in the New York Times.

But it spends little time with chess didacticism; you can watch the whole series and understand neither the rules nor the incremental pitches of momentum to feel the tension, strokes of genius, collapses. Chess is framed, under Frank’s direction, like a football match: a collision of strategies and styles with unbound alchemy.

Chess is also, in The Queen’s Gambit, a highly aesthetic pleasure that has launched its own mini-wave of dissections on the show’s fashion, its wallpaper, its interior design. The show prioritises beauty, a suffusive aesthetic gesturing at history if not embodying it, over stakes or, especially in its too-pat miraculous finale, dramatic surprise. Its weighting of pleasure over complication renders it, as Jane Hu wrote in Vulture, “the Forrest Gump of chess”, a “fake deep period piece” in which “everything potentially traumatising or problematic gets actively taken up as fodder for beauty”.

This applies as much to Beth’s evolving wardrobe as to the series’ supposedly darkest moments. Even as Beth struggles with addiction and the weight of greatness in later episodes, The Queen’s Gambit remains steadfastly serene. At her lowest, Beth spirals in an artful bender, a still of which is used as the enticing calling card for the penultimate episode – Beth looking skyward in tasteful underwear, splayed on a couch in a cavernous period museum, a willowy figure despite allegedly downing bottles on bottles of wine.

She rebounds, of course, as The Queen’s Gambit couples its fantasy of slick style with an engrossing, out-of-time, inexorable optimism. Like a rising tide, Beth floats up the chess ranks, generally unchallenged and almost entirely unblocked by her gender; male competitors and tournament organisers initially doubt her ability, or ask broadly about her singularity, but there’s no violence or glass ceiling. The Queen’s Gambit presents Beth’s skill, her almost unerring excellence, as a silver bullet, a magic pill – something that, once witnessed, cannot be disputed or unseen.

It’s that anachronistic yet deeply reassuring – and, yes, pleasurable – belief in Beth’s skills to speak for themselves that is perhaps the series’ greatest pull. Beth’s talent is the show’s one immutable, unstoppable fact. How nice, I and apparently 62 million other people have realised, it would be to live in such a world. – Guardian