How much damage might your money be doing on Black Friday?

Review: The Truth About Amazon paints the online giant as an insatiable profit machine 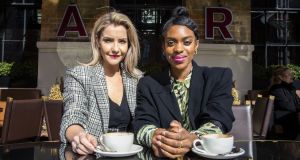 Black Friday is almost upon us, and, as most shops are closed, Irish consumers are likely to set new records for online purchases. Much of that business will go to Amazon, which, at this point in its evolution, is essentially a cross between an online shopping catalogue and a dystopian megacorporation from a cyberpunk novel.

So The Truth About Amazon: How to Shop Smart (Channel 4, 9.15pm) is a timely delivery. This is consumer telly done right: there are hints and tips on how not to pay above the odds on Amazon and a fascinating segment on why the ruthless retailer continues to struggle in the fast-fashion sector.

But this documentary, which continues next week, isn’t a hard-hitting journalistic takedown of the company; for instance, its founder, Jeff Bezos – essentially an Ayn Rand fever dream made flesh – isn’t even mentioned by name.

Instead the programme’s presenters, Sabrina Grant and Helen Skelton, show us how to click smarter and interview devoted Amazon customers, including a Birmingham mother whose house is filled with Bezos bling. They go on to reveal that the Buy Now button – the “buy box”, in industry parlance – is coveted real estate on the Amazon site and that it often pays to ignore it and instead scroll through alternative sellers, where bargains can be found.

There is also an exposé of the worrying black market in fake write-ups on Amazon, whereby unscrupulous sellers will link misleading reviews to a product. You may think you’re buying a four-star kettle when, in fact, the review is for a toaster sold by the same company (obviously done without Amazon’s permission).

In 2020 it’s impossible to make a consumer-affairs series about an internet giant without veering slightly into Blade Runner future-shock territory. And that is the case here as we learn how Amazon’s Alexa smartspeaker is the central prong of a strategy by the corporation to control an even larger share of the market.

“Amazon is using Alexa to control the whole process of buying,” says a digital-trends expert, James Moore. Were it any other company such a statement might come off as hyperbole. Yet, powered by its mighty algorithms, the portrait painted of Amazon is of an insatiable profit machine.

The unspoken implication of The Truth About Amazon is that, in giving more and more business to this ravenous retailer and thus increasing its dominance, the consumer is ultimately the one being devoured. We are all in the belly of the beast, clicking our way towards a sci-fi nightmare where Amazon is the one megaretailer to rule them all.