RuPaul’s Drag Race: do those with more junk in the trunk deserve the crown?

Reality TV round-up: midway through Drag Race, many queens have fallen, but Kameron Michaels is holding on, while Vanessa ‘Vanjie’ Mateo has become a pop culture icon 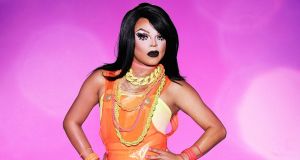 We’re midway through what has been an insightful if not turbulent 10th season of RuPaul’s Drag Race, with contestants unafraid to engage in fierce (in both senses of the word) political discourse. Topics have ranged from race to religion, with the usual wig-snatching, lip-syncing and hot-glue abuse, but throughout all this fervent behaviour, one Kameron Michaels has remained silent.

Many queens have fallen, including the electric Monique Heart, and yet Michaels is still wafting through the workroom like a buffed-up ghost, leaving no impression. When her talking-head segments pop up on screen there is a moment of puzzlement, a brief pause to remember exactly who she is, that she isn’t something that fell off Miss Fame and managed to survive in the dusty Interior Illusions Lounge.

In the time it has taken Kameron Michaels to utter more than two words and somehow win a challenge, Vanessa “Vanjie” Mateo has become an industry. A bona fide pop culture icon, her now legendary plaintive exiting cry of “Miss Vanjie! ” has morphed into a ritualistic incantation for fans. She is the most quotable queen in herstory, and yet she only made an appearance in a single episode. Her season-dominating influence is born out of her irrepressible personality.

Even the self-appointed Queen of Looks, Aquaria, has switched up her performance, showing her versatility. Her dead-eyed Melania Trump was the surprise of the Snatch Game, stealing the show from under the comedy queens’ powdered noses. The bratty New Yorker succeeds because she is fuelled by her own deluded self-belief: the Jedward of Drag Race believes she is already a winner and just needs the crown to complete the outfit. As a child of the internet, Aquaria cherry-picks content without context, becoming a Tumblr page made flesh, appealing to young fans who live in an isolated world of gifs and memes. Her personality is made up of awkward zingers and rehearsed reads, but there is something admirably wilful about her that make her so much more than just an Instagrammable face.

Whereas Michaels has done nothing memorable, remaining frustratingly passive, failing to even offer up much in the way of background or funny asides. As each episode passes she fades away like an underdeveloped Polaroid. She could be accused of falling victim to the ultimate Drag Race faux pas (not wig removal) – resting on pretty, which she has yet to be criticised for, slipping by unnoticed when the fireworks fly for others.

Queens such as Courtney Act and Manila Luzon were judged harshly in previous seasons for their reliance on “body-ody-ody”, but Michaels has eluded this by rustling up a few charming looks on the runway and flexing her muscles. Perhaps it’s because she’s a certain type of beauty and Drag Race fans are a certain kind of thirsty. From the very beginning, when the other girls flocked around her in the workroom admiring the tattooed body-builder’s “masc” appeal, Michaels has been the heartthrob of the season, and there is no denying that this emphasis on the body beautiful is a sticking point for Drag Race, with the shapelier Divine-esque divas so far failing to be recognised as America’s Next Drag Superstar.

Although, if this is the season that RuPaul decides that those with more junk in the trunk deserve the crown, will the attention-blackhole that is Eureka be a worthy winner? Outside of her comic chops and her unique way with a Spandex jumpsuit, she has been a divisive contestant. Having “caused all that conversation” and defeated her arch-nemesis the Vixen, she should aim to replicate Michaels and dial that overwhelming personality down to a murmur.

The conflict between Eureka and The Vixen saw Asia O’Hara morph from her previous unforgettable incarnation as a funked-up George Clinton sea-hag to a drag Oprah in time to chat with her ally the Vixen. In one of the most illuminating and important conversations in the entire series of RuPaul’s Drag Race, they spoke about the challenges they face as black members of the LGBT community. The Vixen, combative and frustrated, felt she was working hard to be seen, engulfed by the accepted loudness and whiteness of Eureka, but The Vixen was not made to be invisible and ultimately it was her unapologetic stance that saw her time end whilst the curiously mute Michaels disappears further into the competition.

Daisy Ridley: ‘The privilege I have? I don’t think so’