Serbia, Sweden, Australia all got through. But we don’t care, cos we’re already in the final 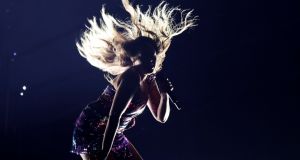 On Tuesday Ryan O’Shaughnessy restored our national pride by qualifying for the Eurovision finals. For most of us, that five-year absence was worse than the 800 years of British oppression.

Yes, folks, you can now put that picture of Patrick Pearse back on the mantelpiece, take out a tracker mortgage, look little Tommy in the eye and say: “We’re no longer s**t at Eurovision, little Tommy.”

Tonight’s second semi-final begins with the disembodied voice of Marty Whelan reassuring us that though we must repeatedly watch tourist footage of Lisbon, we’re in the final and everything is going to be okay. (For the record, I hear Marty narrating things even when I’m not watching Eurovision.)

Then four glamorous Portuguese women take to an oddly aquatically themed stage and start bantering with the assembled mass of patriotic Eurovision fans. “Are we all aboard?” they say, because of the aquatic theme. “Get on with it!” I shout.

Romanian angst rockers The Humans come out dressed all in white accompanied by masked mannequins garbed in vinyl gimp suits. These are, of course, bureaucrats from the European Commission, and their presence causes quite a stir. The Humans wail emotionally possibly because the excessive wind machine is making them feel very cold.

The Serbian entry features a caped amulet-wearing wizard, a trio of robed caterwauling women, and a grey bearded piper. I like their Enigma-esque folk-warbling, but I watch from behind my couch, fearful that these characters from folk legend would put a curse on me and I’d end up with disobedient livestock or donkey’s ears (checks byline picture for reassurance).

San Marino is represented by Jessika, the rapper Jennifer Brening and four actual robots, presumably her sons. “We are who are and who we are is who we want to be,” she sings. “We don’t have to listen because all that counts is you and me.”

This is good news, frankly, because what I want to be is a surgeon and don’t want to listen to the medical board when they say I’m “not qualified”. I also like the melody.

Growly Danish hunk Rasmussen and his burly chums arrive with literal sails billowing behind them crooning gloomily about the world being “for the taking” and “laying down their swords”.

Everyone looks at each other nervously. It sounds like the Danes were planning to kill everyone in the auditorium Game of Thrones-style before someone intervened. Soon a man is waving a flag and it’s snowing on stage. “Someone clearly left the window open,” says Marty, the legend.

Next, Russia’s Julia Samoylova, who was prevented from attending last year’s ceremony in Ukraine, insists she “won’t break” from aloft a glowing mountain as a topless hunk flails. The song is okay, but I think something else is going on. Midway through, I feel an inexplicable urge to leave the EU, jail Hilary and vote for Vladimir Putin in the upcoming referendum.

Colourful Moldovan pranksters DoReDos sing jaunty Balkan ska while acting out a 1970s sex comedy and going in and out of a large wardrobe in which someone appears to be literally walking the walls. Eventually from this Escher cube of madness, some nightmarish dancing doubles of the singers emerge, reminding us that we are all replaceable.

Jessica Mauboy from Australia gyrates around a fiery stage singing about how “love is stronger than fire”. From a scientific viewpoint, I think she misunderstands the burning point of love, but it’s a good song and I like how Australia’s presence annoys geography truthers. They just can’t accept that Australia is in Europe and has always has been in Europe.

Georgia’s besuited, Ethno-Jazz Band Iriao are big and manly and possibly just here to repossess the smoke machine that is filling up the stage with smoke. However, their song, For You, is exactly the sort I root for but never wins because it’s not the 19th century.

Like many young people today, plucky Polish hat-enthusiasts Gromee and Lukas Meijer seem to think being on fire is something to aspire to. “Help me to ignite the spark I feel inside. Light me up now baby,” Meijer sings, amid fiery plumes as Gromee dad-dances. I disagree with the worryingly flammable sentiment, but I can’t disagree with that groove.

Maltese electro goth Christabelle sings about breaking taboos in her song Taboo. The taboo she is currently breaking, apparently, is keeping a confused dancer trapped in a flashing electronic cube. She is fierce upset about being trapped in the cube but Christabelle doesn’t care, the crazy bitch.

AWS from Hungary play guitar-shredding heavy metal. There’s a quiet bit. Then a loud bit. A man yells. Someone runs over a bridge. It has all the makings of a short story about living in Thurles.

Latvia’s Laura Rizzoto’s Funny Girl isn’t funny at all. It is, in fact, a soulful belter delivered by red-robed Rizzoto against a blood red setting. (It’s worth noting that while male Eurovision singers largely look like they’re heading down the youth centre, the dramatically gowned female singers looking like they’re planning to rule the underworld for a few millennia).

Then we have Benjamin Ingrosso from Sweden’s excellent Timberlake-cogged falsetto-and vocoder funk. He sings about wanting to Dance You Off which sounds painful, quite frankly. “I’m grand, Benjamin. But thanks for offering,” I say to the telly.

Vanja Radovanovic from Montenegro sings melodramatically to the four white frocked daughters of his aristocratic patron (I may be imagining this backstory).

Lea Sirk from Slovenia does some actual synchronised dancing (as opposed to melodramatic swaying) while gamely wearing a sort of net. She and her dancers bravely soldier on through a bit where the music disappears and she gets everyone to sing along. I certainly sang along. “She’s going to catch her death in that outfit,” says Marty. “Good thing it’s warm here.”

Ukrainian Melovin emerges from an elevated piano like a lounge-bar Dracula. He wears one blue contact lens and ends his millennial whoop-filled performance back at the piano. Then, possibly due to another technical fault, the steps go on fire. Bravely he plays on – this year’s first martyr.

The night’s not over yet. There’s a big dance number and all around the country Irish people say, “It’s fine but it’s no Riverdance” (especially at the bit that references Riverdance).

There’s a historical bit about how after the 1974 competition the Paulo de Carvalho-sung Portuguese entry was used to trigger the revolution (seriously). We meet some performers from the Eurovision’s permanent security council (Italy, Germany, France, Spain and England are the biggest Eurovision funders and qualify automatically).

Yeah, I know. We don’t care. Ryan O’Shaughnessy is already in the final, thus returning our people’s lost honour. We will never not be in the Eurovision final again. Everything is going to be okay.

I’m buying an investment property and some bank shares tomorrow. I think I speak for The Irish Times when I say you should do the same.