The maddest song won Eurovision 2018, restoring some sanity to the crazy contest

Israel's Netta Barzilai has won the Eurovision Song Contest in Lisbon, bringing Israel its fourth victory in the glitzy pageant, watched by over 200 million people around the world. Video: Reuters 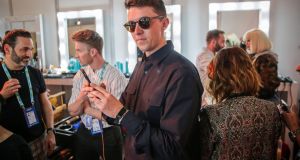 Ryan O’Shaughnessy representing Ireland with ‘Together’ backstage at the 63rd Eurovision at the Altice Arena in Lisbon. Photograph: EPA/Miguel A. Lopes

“We’re in with a big chance,” Marty Whelan’s voice told us as the competition began, over another aggressively promotional video for our host city, Lisbon. “That’s the way to look at it.”

Actually, there are many ways to look at Eurovision, but only one way to listen to the thing. This is a platform upon which nations perform before an audience of other nations, all of them hoping to stand up and be counted – preferably up to douze points.

In that battle it offers the audience either insistent ear-worms or pleasantly bewildering eye-candy and, much more rarely, both. With Israel’s entry – long expected to win, but, because of the emotional rollercoaster of voting, a big surprise nonetheless – the prize went to the maddest song, and that actually restored some sanity to the competition.

Above all things, Eurovision is an indefatigable party, to which the world’s supply of haze effects, lasers, miniature flags and reliably excitable fans must migrate. All of which made it a brave choice to begin the night with a relay of fado singing, Portugal’s art of lament.

That’s not a trivial point, because this year Ireland returned to the final – after a soul-searching, five-year spell in the wilderness – with a sensitive lament of its own. That came in the shape of Ryan O’Shaughnessy’s Together, a competently crafted song of tender heartbreak, which never stood a chance.

The top two contenders, Cyprus and Israel, went into the competition neck and neck with two outrageously punchy dance songs. The first was, essentially, a riot in a volcano (Eleni Foureira’s pummelling pop song, Fuego); the second was a pandemonium in either a pachinko parlour or a chicken coop (from Israel’s fantastic Netta).

Eurovision’s voters had quite the choice. Have you come to party or are you here to weep?

It should be no surprise that in this divided Europe, contestants went separate ways. There were songs like Spain’s Tu Canción, a love duet so inoffensive it would struggle to get arrested, or Lithuania’s adorable Ieva Zasimauskait whose lovestruck ballad ended with a hug from a silent extra so tender and practiced it should chill you to the bone.

Then there were songs like Slovenia’s Hvala, ne! (No thanks!) which at least seemed realistic about its prospects. Others, like That’s How You Write a Song from 2009’s record-setting vote grabber Alexander Rybak, were not so modest. “Shouba doop dap dap, Shabba dabba, hey,” reasons Rybak. “That’s how you write a song.” No, pal, that’s how you start a war.

Later, two of tonight’s four hosts – displaying weaponised elegance and that regulation Eurovision banter of strained jocularity – tell us that the accumulated songcraft of Eurovision, since 1956, would comprise, “seventy-three hours of music, straight.”  “Straight?” repeats one host with pantomime emphasis. “Well, that’s one way to put it!” Seventy-two hours to go.

Inevitably the music is the least interesting thing about the Eurovision Song Contest. The voting, on the other hand, is both riveting and mystifying.

The removal of Russia from the running this year threw the reassuring discipline of bloc voting into chaos. Freed to express actual preferences, the former soviet bloc seem to fall in line behind Benjamin Ingrosso, Sweden’s clean-cut answer to Justin Timberlake, a pretty boy with a wholly forgettable song who became a worrying contender for the crown.

Then the popular vote rearranged everything again.

Another of tonight’s talking points was SuRie’s Storm, the UK entry whose naggingly familiar hook promises, “storms don’t last for-eehhh-eehhhh-eehhhh-eehhhh-verrrr”, as though to remind everyone that the UK had not voted to leave Eurovision. That was less the issue, than how the performer – a consummate pro – recovered from an aggressive stage invader who grabbed her microphone and brayed a protest.

SuRie continued, however, without pause and now in fuller voice – “Hey brother, don’t give up!” – and the song became more rousing. Not enough, though. Eurovision may love a comeback, but the UK barely featured in the voting.

Everything else, by comparison, was defiantly unmemorable. Even Estonia’s Elina Nechhayeva, an opera singer buried up to her waist in a dress that shimmered with animations, like a Samuel Beckett character on a mushrooms trip, seemed lost between sound and spectacle.

Denmark summoned up a snowdrift to rustle around Rasmussen’s hirsute bawlers.

Finland went so far as to strap Saara Aalto to a magician’s revolving wheel, but sadly forgot the throwing knives.

Moldova, on the other hand, brought out the big guns with something between a conjuring act and a sex farce, where body parts tumbled in and out of opening panels, performed by singers in cocktail dresses and crushed velvet tuxedos. Now that’s what I call a party.

If imitation is the sincerest form of flattery, Bruno Mars, Ed Sheeran, Justin Timberlake, Beyoncé and even Macklemore must be feeling a little overwhelmed right now. That made some deliberately uncool offerings all the more striking. Hungary ventured forth with a prime slab of early-1990s thrash metal, replete with leaping pyro effects, crowd surfing and what must surely be the final use of the singer’s larynx.

The Netherlands, of all places, went with a yee-haw country song. Eurovision is a vast frontier.

The night’s first real contender, Israel’s Netta, could really belong anywhere. Performing a vocal like a deconstructed chicken bawk, in a hot pink kimono and black corset combination, beneath an early Bjork hairdo, in front of a wall of maneki-neko beckoning cats, and from behind an instrument that resembled the console of a spaceship, Netta is what people mean when they tell you to be your best self.

“I’m not your toy, you stupid boy,” goes the song’s bombastic hook. She didn’t come to play.

Ryan O’Shaughnessy, given the penultimate slot, is a sensitive and accomplished singer-songwriter with an ear for melody who can charm any audience – but the Eurovision Song Contest is hardly the time or the place.

A sweet performance, whose male dancers twist through the end stages of a love affair, it was free from pyrotechnics, but O’Shaughnessy’s was immediately followed by Eleni Foureira, a pyrotechnic in human form, and Fuego set the damn place on fire.

That it could not topple Netta is no shame, though. Eurovision has a new and rightful ruler and she is a riot.