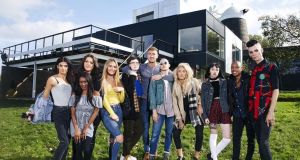 Genderquake: no space is given to learning anything much about this bright, entertaining bunch other than the fact that they are trans or gender fluid or identify as non-binary

Channel 4 may have offloaded Big Brother to Channel 5 after Jade Goody managed to transform a mundane argument about Oxo cubes into an international incident replete with burning effigies and parliamentary debates, but they haven’t given up on the premise entirely. As part of their season exploring modern notions of gender and identity, the two-part factual entertainment show Genderquake sees 11 young millennials from across the gender and sexuality spectrum living under the same roof for a week – AKA Katie Hopkins’s waking nightmare.

Therein lies the problem, Channel 4’s intentions may be somewhat admirable in attempting to address these concepts by creating an entire season around ideas of gender redefinition but there is also the distinct tang of exploitation. The introductory evening is familiar reality fodder, akin to the first night of a festival with the group excitedly babbling over each other, eagerly vying for attention with glamorous Campbell being the star of the show. While this evolves into valuable conversations and concerns about “passing” for another gender and discussions surrounding non-binary issues with opinionated Marcus wondering whether gender fluidity is “another hype like gluten free”, later a more focused narrative takes shape.

There is no space given to learning anything much about this bright, entertaining bunch other than the fact that they are trans or gender fluid or identify as non-binary

A questionable dramatic storyline is soon carved out around Romario, who is trans but has chosen not to discuss it with the group. The housemates find out, chatting among themselves about the apparent dilemma of him kissing conservative Irish girl Filomena. Romario ultimately fails to get the opportunity to tell his fellow housemates his own story as he is essentially “outed” by loudmouth Marcus who feels that it is his “duty” to reveal such private information.

There is no real validity to this episode, other than being a cheap twist for viewers and to show Marcus and Romario drunkenly screaming at each other in the kitchen like a facsimile of every late-night Big Brother showdown. This engineered drama feels uneasy and underhanded as though these kids (some of whom are quite vulnerable) are being poked into the kind of conversations destined to make headlines and cause online outrage. You can almost hear the faraway bashing of keyboards as 19-year-old Charlie’s parents say they are going to remortgage their house to pay for her gender reassignment surgery.

As the focus of the show is these provocative topics, the pressure is on the group members to act “worthy” rather than just be themselves. Which, in an unexpected outcome ends up making this year’s Celebrity Big Brother more successful in its exploration of gender. Whereas it’s generally accepted that Big Brother and its celebrity offshoot are an annual trash fire where we routinely sacrifice ex-children’s TV presenters, old heartthrobs and wannabe glamour models, stoking the flames of the tabloids, this year’s edition managed to be quite thoughtful and informative. Conversations flowed naturally about various topics ranging from masculinity, sexuality to success whilst also featuring Wayne Sleep being bathed like a tiny primate by Coronation Street’s Amanda Barrie.

In Genderquake there is no space given to learning anything much about this bright, entertaining bunch other than the fact that they are trans or gender fluid or identify as non-binary. Although interesting talks are had, viewers do not get the same opportunity to see past these labels (which is supposedly the objective) as Tom, the heterosexual furniture salesman from Barnsley does. Tom ends the show with the revelation that: “It doesn’t matter what a person wants to call themselves, life is too short”.

A sweet concept but one that is immediately undermined with the decision to follow up the show’s finale with a televised “debate” about gender (a tiresome excuse to ask trans people to justify their existence again) featuring everyone’s favourite embarrassing reactionary granny – Germaine Greer and the conservative controversy addict Caitlyn Jenner.

For all its progressiveness, unfortunately Genderquake amounts to nothing more than Jeremy Kyle for M&S shoppers. With the discussion presented by Channel 4 news anchor Cathy Newman it exudes the right amount of smugness rather than cheap crassness, so liberal viewers can delude themselves into thinking they’re several postcodes away from the tawdry world of the Big Brother house when in fact they’re the ones who are the neighbours from hell.