Eurovision 2018: Everything you need to know for the final

Eurovision 2018 odds, when will Ryan O’Shaughnessy sing, is he in with a chance and who else can win 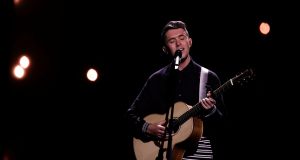 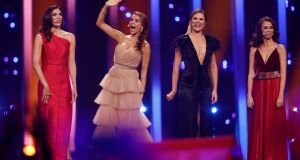 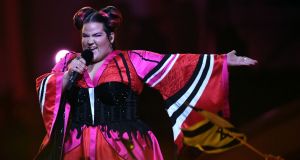 When is the Eurovision final on?
The Eurovision Song Contest 2018 final, taking place in Lisbon, Portugal, begins at 8pm Saturday night on RTÉ One, with Marty Whelan providing the commentary. RTÉ 2FM will also bradcast the show. Over on BBC One, Graham Norton will do the honours. Performances of the 26 competing songs are scheduled to last about two hours, followed by a voting window and the live presentation of results.

We made the final?
Yes we did, or Ryan O’Shaughnessy did, singing Together. In Tuesday’s  semi-final, he was the 10th and final name to qualify out of 19 acts. This is the first time that Ireland has qualified for a Eurovision final since 2013.

Tell me more about Ryan O’Shaughnessy
Ireland’s Ryan O’Shaughnessy is a 25-year-old singer-songwriter from Skerries. From the age of eight for nearly 10 years he played Mark Halpin on Fair City, and focused on his musical career from the age of 17. He made it to the finals of Britain’s Got Talent and The Voice of Ireland and was featured in 2013 on the RTÉ songwriting competition The Hit.

Is he in with a chance?
Well, anything is possible, and the betting odds suggest a strong showing. Ireland has seen a major surge in the betting odds since qualification on Tuesday and are currently tipped to finish third of 26th competitors in the final; if this happens, it will be Ireland’s first top 10 finish since Jedward came eighth in 2011 with Lipstick.

How does the voting work
The results are chosen by a combination of country jury voting and public voting. The juries vote on Friday night’s dress rehearsal (also referred to as the jury final) and the public votes live on Saturday night.

Each of the participating 46 countries has a professional jury who rank its top 10 performances, awarding points of 12, 10, eight, seven, six, five, four, three, two and one to its favourites songs in descending order.

Viewers from each country also vote via phone or SMS - called televotes -  awarding points (1 up to 12)  to their favourite songs. Then, all the results from each country’s public votes will be combined to give one overall Eurovision viewer score per song.

Tell me about the presenters
This year’s on-camera hosts are four women: TV presenter Filomena Cautela, TV host Sílvia Alberto, NCIS: Los Angeles star Daniela Ruah, and TV presenter/actress Catarina Furtado. Last year’s competition in Ukraine featured three male hosts and was the first time since 1956 that there was no female presenter, so the Portuguese women-first choice can be considered a response to this.

How much does it all cost?
While the European Broadcasting Union will not comment directly on the budget to produce the three 2018 Eurovision broadcasts (two semi-finals and the final), saying this is information of a “sensitive commercial nature,” the budget has been reported to be in the €20 million to €23 million range, shared between the host broadcaster RTP and the other participating broadcasters.

What are Australia and Israel doing in a European singing competition?
Eurovision’s definition of Europe has long been broader than most people expect. The right to compete comes with active membership in the European Broadcasting Union. Israel has competed in the contest since 1973 and has won three times; and Australia has competed since 2015, and finished second in 2016.

What will see for the interval act?
Headlining this year’s interval act will be 2017 winner Salvador Sobral, who has recently undergone heart surgery. He will perform his winning entry Amar Pelos Dois and a new single from an upcoming album. The interval act will also include the fado singers Ana Moura and Mariza in a rare combined performance.

Anybody making the headlines for all the wrong reasons?
Among the headlines around this year’s Eurovision is the non-qualification of Russia for the contest final. Russia has competed 21 times and only failed to qualify once before. This year’s Russian singer Yulia Samoylova was meant to compete last year but the country pulled out over a dispute with host country Ukraine.

Okay, who’s going to win?
One of the more talked about songs in this year’s contest is Toy from Israel’s Netta, who is noted for her exaggerated facial expressions and doing a sort of chicken dance while making clucking sounds. Once top of the bookmaker’s polls to win, it has been surpassed by Cyprus’s Eleni Foureira with Fuego (Fire).