‘People have no idea what I put up with,’ seethes Majella, in a new ‘B&B Road Trip’ series 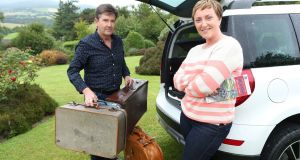 Road trip: the B&B show that follows Daniel and Majella O’Donnell is back for third series

“Well, here we are,” says Daniel O’Donnell, the most fervently desired and exquisitely unattainable man in Ireland. “Who would have thought we’d be back for a third go?”

Well, I have to admit, I had my suspicions.

Daniel and Majella’s B&B Road Trip (RTÉ One, Tuesday, 8.30pm), now on its third go, is the epitome of high-concept programming. It involves Ireland’s first couple, Daniel and Majella O’Donnell, visiting Irish B&Bs by way of a road trip. The purity of that idea is so perfect it feels redundant to embellish. But, alas, we must.

The day of Daniel and Majella’s arrival is an occasion of fuss, preparation, exposed family tension and, the closer it looms, near hysteria. These are the classic stages of O’Donnellmania.

It might spare their blushes if the O’Donnells themselves were not aware of the fealty and supplication they inspire among the nation’s lodging houses. But because Daniel and Majella also control the show’s voice over (just as Daniel seems to supply driver Majella with the voice of the Sat Nav) they narrate everything with a kind of godly omniscience.

“The welcome surprises continue at the 19th Lodge,” Daniel says of their first appointment, as though it was no surprise at all. Given they have already been heralded with their show’s logo stencilled across the beach in 40-foot-high letters, there might have been a tip-off.

The strange discrepancy of the show, however, is that while Daniel and Majella can be fluently ironic about this level of deference (“The Tom Watson Suite”, coos Daniel, as though he didn’t have the power to have Tom Watson killed. “Nothing less for us.”).

But you don’t get that sense from their hosts, whose investment in their visit is entirely and often touchingly serious.

Invariably this involves one married couple welcoming another, in a visit that exposes frictions in both marriages. “She doesn’t ever make me a cup of tea!” one of the proprietors of Rossbeigh Beach House in Kerry will say, while his wife, Brenda, reprimands him with an “Ah, Jesus, Michael!” and peals of embarrassed laughter.

“It’s probably one of the bigger occasions in her life,” admits her son. “Bigger than getting married to my father.” Steady on.

The fun of the show is to watch the O’Donnells poke fun at themselves and at each other, sometimes with a genuine and winning irascibility (against Daniel’s performed preciousness, Majella can be magnificently surly – take note, O’Donnellmaniacs!), but often as stiffly as a scripted sitcom.

Out on the Ballybunion golf course, playing through hail only slightly smaller than the golf balls, Daniel says: “I hope there’s nobody watching us; they’d think we’re off our heads.” But that is exactly why we’re watching them, and they play up to it shamelessly.

To some hosts a visitation from the O’Donnells is an almost religious experience, requiring hushed devotion to a long-worshipped idol. To others it comes with the tingles of flesh and blood.

Either way, Daniel has wicked fun toying with his saintly image. In Ballybunion, for instance, host James presumes Daniel is a teetotaller, reporting news of Daniel’s porridge to the kitchen in astonishment: “He’s putting the Baileys in. He’s having the Baileys.”

Later, following Daniel’s game efforts on the exercise bicycle of a Disco Spin class (at which one canny spinner preserves a T-shirt he dries his face with, like a sweaty Turin shroud), B&B owner and fitness fanatic Brenda confesses, “I did notice he got his bum up and down a few times.” I bet you did, Brenda.

That doesn’t make Daniel any more attainable, sadly – he’s a happily married man. But it does make him seem more earthly.

“They don’t know what I have to put up with,” seethes Majella of Daniel’s besotted followers, shortly after Brenda has advised him to run for President. “They don’t know.” As the road trip continues, they’re getting a better idea.