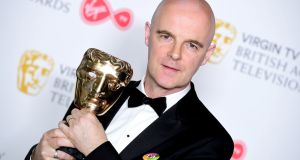 There were two Irish successes at the Bafta TV awards on Sunday night.

O’Byrne dedicated his award to murdered school boy Rhys Jones, whose father, Steve, he played in the ITV drama. Rhys (11) was gunned down on his way home from football practice in Croxteth, Liverpool, in 2007.

Looking stunned as he collected the award at The Royal Festival Hall in London, the actor said: “It’s kind of difficult to get an award, to play somebody who is living and who is at home tonight, like the nights of the last 10 years, suffering grief at the loss of their child.”

He thanked Steve Jones and Rhys’s mother Melanie and said: “I would like to dedicate this to your young child Rhys, who was tragically lost.” The actor thanked the city of Liverpool for embracing the story and expressed his gratitude to the crew “who knew that they were dealing with something that was such a tragedy”. The actor said he had not prepared a speech, adding: “I’m in shock.”

O’Byrne also made a personal statement: “I’d like to thank the staff at the Liverpool Women’s Hospital for looking after my fellow Irish citizens, who come there in distress, daily. Thank you Britain for looking after our women in their time of need.”

Windsor (20) won for her role in Three Girls, a drama about the Rochdale child sex abuse scandal, which also won the best mini-series prize at the ceremony.

It told the harrowing story of the children who were groomed, sexually abused and trafficked by British Pakistani men in Rochdale.

Foy had been nominated for a second consecutive year for her role as the Queen in The Crown, while Newton was nominated for Line Of Duty.

Also in the running in the category was Sinead Keenan, who received a nod for playing the mother of Rhys Jones in Little Boy Blue.

Collecting the prize from Sherlock star Martin Freeman, Windsor said: “Three Girls was born out of the courage of the real three girls, and the real Holly, Amber and Ruby, who told their story over and over and over and told it again to us.

“I just want to say thank you for recognising how selfless that is and how brave that is.”

It picked up its first film Bafta for Ava DuVernay’s documentary 13th in 2017.

Collecting her prize, Kirby said: “I just felt like the luckiest person in the world to get to play a character who was so colourful, vivid, brave and strong.

“This is for Margaret, wherever she is.”

She said: “I don’t want to ignore the elephant in the room but it would be crass and inappropriate to discuss my fee, so let’s just say I’m going to be putting in half the effort.”

Alluding to the raft of sexual harassment allegations made against high profile figures in the TV and film industry, the comedian hailed the casting of Jodie Whittaker as the first female Doctor Who, saying: “I think Jodie is the perfect choice...if anyone has experience fighting off grotesque monsters, it’s an actress.”

BBC Three comedy This Country picked up two gongs at the ceremony, with star Daisy May Cooper landing the female performance in a comedy programme prize, while the show won the scripted comedy award.

ITV2 dating show Love Island scored a Bafta in the reality and constructed factual category but it was defeated by Blue Planet II for the Virgin TV must-see moment prize.

The scene of a mother pilot whale grieving her young scored the only prize voted for by the public.

Collecting it on stage, Sir David Attenborough said: “I speak for all of us when I say we set out to try and show the seas, the oceans for what they are, their beauty, their wonder, their splendour and intricacy but also the truth about what we are doing to them.

“And the fact that one particular moment rang a bell in the minds and consciousness of people in this country is something that pleases all of us more than I can say.”

Former footballer Rio Ferdinand gave a moving speech as his programme Rio Ferdinand: Being Mum And Dad, about the loss of his wife Rebecca to cancer, won the single documentary Bafta.

Standing at the podium with the gong, he said: “I’m normally quite used to picking up trophies but I don’t have to speak after.

“It’s been quite a crazy whirlwind experience, I didn’t do this for any other reason than my three kids.

“The worst thing to come out of this is I get quite emotional now but it’s allowed me to speak and show vulnerability that people aren’t used to because as a sportsman you’re built up to be indestructible.”

He described the documentary as a “snapshot of that time of sadness”, but said it has helped him heal.

Referring to his “beautiful girlfriend” Kate Wright, he said: “We are making steps in the right direction.”

Peaky Blinders was named the winner of the drama series category, while

Sean Bean won the leading actor prize for Broken. Journalist Kate Adie was honoured with the Bafta Fellowship award at the ceremony.

She took to the stage with her left wrist in a red sling, explaining it was due to “an accident in a pothole in a pavement”.

Speaking about the importance of reporting, she said: “It’s essential in a democracy, we tell truth to power.

“We tell it like it is and in these times that is more important than ever.”

After Adie departed the stage, Perkins said: “You don’t get disaster zone reporting like that any more, not unless it’s Olly Murs trapped in Selfridges.”

Murdered For Being Different

Rio Ferdinand: Being Mum And Dad

Female Performance in a Comedy Programme

Daisy May Cooper (This Country)

Male Performance in a Comedy Programme